Medomak Valley boys basketball team defeated Mt.Blue 56-47 in the battle of the big cats in Waldoboro on Jan. 4. The Panthers took the lead for good midway through the first period, but the Cougars hung around, pulling within four with 1:49 to play. Patrick McKenney sank eight of 10 foul shots in the final 1:21 to pace Medomak to victory.

McKenney led all scorers with 28, and Trevor Brown added 16 for the Panthers. The Cougars were led by Jacob Farnham 14 and Zach Poisson and Bradley Shamba 11 each.

Class A Brunswick robbed the Eagles nest for a 58-19 win on Jan. 4 in boys basketball action, Brunswick was led by Evan Kilfoil 14 and Noah Goddard 12. Lincoln Academy was led by Jacob Masters, Chase Crockett and Zak McKenna with 4 each.

Brunswick girls defended their Dragons lair for a 62-57  win over Lincoln Academy on Jan. 4. The Lady Eagles trailed 32-20 at the half, before clawing their way back to pull within two. Brunswick was led by Logan Brown 2ith 20, Lexis Guptill 15 and Morgan Foster 11. LA was led by Ellie Mathews 20, Maddy York 16 and Payson Kaler 14.

Carrabec girls basketball robbed the Wolverine den for a 61-21 win on Jan. 4. The Cobras were led by Cheyenne Cahill with 20 points. Wiscasset was led by Zoe Waltz 9 and Kylie Peoples 7. 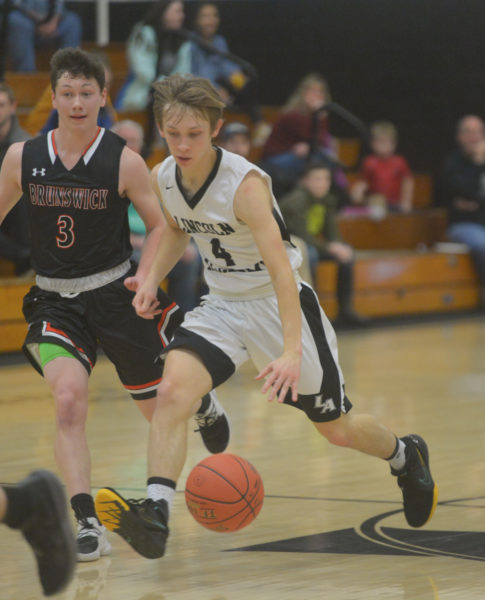 Chase Crockett brings the ball up the court for the Eagles. (Paula Roberts photo) 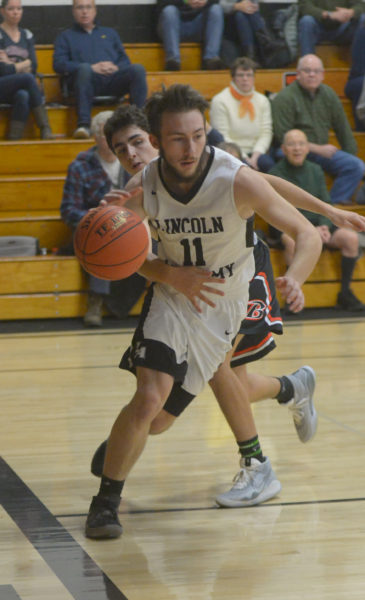