Boothbay Region boys and girls basketball teams were victorious over Wiscasset on Jan. 11 in the Seahawks nest. Boothbay boys defeated Wiscasset 69-20, led by Gryffin Kristan with 21 points, Finn Harkins 13, Connor Wenners 12 and Dylan Plummer 9. Wiscasset was led by Spencer Smith-Pinkham and Dylan Akers with 7 each.

Boothbay girls defeated Wiscasset 54-15 in the second game of a double header on Jan. 11. The Lady Seahawks were led by Magen Burge with 14 and Anna Gosselin 13. Wiscasset was led by Laila Dicus with 7 (20 rebounds).

Olivia Marshall gets the pass off under heavy defensive pressure from Abby Orchard. (Paula Roberts photo) 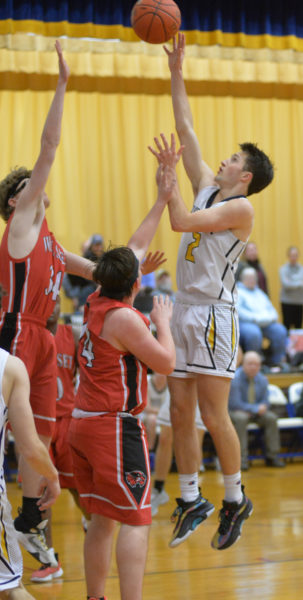