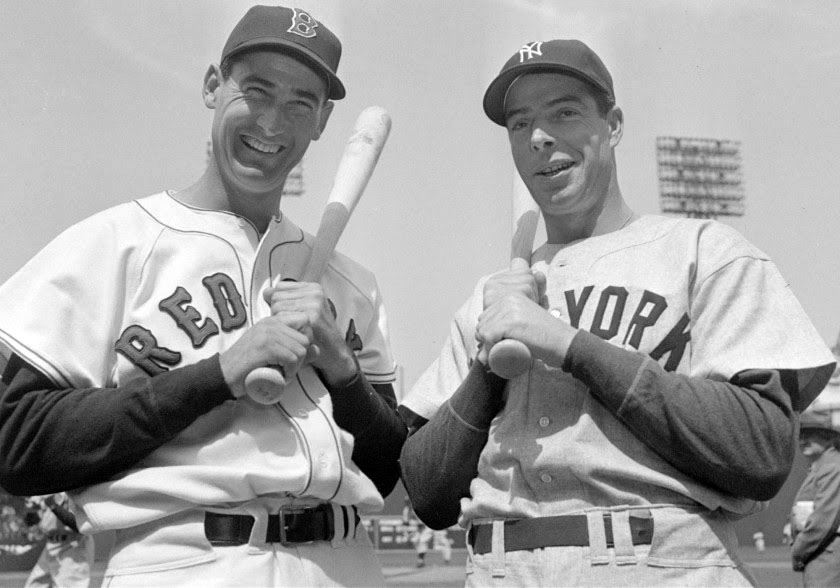 The 1941 season was full of greats like Boston’s Ted Williams and New York’s Joe DiMaggio.

The 1941 Major League Baseball season is one of the most legendary in the game’s long history. These days, players and fans who remember the events of that season are much fewer, but even those of us who weren’t around at the time have read about this season and consider it to be one of the most exciting seasons ever played.

There are a few reasons that fans young and old look back at 1941 and lament that the game has never been the same since, and will never be the same again. People speak of this fabled season as the peak of the sport, and in some ways it was. It is looking increasingly likely that we will never see a player bat over .400 ever again, as Ted Williams did for the Boston Red Sox that year, or that we will ever see a hitting streak like Joe DiMaggio’s 56-gamer. (DiMaggio won the MVP that season. I feel that hitting .400 is much more impressive, but that just might be my bias as a Red Sox fan showing.)

It was DiMaggio’s Yankees that won the World Series, beating the Brooklyn Dodgers in a classic New York matchup typical of that age, where many of the best teams were all condensed in New York. Nowadays, these iconic New York franchises are scattered across the United States, with the Dodgers in Los Angeles and the Giants in San Francisco, another of the drastic changes to have happened to the game since 1941. Fans will shake their heads, fondly remembering a time when loyalty mattered in baseball, when a player played for one team his whole career unless he was traded and teams remained in the cities that were home to their loyal fans.

1941 is often used to represent an entire age of baseball, the age before multimillion-dollar contracts, steroids, cheating scandals, and baggy uniforms. Baseball has never been the same as it was before World War II, but I am always surprised when fans say baseball was better before World War II. I’m not sure that it was. There is a solid argument for the idea that baseball was more popular with your average American back then, but I still wouldn’t sacrifice the changes that have been made to the game, for I think they have been, for the most part, overwhelmingly positive.

The biggest difference between then and now is, of course, the discarding of the color line, thanks to Branch Rickey and Jackie Robinson. Many of the greatest players of the last 50 years would not have been able to play in the majors in 1941, and with today’s stars being from all over the world, this key difference has done wonders for baseball at home and abroad.

Another difference that fans actively complain about is the issue of player loyalty. I was 12 years old when Jacoby Ellsbury, the Red Sox center fielder, became a free agent and signed with the New York Yankees. This was really quite upsetting to me and young Sox fans everywhere, but at the time all I could think about was how this never would have happened in the pre-free agency era (before 1976). If Jacoby had played in that era, no little Sox fans would have had to have their hearts broken. But the players back in the day were not just more loyal to the team that had drafted them.

You can be sure that players in the ’40s and ’50s would have jumped at the opportunity to play where they wanted, if only the owners had let them. I won’t go into the nitty-gritty of it, but thanks to the reserve clause, a player’s only options were to play for the team he was drafted by, ask for a trade (a request the owner could ignore without consequence), or be unemployed.

In any other business, if a worker is unhappy at their place of work, they are free to seek employment elsewhere, and it was silly, really, that baseball players were denied this. And this rule wasn’t to protect the fragile feelings of little boys and girls, it was so the owners could make more money, because baseball is a business, which it has always been, except now it is a business that more equally benefits all those selling the product, versus the 20-30 owners of MLB teams.

I love baseball history, and the 1941 season was pretty cool, but I also think that baseball has never been better than it is right now, and I expect and hope the game will only grow from here. The past is full of great stories, many of which are written about here, but it is not something we should try to return to. Baseball history is interesting, but like all things, the future is just as interesting and much more important.