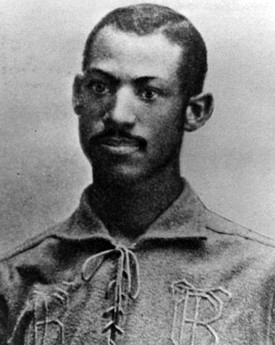 Jackie Robinson is famous for breaking the color barrier in Major League Baseball when he debuted for Branch Rickey’s Brooklyn Dodgers in 1947. Robinson’s story is inspiring and he is one of my favorite players, despite having played decades before I was born. Because of his fame, impact on the baseball world, and involvement in the civil rights movement, many people assume Jackie Robinson was the first Black player to play in the major leagues, but this is not true, though he certainly was the first in a long, long time.

The title of first Black player in the majors goes to an often overlooked ex-law student from Toledo, Ohio named Moses Fleetwood Walker, who caught for the Toledo Blue Stockings all the way back in 1884 (the same year Charles “Old Hoss” Radbourn was destroying records with his arm, for returning readers), hitting a solid .263 in 42 games.

Walker’s career in the majors was short, and he spent the next few years wallowing in the minors, but his exclusion from the majors was not due to his performance on the field. Like Jackie Robinson decades after him, Walker encountered more than his fair share of racism from fans, opponents, umpires, owners, managers, and teammates.

Pitcher Tony Mullane, one of the best of the 19th century, was a teammate of Walker, and was known to ignore the signals thrown down by Walker. In an 1883 exhibition game between Walker’s Blue Stockings and the Chicago White Stockings, Cap Anson, Chicago’s player-manager and bona fide superstar, loudly and publicly voiced his displeasure at playing with Black players and, though he played in the exhibition (he didn’t want to forfeit his cut of the ticket sales), he was quoted afterward as having said, “I will never step on the field that also has a (Black person) on it.”

What you need to know about Cap Anson is that he was Babe Ruth before there was Babe Ruth. The man was huge (just like the Babe) by 19th-century standards, and over the course of his ridiculous 24-season career, the man hit .334, including .380 three different times. Anson was baseball’s first real superstar and people tended to do what he said. If he did not want to play against Black players, you better believe those National League rosters became all-white.

Of course, Anson was by no means the only racist in baseball, and by the time 1887 rolled around, all of the owners in minor and major league baseball had adopted a “gentlemen’s agreement” or unwritten rule which kept Black players out of the majors. This “secret” agreement was in effect until Branch Rickey signed Jackie Robinson 60 years later. This agreement was not acknowledged, although after Plessy v. Ferguson in 1896, they really didn’t need to keep it on the down low anymore.

This interaction with Cap Anson is what I find so interesting about the Moses Fleetwood Walker story. Cap Anson was racist and used his platform to push Black players like Walker out of the league, but imagine if he didn’t. If Cap Anson had been neutral on the subject, you can be sure that history would have marched right on and Walker would have been dropped from the majors anyway. But what if a superstar of that size, the most famous baseball player in the world, had taken the opposite stance, had been anti-racist?

It’s impossible for any one person to fight centuries of racist history, but I can’t help but think that if Anson (a player-manager, remember) had fought for Walker, had shown him support in front of the media, baseball in the 19th century would have looked very different. I honestly believe Anson had that much influence. He shaped the way baseball was played professionally in those formative years, and he shaped who played it.

What that means is this: the players of the 19th century (Anson disproportionately) were responsible for what baseball looked like entering the 20th century, and the actions of Cap Anson and others affected generations of Black ballplayers, but it could have gone the other way.

It didn’t, of course. America would have to wait for Branch Rickey to sign Jackie Robinson, and he is the one we remember, as we should, but we should also remember Moses Fleetwood Walker.

The reason we remember Robinson is because we want to. He persevered, he overcame, he was joined by others quickly, and within a decade, the majors were fully integrated, a major victory.

Walker is forgotten in part because what happened to him was not nearly as noble and heartwarming. He and other Black players were pushed away and kept away for decades, a major loss. It’s important to remember the wins, like Jackie Robinson, but we should also remember the times when the actions of the baseball world were less than savory.