Medomak Valley boys basketball team won the battle of the big cats, 77-45 over  Belfast on Jan. 4. The Panthers out scored Belfast 21-9 in the second quarter to put the game away early. Medomak had their best team outing of the season with unselfish play. Trevor Brown scored 23 points, Patrick McKenney 21 (six 3’s) and Jake Bickmore 15 to lead the Panthers offense. Belfast was led by Keegan Megowan with 16 and KJ Payson 13.

Medomak girls basketball team robbed the Lions den 48-14 on Jan. 4. The Lady Panthers jumped out to an 18-0 first quarter lead. Three players scored in double figures, including Maya Cannon with 15, Alyssa Creamer 12 and Autumn Ripley 11. H. Tripp led Belfast with 6. Medomak improves to 6-1 with the win

Lincoln girls defeated Morse 47-38 on the road on Jan. 4. The Lady Eagles led by one at the half, before going on a 14-7 run in the third to take the lead for good. Lincoln was led by Grace Houghton with 13 points and Payson Kaler 11. Morse was led by Maddy Werner with 11.

Boothbay boys basketball team improved to 2-2 with a 44-30 win over Hall-Dale on Jan. 4. The Seahawk were led by Gryffin Kristan with 9 and Ashton McLellan 7. The Bulldogs were led by Cantor Burke with 6. 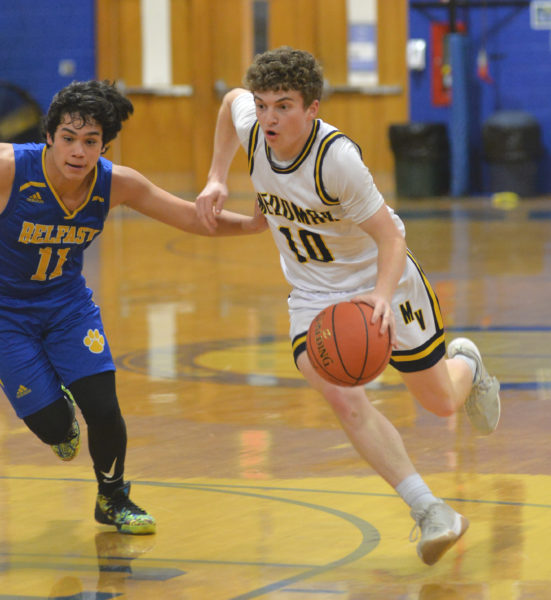 Patrick McKenney brings the ball up the court for the Panthers. (Paula Roberts photo) 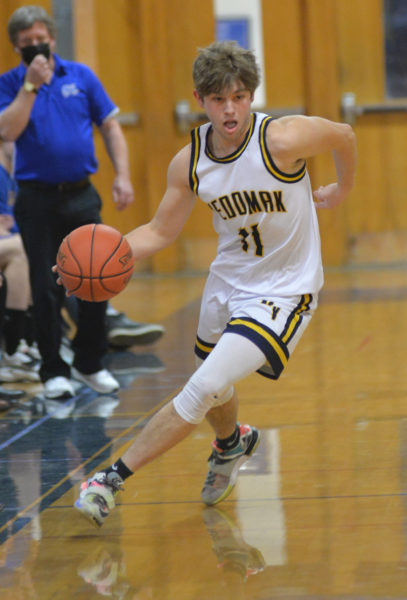 Blake Morrison brings the ball up the court after stealing the ball from the Lions. (Paula Roberts photo)