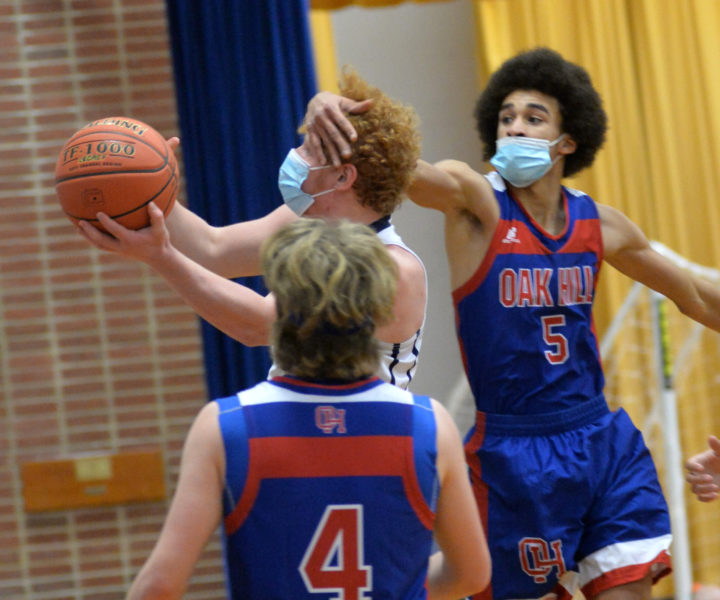 Kayden Ames drives to the hoop for Boothbay, as Raider Ramon Spearman grabs him by the head. (Paula Roberts photo)

Medomak Valley boys basketball team defended the Panther den for a 72-48 win over Mt.View on Jan. 11. Three Panther players scored in double figures in the win, including Trevor Brown with 24, Patrick McKenney 18 and Jacob Craig with a career high 17. Mt.View was led by Draiden Furrow with 18 and Wyatt Evanson 10.

Boothbay boys basketball team squeaked out a 51-50 win over Oak Hill in the Seahawks nest on Jan. 11. The game was tied with 3:30 to play, before Boothbay rallied for three straight hoops from Jordan Carrier, Kayden Ames and Lucas Hardwick to take the lead for good. Drew Meader scored the game winner with 10 seconds to play on a Ames pass. Kayden Thompson pulled the Raiders within one with a 3-pointer with less than a second to go. Boothbay was led by Sullivan with 13 points and Hardwick 12. Oak Hill was led by Jackson Arbour with 14 and Caden Thomson 13.

Mt.View girls basketball team defeated Medomak Valley 54-35 on Jan. 11 in Thorndike. The Mustangs were led by 22 points from Hannah Coolen with 22, Ari Bradeen 11. The Lady Panthers were led by Kytana Williamson with 8 and Katherine McKenney 7. Medomak was down several key players in the loss, including Addison McCormick and Maya Cannon.