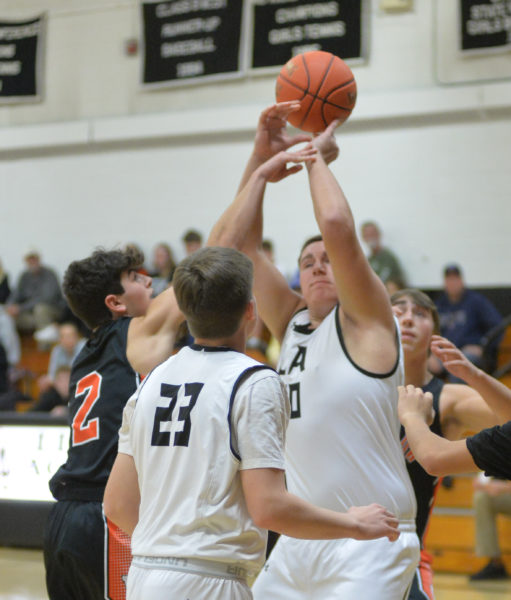 Braxton Crockett passes the ball out to the win for the Eagles. (Paula Roberts photo)

Boothbay boys lost 71-54 on a long road trip to Old Orchard Beach on Dec. 20. The Seahawks were led by Griffen Kristan with 21 points, and Finn Harkins 16. OOB was led by Landon Johnson with 25, and Richie Delise 15.

Boothbay girls lost 52-17  to Old Orchard Beach in the Seahawk nest on Dec. 20. Boothbay was led by Anna Gosselin with 9.  OOB was led by Elise McNare with 27 and Pessy Fergusson 17.

Medomak Valley boys basketball defeated Camden Hills 71-58 in the  Panthers den on Dec. 20. Medomak was led by Gabe Lash with 26 and Kory Donlin 20. Camden was led by N. Ames with 16.

Medomak girls lost a tough game in the final minutes of play to Camden Hills 58-51 on Dec. 20 in the Panthers den. Medomak was led by Kytana Williamson with 22 points and Addison McCormick 17. Camden was led by Bailey Curtis with 17, Leah Jones 14 and Kirsten Jones 10.