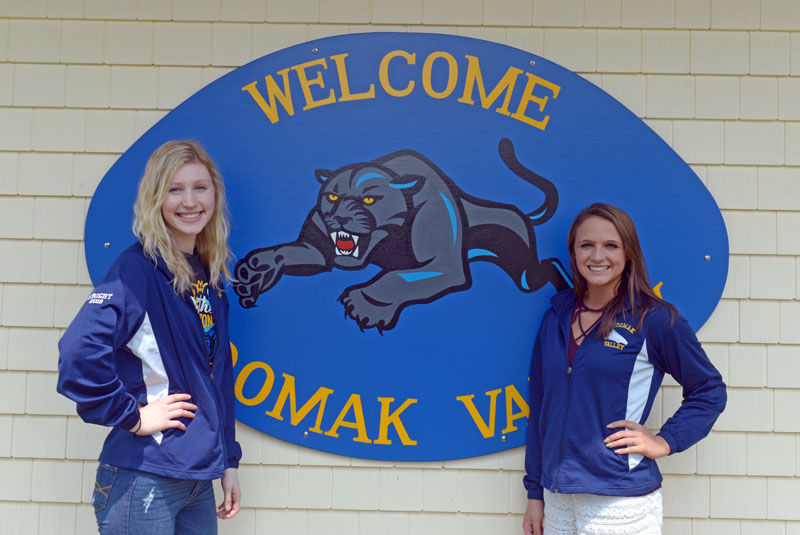 Medomak Valley cheerleaders Megan Wright and Adrianna Wadsworth have cheered together for five years. They are heading off to rival Division I schools to cheer in the fall. Wright will attend the University of New Hampshire and Wadsworth the University of Maine. (Paula Roberts photo)

“It is good to see kids moving on from our program and having the confidence to try out for a college team,” coach Heather Simmons said of the pair. “They are both extremely talented. They will contribute a lot to their college teams.”

“They are the first from Medomak Valley to cheer for a Division I school,” Simmons said. “I think it speaks a lot about our program. I’m proud of them.”

“It will be weird,” Wadsworth said of competing against Wright.

UMO and UNH cheerleaders will attend the same cheering camp at Boston University this summer. “It will be the first time we’re not on the same team,” Wadsworth said.

They will be on opposite sidelines when the Black Bears and Wildcats face off on the gridiron this fall, as the cheerleaders from both colleges travel with the teams. They will meet up at Daytona Beach in Florida in the late fall to compete against each other at a national competition.

Both girls participated in seven-hour tryouts. For Wright, it was one grueling seven-hour day. For Wadsworth, it was four hours one day and three the next.

The girls said coaches looked at their tumbling and stunting skills, their attitude, how they got along with others, and their ability to get the crowd going.

Wadsworth said her tryout was for the fall cheering team. She will have to try out again for the winter season. “I have a better chance of making the indoor team, because of learning team skills and routines,” Wadsworth said of cheering in the fall.

To cheer in college has been a lifelong goal for both young ladies. Wright got involved with cheering because she loved tumbling. She had always been attracted to the sport, and as a 1-year-old wore a Patriots cheering outfit for Halloween.

She made the journey to Lewiston every Friday for years to improve her tumbling skills. She started sideline cheering as an 8-year-old and started cheering as a seventh-grader before transferring to Medomak her eighth-grade year. Both dedicated girls attended the optional summer cheer boot camp at Medomak to improve their skills.

Wadsworth has been cheering since seventh grade. “It has been a big part of my high school experience,” the senior salutatorian said.

Of balancing a college workload and cheering, both girls said cheering under Simmons and Rachel Coor has prepared them well.

“We will have to manage our time,” Wright said.

Wadsworth said they will do well if they apply what they learned in high school, from two-hour practices during the week, cheering at games, doing homework before practices, and sometimes seven-hour practice sessions on a Saturday.

“You have to have dedication and really good teamwork. You have to persevere” when things are not going well, Wright said.

“You have to love it, the feeling of performing, and have the desire to be perfect,” Wadsworth added.

Wright found out she made the UNH team on May 21, and still pinches herself to make sure it is not a dream. “I keep saying to myself, I’m a college cheerleader,” she said with a big grin.

Simmons “is a huge reason why I kept cheering. Not only were we a team, she made it like a huge family,” Wadsworth said.

“If she could put in the time, so could we,” Wadsworth said. “Sometimes, when we lost excitement and passion, we did it for them, because we knew how much it means to them.”