The Warren Rec Panthers placed first in the grade 4-6 Peewee division 1 at the Maine Elementary/ Junior High School Youth Cheering championships on Sun., March 5 at the Cross Insurance Center in Bangor. The yearly event is sponsored by the Calais Recreation Department.

These “18 girls competed and left their heart on the floor, two weekends in a row” and took “first place each time,” coach Claire Power said.

The Panthers also won at Lawrence on Feb. 25. The Warren Cubs and Warren Whiskers placed third.

“Our Warren Panthers cheerleading squad has a ton of talent and we wanted it to shine so the rest of the state could see what they had to offer. We always want to do better the next season so we decided to amp up the routine this season with stunts that were a bit more advanced, especially at the PeeWee (elementary school age) level and increase our difficulty in tumbling skills while also increasing the amount of girls that could do it. We were big into using the “wow” factor so we could knock it out of the park. And I would say, this year, we definitely did it. So proud of all our cheerleaders and coaches. Our motto this year was …..”start unknown, finish unforgettable”….. And that we did.” said head coach Claire Power. 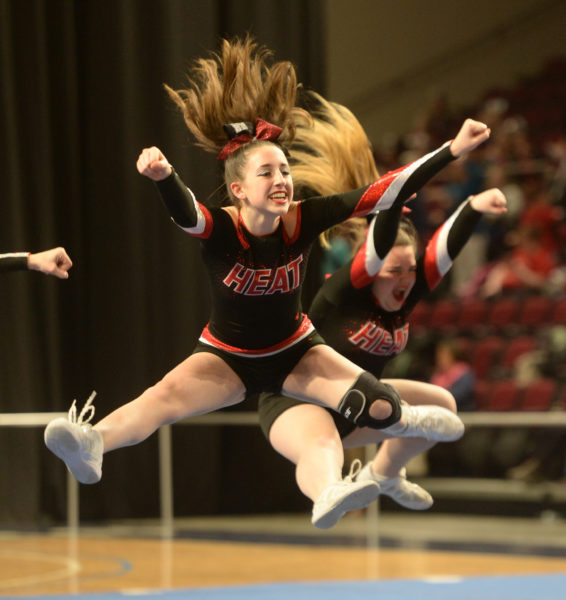 Wiscasset cheerleaders leap into the air during their performance in Bangor on Sunday. (Paula Roberts photo)

The Dolls K-2 division 2 was won by Tri Town Cheer.

The Cheer Magic Pixies took first in the Tiny All-star 5 & under division.

Junior All-Star winners in the 14 & under D1 were 1. Cheer Magic Illusion and 2. All-Star Sparkettes.

The Lamoine Lions won the Mixed K-5 division and the Woodland Dragons were second.

The Peninsula Bulldogs won the Mixed 3-8 D1 division and Ellsworth Falcons were second.