Waterville defeated Medomak Valley 35-34 in KVAC girls basketball action on Feb. 9, in Waldoboro. Medomak spotted Waterville the first 10 points of the ball game then played catch up for the remainder of the game. Trailing by 10 at the half, Medomak scored the first eight points of the third quarter to pull within two.  Waterville led by seven heading into the final quarter. Medomak tied the game twice in the fourth quarter, including with 1:08 to play. Both teams turned the ball over on their next two possessions. Dakodah Aldrich was sent to the line with eight seconds to play, and made one for the game winner. Medomak was unable to get a shot off on the other end. Waterville made 17 of 32 foul shots in the game, and Medomak made 6 of 15.

Medomak was led by Autumn Ripley with 9, Addison McCormick 8 and Alyssa Creamer 7. Waterville was led Aldrich and Gabriella Maines with 8 each and Keira Gilman 7. 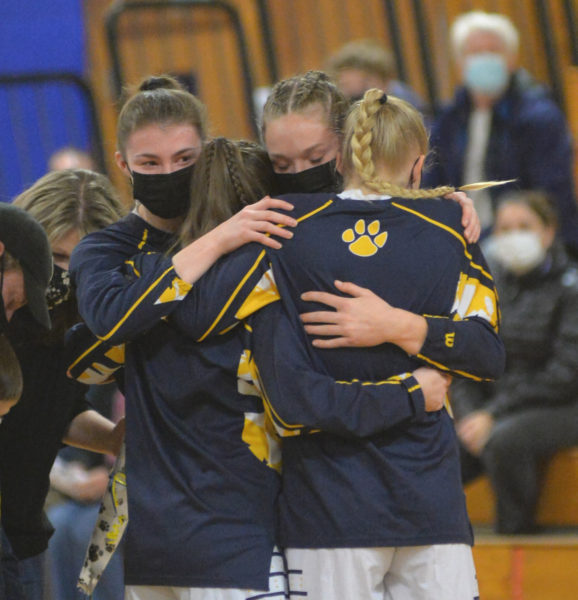 Medomak Valley seniors Autumn Ripley, Alyssa Creamer, Zaniah Puchalski, and Baylee Stewart hug after Creamer presented flowers to Paris Pierpont’s parents during senior night. Pierpont was killed in a car crash in 2021 and her uniform has been draped on an empty chair every game this season in her memory. (Paula Roberts photo) 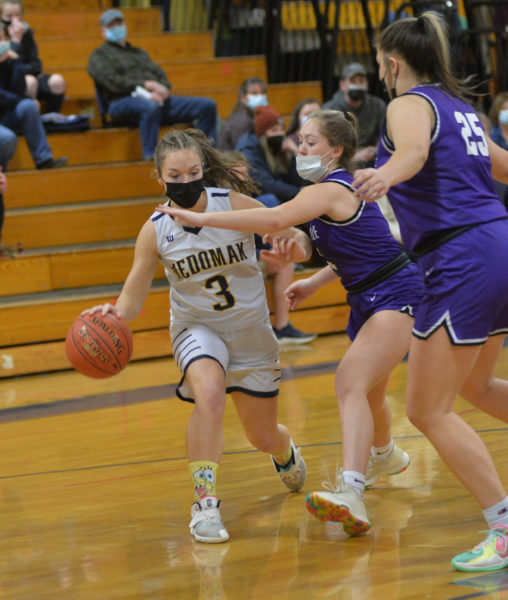 Alyssa Creamer looks to drive inside for the Panthers. (Paula Roberts photo)