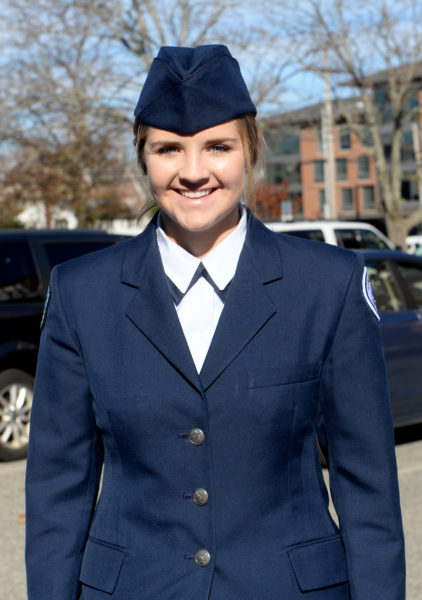 All her young life, Lindsey Gordon, of Alna, has wanted to fly. Not just go up in a plane, but to take the controls of a craft and soar into the heavens. This fall, the Wiscasset Middle High School senior joined the Air Force Junior Reserve Officers’ Training Corps with the Lewiston High School-based Maine 891st. The 891st is commanded by retired Lt. Col. Mark Welborn, of Wiscasset.

“I have always been interested in flying, either flying on my own or serving my country,” Gordon said. “Last year it hit me I wanted to fly and serve.”

“Lewiston just does Air Force. I got lucky, it was the closest one and it was Air Force,” Gordon said. There are 105 cadets in the Lewiston JROTC. The majority  are from Lewiston High School, but the 891st also draws cadets from  Edward Little, Oak Hill, Lisbon, Leavitt, Poland Regional, and Franklin.

“Lindsey is the only Lincoln County student we have in our JROTC program, and in fact, I believe she is the first,” Welborn said.

Gordon met Welborn through his daughter, Hannah, who is Lindsey’s older sister Kayla’s best friend. “He mentioned the program he taught in Lewiston. Last spring I started to do research” on JROTC, Gordon said. After doing the homework, she got permission from WMHS Principal Peg Armstrong to participate in the Lewiston JROTC program.

“Lindsey is an incredibly dedicated and enthusiastic member of our school community,” Armstrong said. “She is fully committed to all that she does. She is a strong student, athlete, and member of National Honor Society, student council, and student government.

“In order to participate in the JROTC program, she did all the work necessary to complete paperwork and work with the school counselor, Shaye Paradis, to make sure she had all the classes she needed for graduation in her schedule. I am happy that she is able to be part of the JROTC program in Lewiston.”

Gordon gets up at 5 a.m. every other school day and makes the drive to Lewiston to participate in the program. She then returns to Wiscasset for the remainder of the day to take classes.

Gordon said she joined JROTC because she “wants to be a pilot any way I can.” Her mother, Deanna, took her daughters on vacations where they flew to their destinations. “I love flying,” Gordon said. 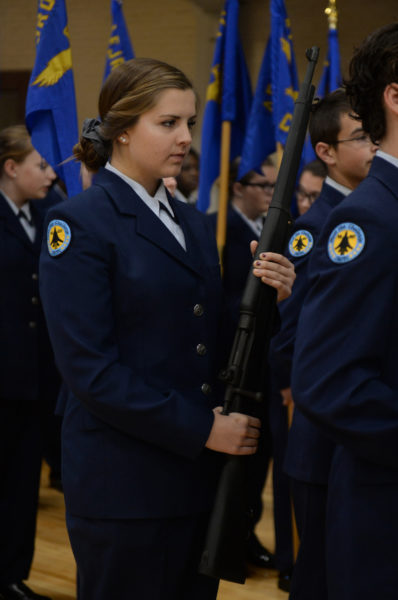 Lindsey Gordon, of Alna, participates in a Veterans Day program at the Lewiston Armory with the Maine 891 unit of the Air Force Junior Reserve Officers’ Training Corps. (Paula Roberts photo)

Gordon is a member of the Midcoast Maine Equestrian team, out of Stonewall Stables in Nobleboro. “Even riding is a few seconds of flying,” she said of soaring over jumps on horseback.

Her great-grandfather had a helicopter, and used to land in their backyard and take them on short trips. “That was definitely pretty cool,” Gordon said of getting the flying bug at a young age.

On Saturday, Gordon participated in the Maine 891st Pass in Review parade during a Veterans Day program at the Lewiston Armory.

Gordon said “every aspect” of JROTC has lived up to her expectations. “It is good to have a backbone in military regime and the kind of grit the military brings,” she said.

She said the program has changed her for the better. “I have a lot more respect for everyone else, especially those that served,” she said.

“It is fun and hard work. It is a big commitment. … It has opened my eyes a little bit to see what the military is like,” Gordon said.

She has applied to all four military academies, but is keeping her options open, since only 15 percent of applicants get accepted. Her fallback plan is to enlist in the National Guard after graduation and go to college, probably the University of Maine at Orono, and participate in ROTC there. “I hope to go active duty in either the Army or Air Force, either way I can fly. As long as I get up in the air,” an enthusiastic Gordon added.

Of joining up right after graduation, Gordon said she has been thinking of the sacrifice of time. “Honestly I have been thinking about that a lot, leaving friends for basic training in the summer. It will be definitely hard and a big commitment, but I think I am ready to take that,” she said.

The mission of the Air Force JROTC is to “develop citizens of character dedicated to serving their nation and community,” according to its website. Its purpose is to “instill in students the value of citizenship, service to the United States, personal responsibility, character, and a sense of accomplishment. To make the greatest positive impact in the lives of our cadets as possible. This is perfectly encapsulated in our motto: ‘Building Better Citizens for America.’”

“I definitely think the ROTC has helped me and opened my eyes to see what the military can do for me. We gain a lot of respect. Everything about it helps me. I love it,” Gordon said. 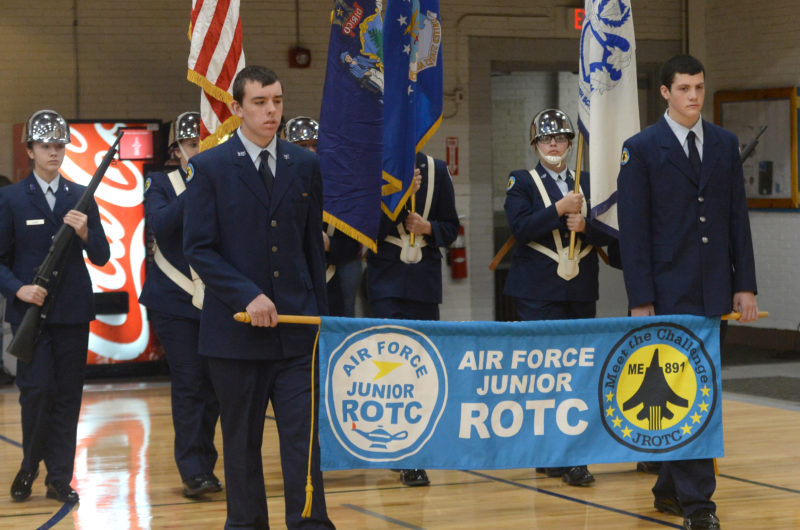