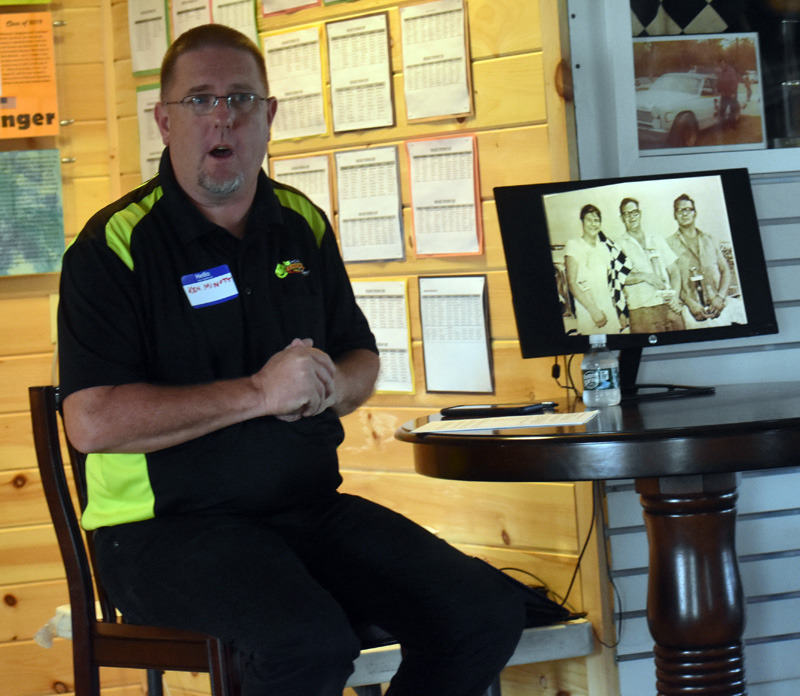 Ken Minott, announcer and promoter at Wiscasset Speedway, announces the induction of six new members of the track’s hall of fame during a luncheon at the speedway, Saturday, July 25. (Alexander Violo photo)

The Wiscasset Speedway Hall of Fame, now in its second year, inducted six new members during a luncheon at the track Saturday, July 25.

The class of 2020 includes a former staff member and five former drivers.

The staff member, Bill Cost, worked as an announcer and as the first promoter at the speedway during its early years. The drivers were Dave Darveau, Kenny Lund, Stan Meserve, the late Mike Moody, and Kenny Wright.

Cost, Darveau, Meserve, and Wright attended the ceremony. Lund could not attend due to illness. Moody was represented by his son, also named Mike Moody.

The six new members join the 13 inducted in 2019, the hall’s inaugural year. The track introduced the hall during its 50th anniversary season. Wiscasset entrepreneur Wilford Cronk built the track and opened it July 27, 1969.

“We are honoring people who had a significant and lasting impact on the success of the track,” said Ken Minott, the current announcer and promoter at Wiscasset Speedway.

The first inductee honored was Cost, described by Minott as an early fixture at the racetrack. Cost worked behind the scenes to ensure the success of the new venture, publicizing the track to drivers across the state and helping to bring them and their cars to Wiscasset.

“For 13 years it was my life and it was a great life. We did our best every day,” Cost said.

In addition to Cost’s work announcing and publicizing races, he published the track’s weekly program.

“There were only three ways to get in the program,” Cost said, “to finish first, second, or to get into a fight.”

The first driver inducted Saturday was Darveau, whom Minott described as one of the most successful drivers in Maine. Darveau won the first race he ever entered, at Unity Raceway in 1952, and proceeded to win 692 of the 1,200 races he ran on 20 tracks over a 40-year period.

Minott called Lund a pioneer of Wiscasset Speedway who won a number of races in the track’s hobby division while helping other drivers learn the ropes.

“At first it was called the novice division, but the name was changed because so many of the drivers were not novices,” Minott said.

Minott described Meserve as one of the state’s most accomplished and popular racers, who won the final race of his approximately 30-year career at Wiscasset Speedway, a 100-lap event in 1997.

Meserve built and tuned cars for many of his competitors and worked as an official for the ACT Tour and the NASCAR Busch North Series.

Wiscasset Speedway “was my favorite track and still is,” Meserve said. “This is a great place to race. With the high banks, you can race side by side and not get shoved off into a corner.”

Many fans and fellow drivers knew the late Mike Moody as the best “wheelman” of the late 1970s and early 1980s in Maine, according to Minott. Moody proudly drove Fords.

The younger Mike Moody has also raced at Wiscasset Speedway and said it has been inspiring to hear about his father’s success and the friendships he built at the track.

Wright started racing as a sophomore at Bath’s Morse High School in 1981, immediately showing a knack for the sport. He scored a number of victories before retiring from driving in 2004.

Wright said that although he does not drive anymore, he helps his son out at the track on race days. “He’s getting me back into it,” Wright said.

Last year, the induction ceremony was followed by a 50-lap race in honor of the track’s 50th birthday. “Every year we hold a birthday night on the Saturday closest to the date the track opened,” Minott said.

Due to COVID-19 concerns, there was no racing after this year’s ceremony.

The Wiscasset Speedway Hall of Fame is under the grandstands, next to the souvenir shop.

Richard and Vanessa Jordan have owned the track, at 274 West Alna Road, since 2012.

According to the track’s website, the first race of the season will take place at 6 p.m., Saturday, Aug. 1.

State rules for spectator sports allow tracks to open with limits on capacity. Wiscasset Speedway will allow a maximum of 200 fans inside, in four sections with 50 spectators each.