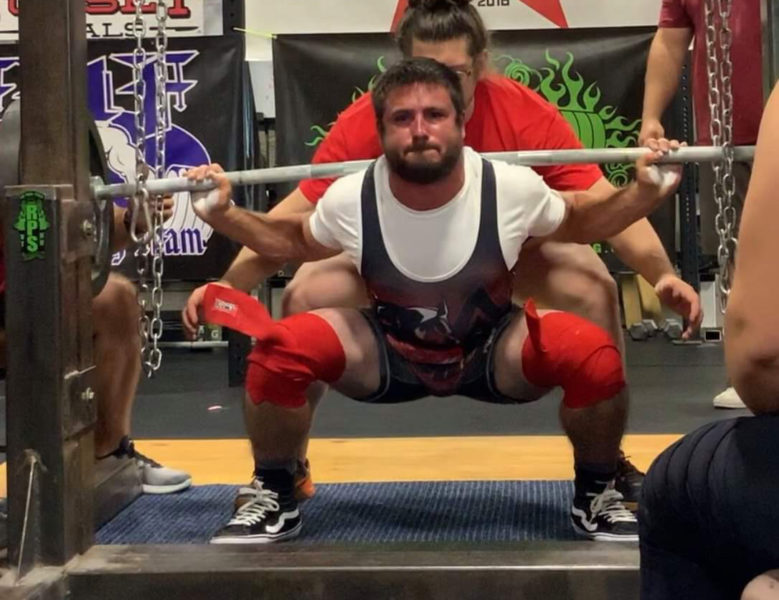 Mark Zaccadelli, of Bristol, competes in the squat at the 2019 RPS Maine State Powerlifting Championships at Beyond Strength in Falmouth. (Photo courtesy Natashia Zaccadelli)

Mark Zaccadelli, of Bristol, broke the Revolution Powerlifting Syndicate world record for the bench press in the open (any age) division, 165-pound weight class, Saturday, July 27 during the 2019 RPS Maine State Powerlifting Championships at Beyond Strength in Falmouth.

Zaccadelli set the record with a lift of 390 pounds.

He squatted 505 pounds and dead-lifted 505 pounds for a total of 1,400 pounds. He hit personal bests in all three events for a 70-pound improvement in his combined lifts. His highest mark before the competition was 1,330.

He has come a long way from the 73-pound freshman wrestler at Lincoln Academy that had to give up 30 pounds to some of his competitors in the 103-pound weight division.

Zaccadelli has been shattering powerlifting records since his first competition in 2016, where he broke four RAW American Powerlifting Federation records in the 123-pound weight class for juniors (age 19-23). He went on to break 11 records in that division.

Zaccadelli holds all the state and New England records in his weight class in three federations, including the RPS and USA Powerlifting.

He prepared for Saturday’s event with a special 16-week training regiment, but admits he “probably trained for only eight of the 16 weeks.”

“I was supposed to train for 16 weeks, but weightlifting does not pay the bills,” he said. “It was a lot of go with the flow, just try not to  overdo and over-train. You do what you can.”

Of breaking the world record, Zaccadelli said, “It kind of had to be done.”

Normally a record is not announced until after it is set, but before Zaccadelli bench-pressed the 390 pounds, it was announced that he was attempting a world record.

“She announced it before I made the lift, so I kind of had to do it,” he said. “You have so much adrenaline kicking in, it makes a difference.”

Zaccadelli has set a lofty goal for himself. He would like to break all the world records in his weight class in every federation with five sanctioned judges.

Having gone from a 73-pound weakling to a bulked-up, 155-pound man, it seems anything is possible for the Bristol native.