Hall-Dale handed Wiscasset softball a 7-2 loss on May 24 in the Wolverines final game of the season. Marino collected the win and August Moore the loss.

Wiscasset jumped out to a 1-0 lead in the top of the first inning when Maeve Blodgett walked, moved over on a Stephanie Jones single and scored on a Kelsey Jones single.

Hall-Dale scored two runs in the first, four in the second and one in the fourth.

Hitting for Wiscasset were S. Jones with a double and two singles, Sydnie Thayer and K. Jones two singles each, and Moore, Leah Potter and Corey Campbell a single each. Hitting for Hall-Dale were Bonefant with two and Begin and Drapeau with one each. 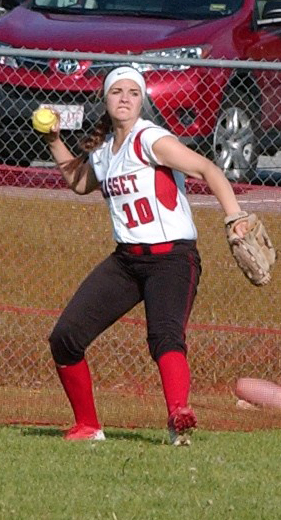 Sydnie Thayer holds onto the ball for the catch with a collision with Wiscasset teammate Maeve Blodgett. (Carrie Reynolds photo)