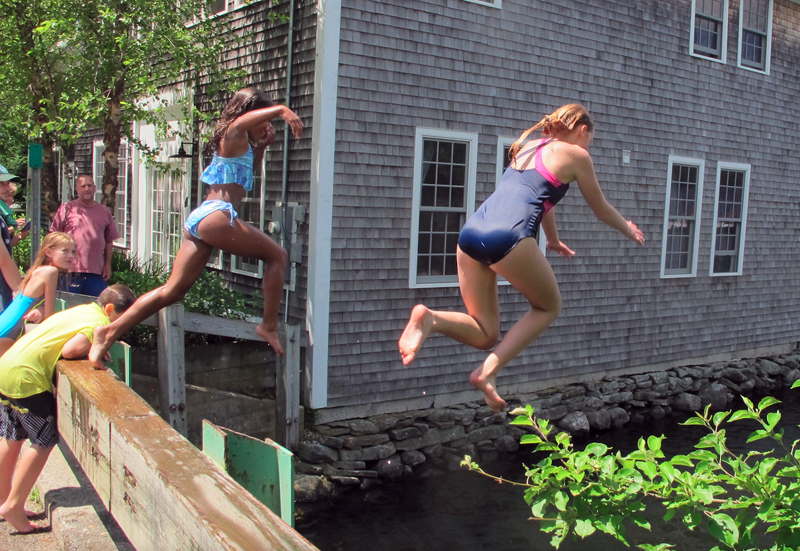 Grandkids in mid-air leaping off the bridge in the Mills.

The calendar doesn’t lie. It really is October, and it’s already starting to feel like autumn. Those cool and occasionally frosty nights are a harbinger of things to come. Summer in Maine is glorious. The days are warm, not hot, and we only experience the occasional stretch of uncomfortable humidity. It’s no wonder tourists flock to Midcoast Maine to enjoy summer with us.

In Damariscotta Mills, summer’s signature activity is the kids jumping off that old bridge into the warm waters of Damariscotta Lake. It never gets old: kids jumping and parents, grandparents, friends, and neighbors cheering them on. Sometimes you can even get a cool photo of grandkids leaping in mid-air.

With all the kids and all the traffic that summer brings, it’s time to say a big “thank you” to all the drivers who passed through the Mills. Thanks to you, there were no accidents and no one was injured (at least not to my knowledge). Thank you for slowing down. Thank you for staying alert and focused. It takes all of us to keep every one of those kids safe. You made it a great summer. 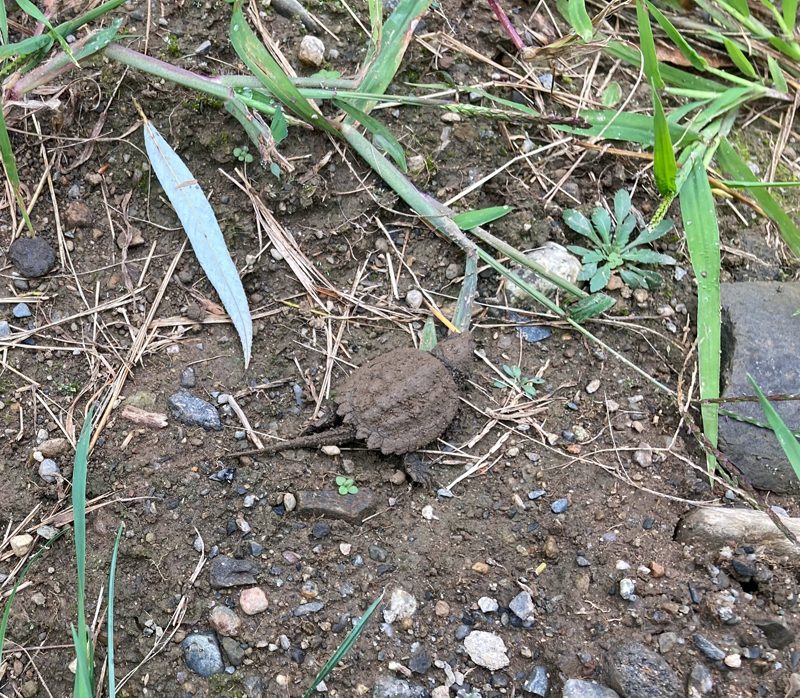 As summer began to fade around mid-September, the old bridge also played host to a usually unseen event: the birth of snapping turtles. These turtles were lucky. Our neighbors Jim and Mary spotted the mother turtle laying her eggs in a sand bank next to the bridge. When Momma Turtle was done and gone, Jim marked off the area with wooden stakes so that the nest would remain undisturbed. In September, eagle-eyed Mary spotted the tiny hatchlings as they left the nest and headed for the lake. The baby turtles were the color of sand, 2 inches wide, and perfectly camouflaged. They were practically invisible.

Thanks to Mary and Jim these new snapping turtles were off to a good start, and we were able to witness the beginning of their life journey.

So now autumn is upon us. As our daylight gradually slips away and is replaced by increasingly longer nights, these longer autumn nights are great for stargazing. In Maine our dark skies, thanks to few cities and their light pollution, are perfect for viewing the constellations, planets, and moon. These celestial bodies just pop out of that dark sky. And it’s even warm enough in early October to spend some quality time outside after the sun goes down.

So if you’d care to do a little stargazing this is the week to do it. Head outside in the early evening, particularly on Oct. 14, assuming it’s a cloudless night. You’ll also need a view of the southwestern sky where you’ll be treated to a marvelous show. The familiar moon will be flanked by two bright, star-like objects forming a visual triangle. With the moon in the center, above it and to the left is mighty Jupiter, and to the moon’s right is the ringed-giant Saturn. Because Jupiter and Saturn look like bright stars (unless you have a telescope), they are really difficult to identify when on their own. This celestial alignment makes it easier to identify them as our fellow planets. Jupiter, being larger and closer to us, is the brighter of the two.

Make a point of getting out there, enjoy our dark skies, hunt down this spectacular astronomical light show, and say hello to autumn in Maine.