A Jefferson man arrested after an April foot chase through woods in which a sheriff’s deputy was injured has been sentenced to a year in prison. 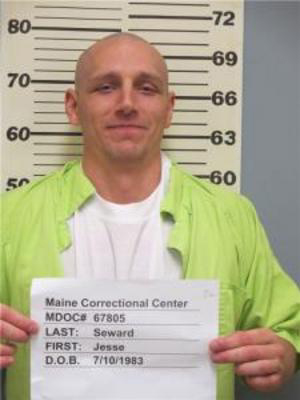 Seward was on probation for a 2011 burglary and theft case out of York County at the time of his arrest, and he also admitted to violating his probation.

Seward’s probation was revoked, and he will return to prison for a year for the probation violation. For domestic violence assault, he was sentenced to 364 days in custody, all suspended, plus two years of probation, which he will begin after his release.

His probation conditions require batterer’s intervention and treatment for substance abuse, and require him to submit to random searches and tests for drugs. The conditions also restrict contact with the victim of the domestic violence assault.

He was also sentenced to 72 hours in custody for refusing to submit to arrest.

Lincoln County Sheriff’s Office Sgt. Matthew Day responded to a report of a “possible domestic” on Village Street the evening of April 21, according to Day’s affidavit. Before he arrived, another caller reported that a man had left the residence on foot.

Day located the man in a driveway nearby, but the man fled, Day said in the affidavit. Day and Deputy Ken Hatch pursued the man down the road and into the woods, Day said.

During the chase, Hatch fell and injured his shoulder. He was out of work for some time due to the injury, and is now on administrative leave after being charged in an unrelated case.

Day caught up to Seward, and when Day was within range to fire his Taser, Seward stopped and Day placed him under arrest, according to the affidavit.

Later, Day and other deputies interviewed the woman involved, who said Seward pushed her to the ground and struck her in the ribs three times after becoming angry during an argument about smoking, according to the affidavit.

Seward is in custody at the Maine Correctional Center in Windham, according to the Maine Department of Corrections.

Seward was living in Jefferson at the time of his arrest, but listed an address in the York County town of Limerick in recent court documents.