Medomak Valley baseball rallied for three runs in the bottom of the sixth to beat Oceanside 5-2 on May 24 in the Panthers den. Ryan Creamer pitched five innings of shutout ball, and Brent Stewart closed out the final two innings. Logan Sheridan took the loss for Oceanside.

Medomak took a 2-0 lead in the fifth on four singles to Jordan Powell, Cam Robinson, Creamer and Isaac Eutsler. Oceanside knotted the score in the top of the sixth on an error, single to Titus Kaewphong and RBI single to Michael Norton.

Medomak came back with three runs in the home half of the sixth to win by three. Channing Soper singled (Wyatt Post pinch ran), Gabe Allaire walked and both scored on a Powell double. Powell came home on an Adam Eutsler sacrifice fly.

Medomak was led at the plate by Powell with a double and single, A. Eutsler and I. Eutsler two singles each, and Robinson, Stewart, Creamer and Soper a single each. Hitting for the Mariners were Norton and Colby Dorr with two each, and Kaewphong and Connor Harvey one each. 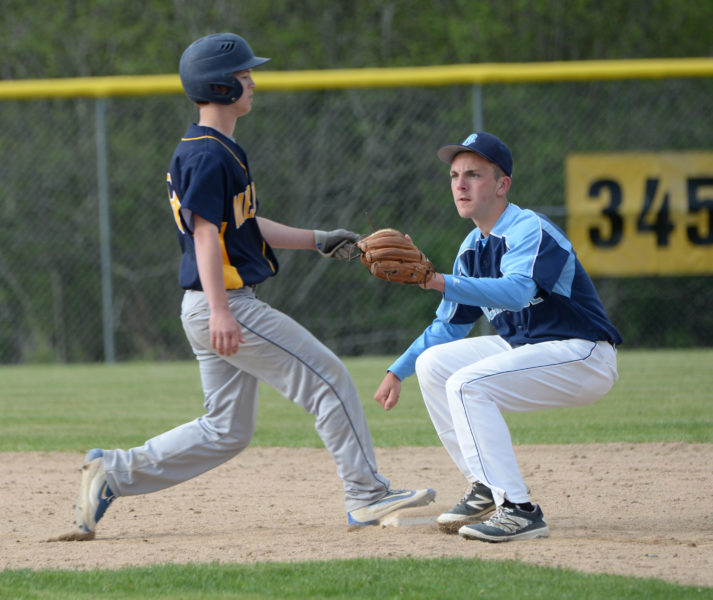 Jordan Powell is brushed back at second, after hitting a two run double in the sixth inning to drive in the winning runs. (Paula Roberts photo)