Medomak Valley boys basketball are quickly becoming known as the spoilers in North A tournament action at the Augusta Civic Center. The Panthers knocked off number three Skowhegan on Feb. 17, then rallied from behind to upset second seed Nokomis on Feb.21. That win earns them a berth in the North A Regional finals, to be played on Fri., Feb. 23 at 8:45 p.m.

Medomak got off to a slow start against Nokomis, trailing 12-8 at the quarter and 24-19 at the half. Nate Emerson cut the lead to two with a 3-pointer at the start of the third quarter. The Warriors  went on a 16-2 run , including sinking three straight threes to built a 16 point lead with under two minutes to play in the third period.

Panther coach Nick DePatsy took a gamble and went with a smaller, and younger team, and it paid off, as freshmen Brandon Starr and Ethan Reed, sophomore Gabe Allaire, and juniors Ryan Creamer and Chris Bowman rallied to win against all odds. 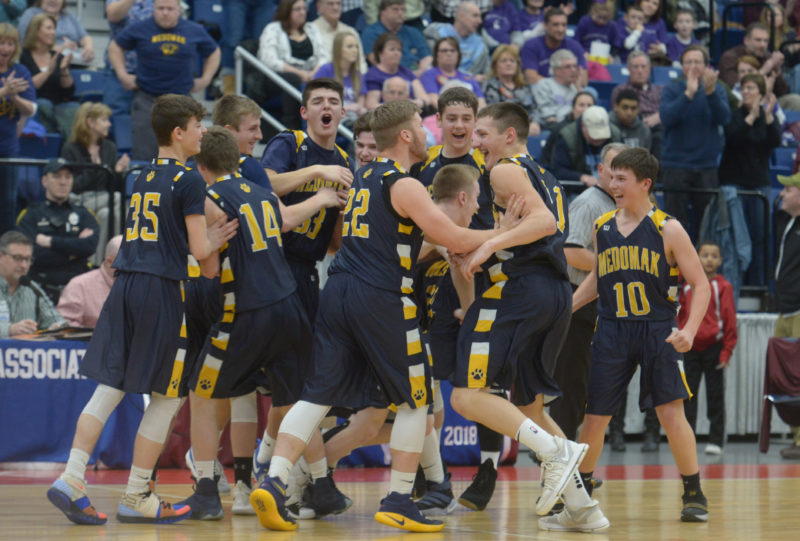 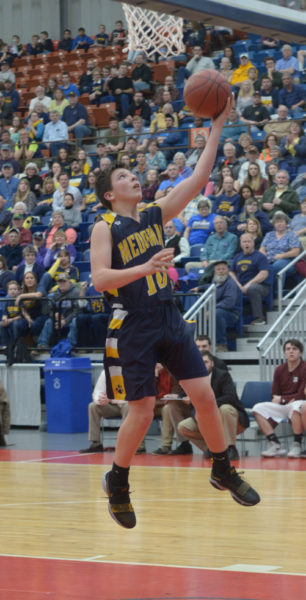 Ryan Creamer scores off his own steal in the second quarter. Creamer scored 15 points, including sinking six straight foul shots in the fourth quarter to lead the Panthers to a come from behind 49-44 win over Nokomis in the North A Regional semi-finals. (Paula Roberts photo)

The Panthers scored the final four points of the third frame to pull within 12, then rattled off 12 straight points at the beginning of the fourth to tie the game with 2:58 to go on two foul shots from Ryan Creamer. Brock Graves regained the lead for Nokomis. Panther Chris Bowman drove inside for two, then scored one at the line to put Medomak up by one with 1:16 to play. Creamer sank two at the line to put the Panthers up by three with 39 seconds left.  Graves cut the lead to one with 18 seconds to go, and Nokomis was forced to foul. Medomak made them pay when Gabe Allaire and Creamer sank two foul shots each in the final 15 seconds of play to seal the win.