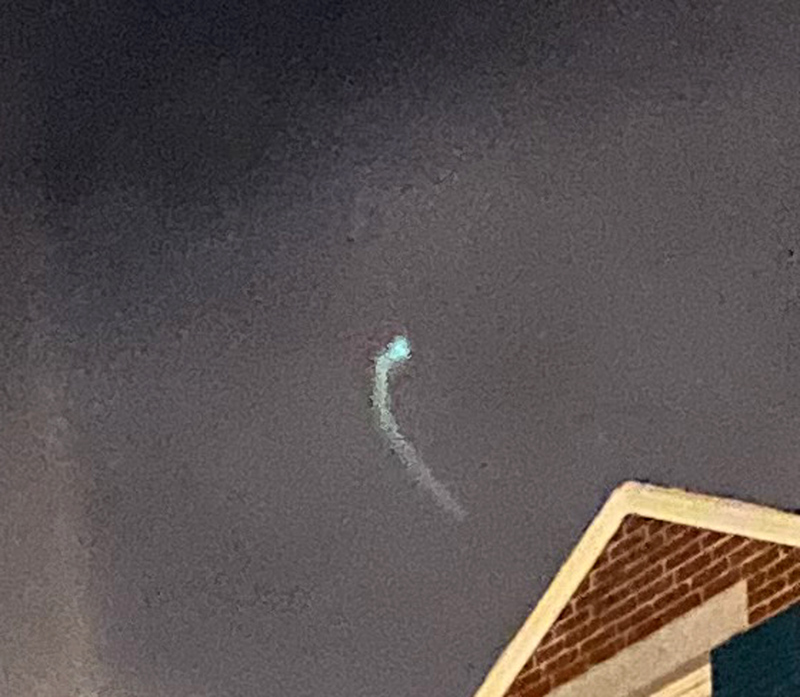 An unknown object was spotted by a guest on a Red Cloak haunted history tele-tour.

In a Halloween season coincidence, a guest taking photographs on a Red Cloak haunted history tele-tour in Freeport on Sept. 29 noticed an unusual and unexplainable object in the sky in one of her images. The object appeared to be at an altitude just above nearby rooftops, in motion, and leaving a curved trail behind it.

“This was the first picture that I took during the tour,” said the guest, identified as Isabel. She further explained that she didn’t see the object in the sky at the moment she took the photo, but rather a few minutes later when she checked the image on her iPhone 11. “It was a weird cloudy night, but I could not see any visual lights or movements with my naked eye.”

“The guest’s description and the camera information confirmed that the photo hadn’t been altered,” Latimer said. “That camera data also revealed that there was no flash in use and that the exposure time was relatively long, one-quarter of a second.”

According to Latimer, the fact that camera flash was not in use, “tends to eliminate the possibility that the camera-generated light may have picked up a small object like a flying insect near the camera, making it appear larger.”

It also eliminates the possibility that the camera flash illuminated the object. “It’s obviously dark outside, with the only light sources being street and walkway lamps, which don’t seem to be bright enough to illuminate the object,” Latimer said. “Further, based on the brightness this object displays in the image, it may be possible that the object itself was the light source.”

The fact that Isabel was only able to see the object on her camera is not usual, according to Latimer. “We have many guests sending in photos they have taken on the tours who discover something in their camera images they didn’t see with their eyes when they recorded the images,” Latimer said. “There are many theories regarding this phenomenon, none proven.”

According to Latimer, the most likely possibility with the image in question is that the object may have been radiating infrared light, which is unseen to the human eye, but recorded by many cameras. “That would explain why the object appears to be so bright, however, it is only a theory,” Latimer said.

“Here at Red Cloak Tours we label such images ‘anomalies,’ which are simply things we can’t explain. We like to say, ‘We don’t believe in ghosts, but we do believe in anomalies,’” Latimer said.

Isabel was a guest on a Red Cloak haunted history tele-tour, which were originally developed in response to safety concerns related to the pandemic. The tours are private, for groups or family members, with up to 10 guests. They are led by a Red Cloak tour guide live on a telephone conference call, which allows them to be highly personalized.

“This format allows guests to personalize their tour with subject matter and routing, and any questions can be easily answered while the walk is in progress,” said Sally Lobkowicz, owner of Red Cloak Tours. “They have become so popular we’ll continue to offer them even after the COVID-19 risk has subsided and we start offering standard tours again.”