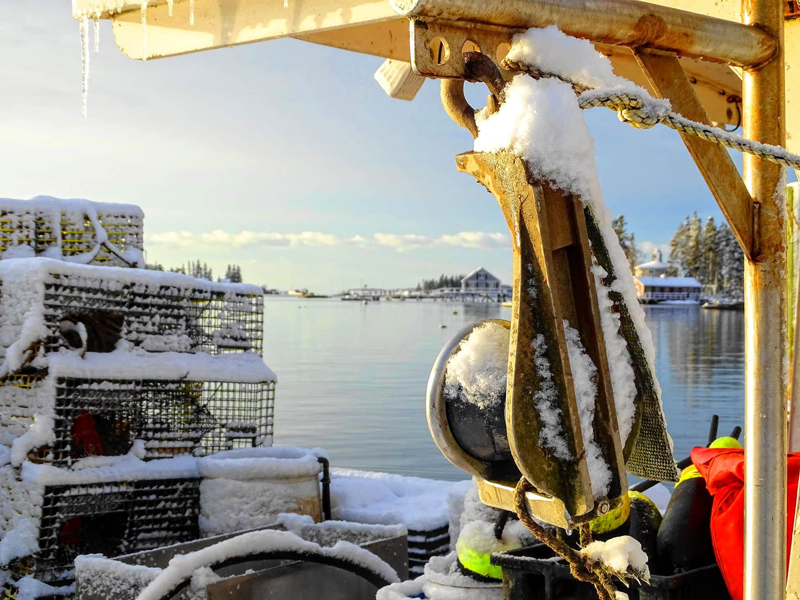 Dick Morrison, of Boothbay Harbor, received the most votes with his photo of a quiet harbor framed by snow-covered lobster gear to become the first monthly winner of the 2019 #LCNme365 photo contest. Morrison will receive a $50 gift certificate to Best Thai courtesy of O-Cha, of Damariscotta, the sponsor of the January contest.

After a close race, a Boothbay Harbor man won the January #LCNme365 photo contest by 11 votes with his photo of a quiet harbor framed by snow-covered lobster gear.

Dick Morrison snapped the photograph on the Boothbay Harbor town dock with his Google Pixel 3 phone early one December morning. Morrison was talking to someone on a boat when he noticed the scene.

“I really liked how it was all framed up, with the lobster traps and the horizon and the snow over everything,” said Morrison, who previously won the September 2018 #LCNme365 photo contest.

Morrison, who is colorblind, said he focuses on shapes, lighting, and the placement of objects in a photo. The Lincoln County News staff judge who selected Morrison’s photo as a weekly winner said it was “well-framed with a spot of color.”

In addition to having his photo featured on the front page of The Lincoln County News, Morrison will receive a $50 gift certificate to Best Thai, of Damariscotta, from January’s contest sponsor, O-Cha, also of Damariscotta.

As the first monthly winner, Morrison cannot win another weekly or monthly contest in 2019, but he can still submit photos for inclusion in the weekly slideshow of entries at lcnme.com.

Morrison’s photo will compete against the other 11 monthly winners at the end of the year as voters select the winner for 2019.

Submissions are now being accepted for the February #LCNme365 contest. The winner will receive a $50 gift certificate from the monthly sponsor, Rising Tide Co-op, of Damariscotta. For full rules and means of entry, go to lcnme.com/photo-contest.