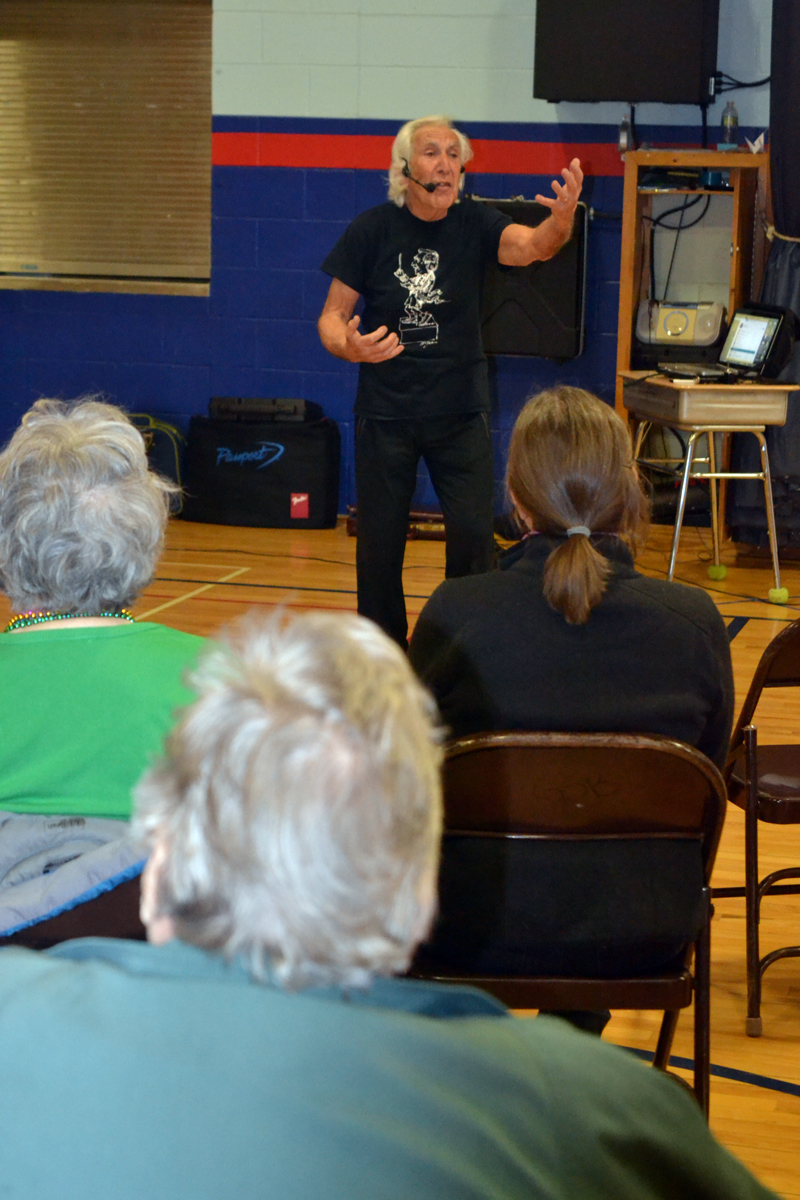 Get up, get moving: One of my readers, Carol Teel, who serves as artistic director for local senior song-and-dance troupe Hearts Ever Young, among other things, suggested I check out the Conductorcise event on Saturday morning, April 6 at Great Salt Bay Community School in Damariscotta.

As I had read in the event’s press release, David Dworkin, a former orchestra conductor (Philharmonic on the Hudson, Manhattan Symphony Orchestra, etc.) and a Juilliard graduate, would be leading the free workshop to demonstrate the Conductorcise program he invented.

As the Conductorcise website points out, “Conducting is a physical and spiritual experience, both athletic and aesthetic.” Dworkin’s program invites people of all ages and varying musical experience to take part in Conductorcise to relieve stress, create new brain cells, stimulate both sides of the brain, strengthen the heart, increase circulation, help control ADHD, build upper body strength, and have fun, among other benefits.

The session was sponsored by the Eldercare Network of Lincoln County, but people of all ages showed up.

What a blast! The 5-foot-2-inch Dworkin, who is in his mid-80s, is unbelievably fit and spry, a walking encyclopedia of classical music and music history, and a very funny, entertaining guy. Accompanied by various pieces of music, he led the enthusiastic group through the basics of conducting-as-exercise, moving his body (conducting involves more than just the arms, as Dworkin demonstrated) and providing interesting running commentary as he went.

Starting out with Edvard Grieg’s Peer Gynt Suite as a musical backdrop, Dworkin hit it on all fronts, teaching everyone in the room how to conduct, pointing out the health benefits of conducting (“helps build one’s immune system to face challenges,” releases endorphins), and enlightening attendees on the finer points of listening: “It’s more than just a melody. Listen for the conversations between instruments, first the flute, then the oboe – it’s very nasal, like the snake charmers.”

At a climactic point in the music, Dworkin threw his hands in the air and yelled out, “Whoa! I hope you felt what I felt – that’s better than prune juice in the morning!” 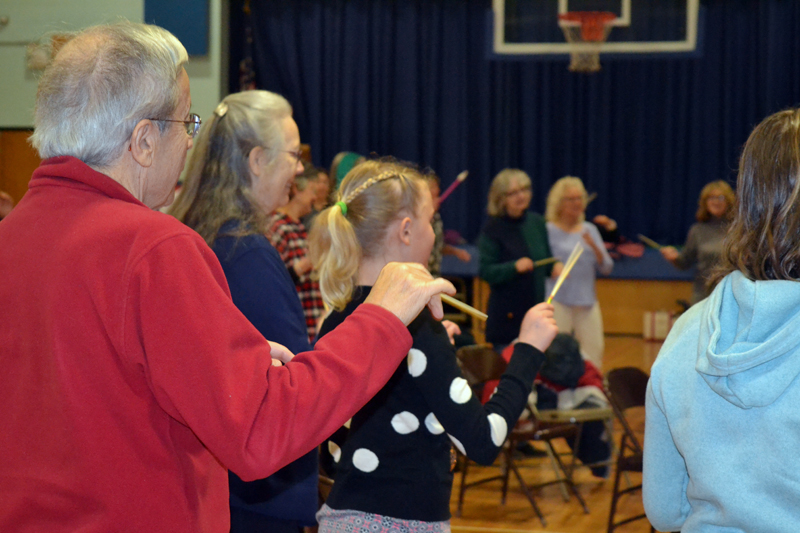 The movement involved in conducting is “good for bodies,” said Dworkin. “It gets the blood flowing, also to the brain.”

At one point, Dworkin checked in to confirm that everyone was having fun. “But the question is: are we exercising?” he said.

Of course, that answer was yes. Dworkin said that heart rates go up and blood pressure goes down after vigorous conducting to stimulating music. Endorphins are released, making one feel happy without the assistance of any substance. “That’s what music does, added to this motion we call exercise,” said Dworkin.

In addition to cracking the occasional funny joke, Dworkin kept his audience enthralled and amused when, later in his program, he imitated a dancing Lipizzaner stallion, using his baton as a tail as he alternately pranced in circles and conducted Johann Strauss Sr.’s “Radetzky March.”

Addressing the obvious pleasure in the room late in his program, Dworkin asked his involved audience, “Why are you smiling? Why do you feel better when you go for a brisk walk in the morning?”

The answer was clear: get up, get moving – and if you add music, all the more effective and fun! 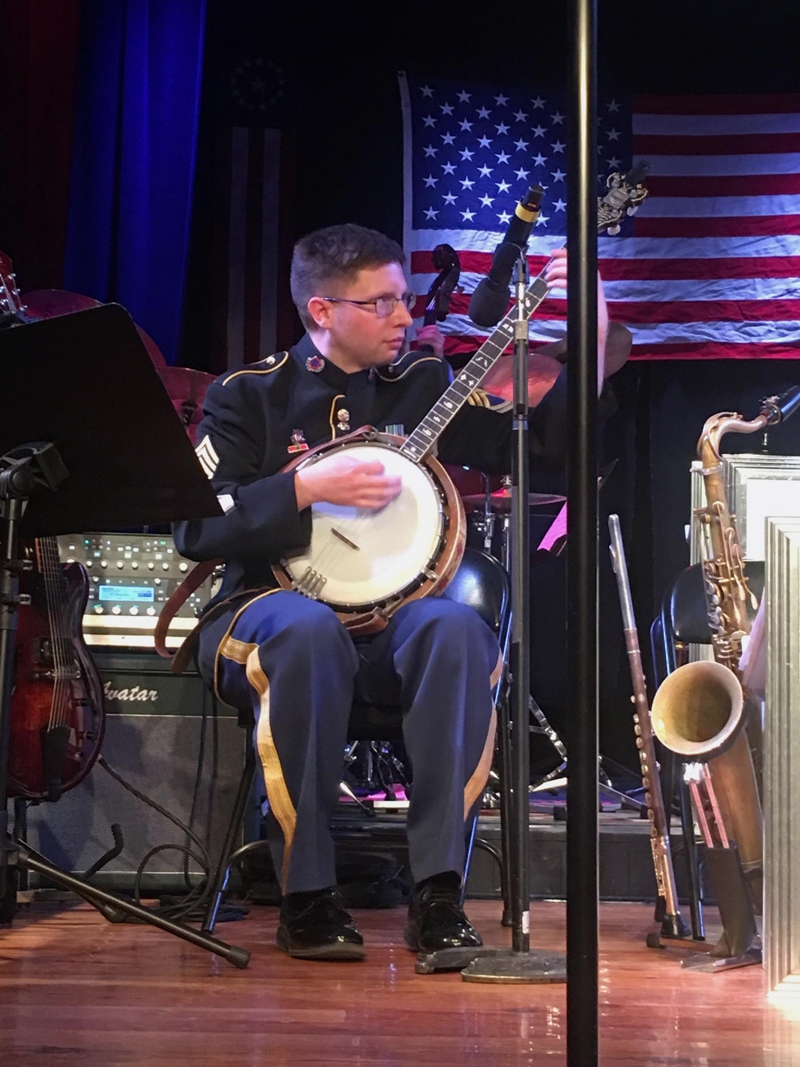 Jazz at the opera house: My lively Conductorcise experience followed a lively evening concert on Friday, April 5 at The Opera House at Boothbay Harbor featuring the U.S. Army Jazz Ambassadors, which I previewed in this column in late March.

It was 70 minutes of dancing-in-my-seat fun as the Jazz Ambassadors presented a top-notch program featuring highlights of the jazz genre over the past 100 years. Especially entertaining were soulful vocalist Sgt. 1st Class Randy Wight and the stellar instrumental soloists, including alto sax player Staff Sgt. Mercedes Beckman, who showed her stuff on the complex Mary Lou Williams tune “Knowledge.”

The opera house was packed and the audience understandably energized. I highly recommend one go see the Jazz Ambassadors when they return to the opera house next season. It’s a free concert; get your tickets early.