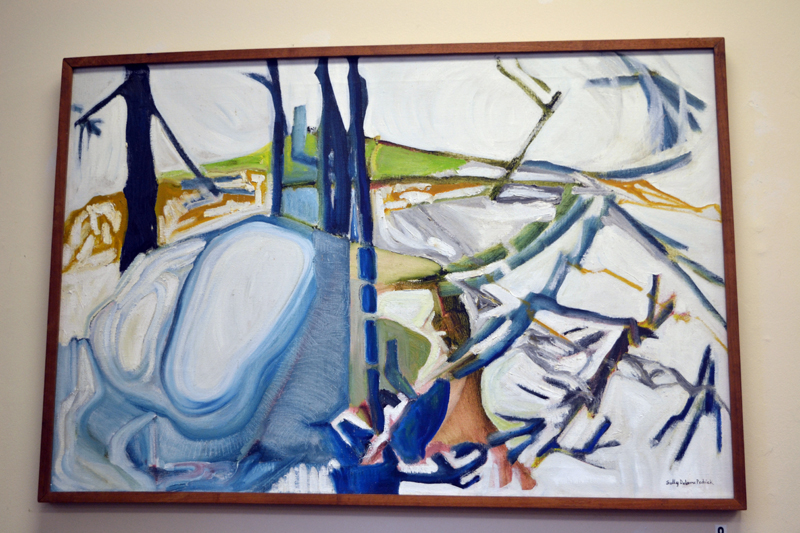 “Succession of the Forest: Pine-to-Oak After a Fire,” an oil painting on linen by Sally DeLorme Pedrick. (Christine LaPado-Breglia photo)

Art abounds in Lincoln County: As gallery season is about to really hit, it’s good to be reminded that in addition to the fabulous big visual-art venues in the area – for example, the four Bristol Road Galleries, Stable Gallery, and River Arts in Damariscotta, and Saltwater Artists Gallery and Pemaquid Art Gallery down the Bristol-Pemaquid peninsula – there are smaller, more unexpected places to view excellent art. The Bristol Area Library, located at 619 Old County Road in Pemaquid, is one such spot.

I have, for instance, seen the very fine paintings of Walpole artist Susan Bartlett Rice on exhibit at the cozy little library – in two separate shows.

Currently, through Friday, May 31, an exhibit titled “Fanes, Vanes, and Weather” is hanging on the walls of the Bristol Area Library. The show features the work of talented Round Pond (Bristol) artist Sally DeLorme Pedrick – her oil paintings and woodcuts. (Pedrick is also a glass blower.)

Pedrick helps us out with a brief glossary of “earliest weather indicators” that includes a definition of the word “fane.” “Fane” is a combination of the word “flag” and the word “vane,” as in “weathervane.” Flags on castles were the earliest indicators of weather. Weathervanes and fanes came later. Conveniently, there happens to be an actual fane hanging inside above the door of the Bristol Area Library. Check it out.

Pedrick’s modest show – four woodcuts and five paintings – is a delight, a sampler of sorts of her prolific output of work that can be seen at her home-studio shows (more on that in a bit). Her woodcut print “Steeple Fane” gives the viewer yet another glimpse at the design of a fane, something akin to an ornate metal arrow that moves according to the direction of the wind. 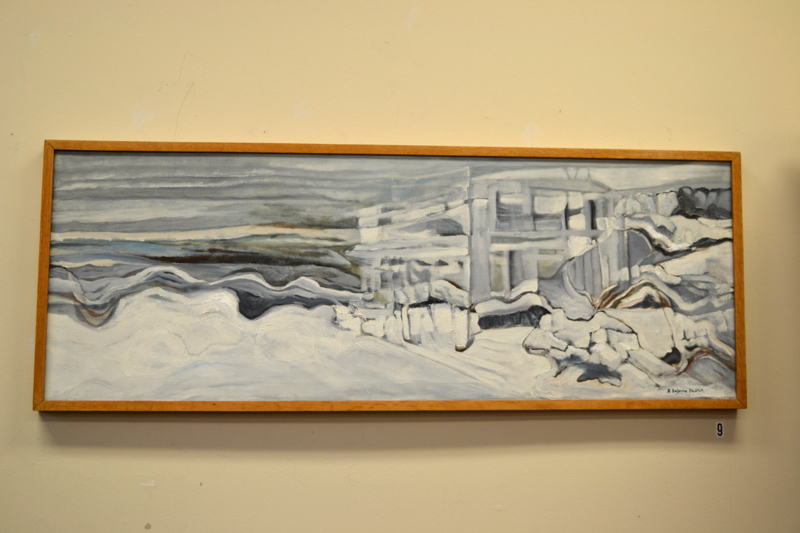 Pedrick’s oil-on-linen piece called “Remembrance of a Tidal Dwelling: Abandoned Farm – Between Seasons on the Damariscotta River,” painted in wintry grays and whites, is particularly effective when viewed from a slight distance. That’s when it appears less abstract, when the eye makes a more realistic-looking scene of it.

“Succession of the Forest: Pine-to-Oak After a Fire,” also oil on linen and also with a thought-provoking title, is another interesting piece to ponder. Are there tiny oak trees waiting to pop out beneath the abstracted burned-out pines?

The stick-figure-like trees in “Autumn Changes,” a painting in oranges and yellows hanging near the library’s front door, nicely echo the arrow-like shape of fanes, making this piece a nice one to include in the show.

“Fanes, Vanes, and Weather” is the first in Pedrick’s series of three weather-themed art shows this year. Shows two and three will take place in August (“Cold”) and December (“Hot”) at Pedrick’s home studio, The Library Art Studio, at 1467 Route 32, Round Pond.

Call Pedrick at 529-2345 for details about her upcoming shows. 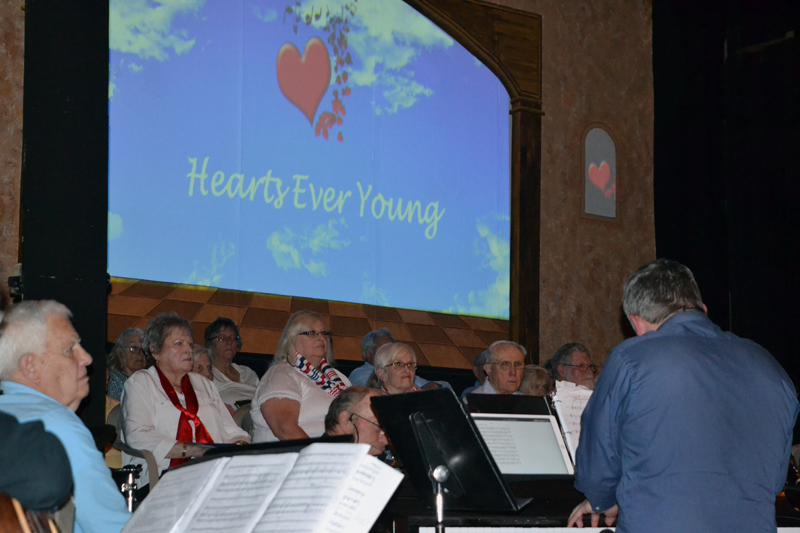 Hearts Ever Young musical director Sean Fleming (right, with back to camera) plays the piano and leads the band in the opening number of Hearts Ever Young’s packed matinee show on the afternoon of Monday, May 20. (Christine LaPado-Breglia photo)

One more chance: I slipped out of work on a busy Monday (May 20) and popped in on the opening number of Hearts Ever Young’s “A Decade of Razzle Dazzle” show at Lincoln Theater. The popular senior troupe of dancers and singers, led by music director Sean Fleming, was kicking off a three-show run – to a completely packed house.

I’ve written about Hearts Ever Young before. The troupe is super popular in these parts, offering everything from song-and-dance numbers, to comedy, to the popular “chair-tap,” this year featuring Lila Blechman, Melba Boynton, Dianne Davis, Viola Glendinning, Carolyn Gray, Ann Guild, Ann Harrison, Jeanne Hunter, and Wendy Wood performing a seated tap dance to the Hearts Ever Young chorus’s rendition of “Tea for Two.”

Producer and artistic director Carol Teel offered a few words after the two May 20 shows: “The talent and diversity of the group – with many a showstopper along with a variety of memorable songs, lively dances, and comedy from the past nine years – left the audience wanting more. What an inspiring and remarkable cast of individuals who know how to give a heartfelt performance!” 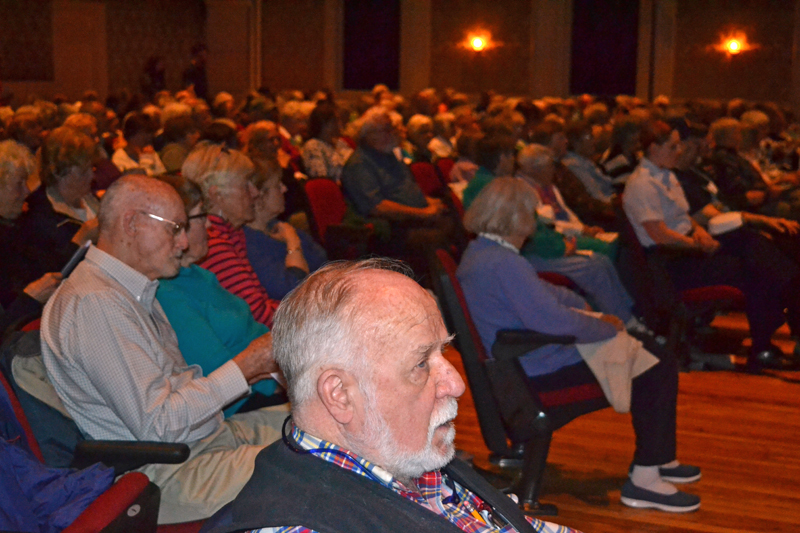 Hearts Ever Young’s first show of a three-show run of “A Decade of Razzle Dazzle” on the afternoon of Monday, May 20 fills the seats at Lincoln Theater. (Christine LaPado-Breglia photo)

Teel reminds us that there is one more chance to see “A Decade of Razzle Dazzle,” on Tuesday, May 28 at 6:30 p.m. at Lincoln Theater, located at 2 Theater St., Damariscotta. She also points out that troupe members will be part of Monday’s Memorial Day parade in Damariscotta. Call 563-3346 for more information.