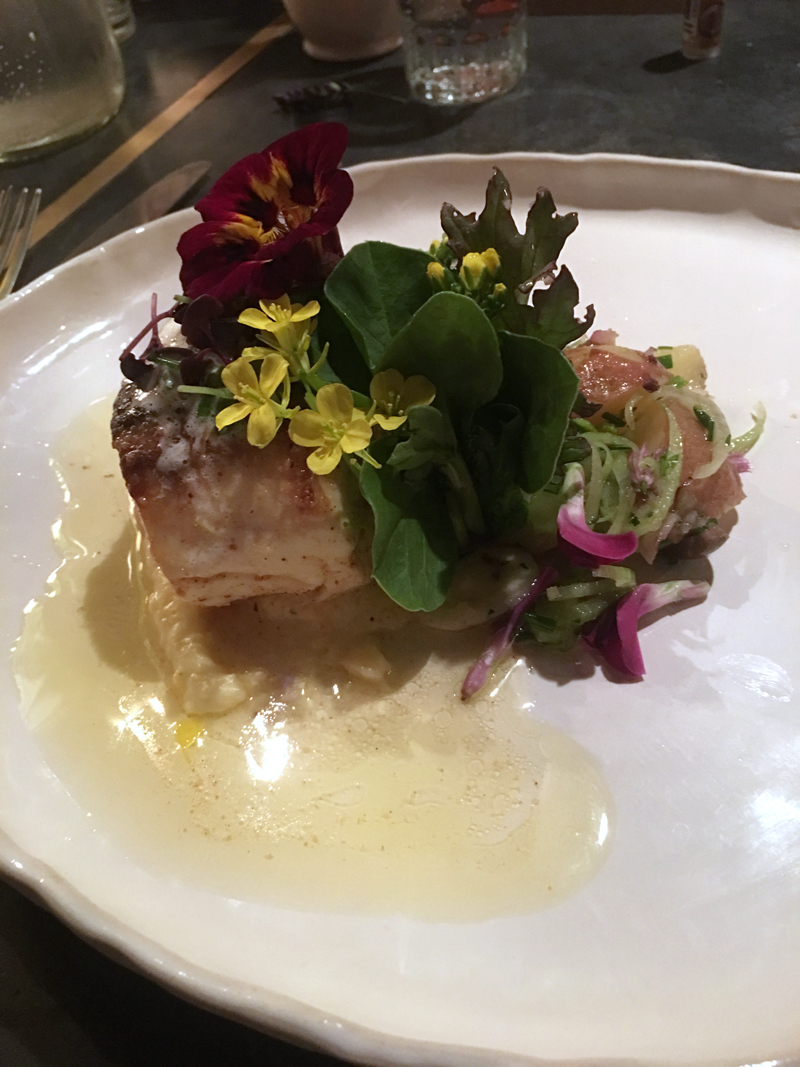 Maine halibut with lemon and chive blossom butter; creamy polenta; new potatoes; fennel, tarragon, and olives; and fava leaves and blossoms, one of numerous courses served at The Lost Kitchen in Freedom on the evening of June 20. (Christine LaPado-Breglia photo)

A concert of food: I had a wonderful two-week vacation recently, during which I had the extremely fortunate opportunity of having dinner on the evening of June 20 at The Lost Kitchen in Freedom with my son, Benjamin, who was visiting from Germany.

The Lost Kitchen, for those who may not be familiar with the venue, was made rather world-famous when it was written about in August 2017 in a New York Times article called “How Erin French Made a Tiny Maine Town a Dining Destination.”

A number of people asked me to share my experience there, so here goes.

There is not a single thing about having dinner at The Lost Kitchen that is not wonderfully unique and exciting. For starters, the only way one can get a chance to eat there during the restaurant’s annual season is by sending in a postcard during the first two weeks of April and having it chosen among many thousands of submissions (more than 20,000, I heard) sent in from around the world.

Calls were made to the lucky winners during the last two weeks of April.

The evening of June 20 was a very rainy one. After hustling in across a scenic narrow metal footbridge over rushing water, and being greeted by a lovely snapping turtle standing near a sign advising visitors not to pet her, we joined the 40 or so others in the wine cellar in the beautifully restored mill that is The Lost Kitchen.

Just before 6 p.m., beverages in hand, we all moseyed upstairs to take our designated seats, a number of people at the large communal table in the middle of the dining room. Benjamin and I got what had been described to me as “the best seats in the house,” the two seats at the flower-festooned counter looking onto the open kitchen where we could see all of the action – and the two seats that were always served first.

The multicourse prix fixe dinner began with a number of courses that weren’t even listed on the menu for that evening, starting with an appetizer tray (made of marble, by the way) that included a basket of crispy, buttery, grilled fresh bread on which to spread the several cheeses and butters we were given, such as the divine bone-marrow butter served attractively inside a hollow section of bone and the mound of soft goat-milk cheese filled with a pool of honey. Baby radishes tossed in cold salted water; tender, lightly pickled baby beets, each still sporting a tiny leaf; crisp, blanched roasted almonds shiny with a delicate coating of oil; and an assortment of tasty olives accompanied our first foray into the stellar goodness of The Lost Kitchen.

Our next course of four St. John River oysters artfully arranged on a bed of chilled rocks and green moss to resemble a beach scene was heavenly.

The oysters were followed by delightful ground-lamb sliders on fat little brioche buns, accompanied by goat cheese; julienned, pickled baby radish; and pea tendrils. The little napkin on which my burger sat playfully featured a wealth of information about black holes.

A “course” of two cool, wet cloths tied with twine and a sprig of fragrant lavender followed, and then a tiny palate cleanser – a little scoop of pink lilac-lemon sorbet in what looked like a small pale-green-glass egg cup in the shape of a pheasant – arrived in preparation for the actual menu items to follow.

Maine halibut was the main course. Drizzled with lemon-and-chive-blossom butter and accompanied by creamy polenta and new potatoes with fennel, tarragon, and olives, and fava leaves and blossoms, the fish dish was exquisite. I almost could not finish it as I was beginning to feel full, but it was just too delicious to waste a single bit. Thankfully, the slow, convivial pace of the dinner allowed for one course to settle before the next arrived.

Dessert was a candied ginger scone on a bed of rhubarb compote, vanilla bean custard, and fresh whipped cream, decorated with little pink edible flowers and a sage blossom, also edible. It was accompanied by robust, French-pressed dark-roast coffee.

Boothbay Harbor artist Marie Rose Ruffalo described her recent Lost Kitchen dining experience to me when I interviewed her for this column back in May as “a ballet of food” and noted how amazingly seamless was the experience of being served and having plates taken away. I agree with her estimation, but the description that came to my mind at one point in our unbelievably flawless and artistic dining experience was “a concert of food,” each perfectly timed movement unique and thoroughly satisfying – far and away the best dining experience I have ever had.

Every single aspect of my Lost Kitchen experience was unparalleled, from the cozy rainy evening, the excellent company, and the welcoming environment to the timing and beautiful presentation of each delectable course. And let me tell you, I have never eaten so many flowers in my entire life as I ate that night. It was a wonderfully heady experience.

Learn more about The Lost Kitchen at findthelostkitchen.com.