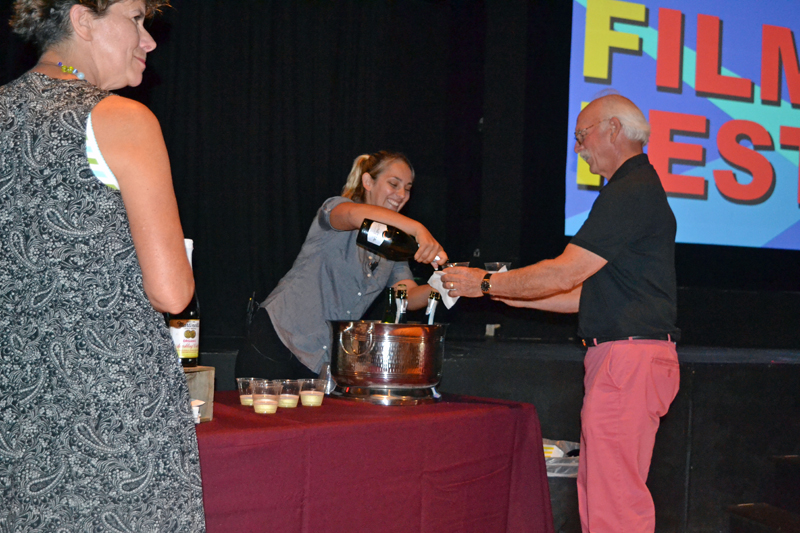 Laurel Gallione (center) serves an attendee at the opening-night reception of the inaugural MidCoast Film Fest on the evening of Friday, July 26. (Christine LaPado-Breglia photo)

Eagerly awaiting next year: I had the very good fortune of being able to attend the sold-out opening-night reception and screening of two films at the inaugural MidCoast Film Fest at Lincoln Theater in Damariscotta on the evening of Friday, July 26. I also checked out the three-day film festival’s Maine-focused short-film program on the afternoon of Sunday, July 28.

Wow! Next year, I need to go all three days to all the films if possible.

What MidCoast Film Fest co-founders Andrew Fenniman, who is also Lincoln Theater’s executive director, and Matt Smollon have managed to do is bring to the Midcoast area a decidedly top-notch film festival featuring compelling independent films from around the world and at home here in Maine.

What I saw on opening night (in addition to the delicious hors d’oeuvres passed around by Bristol’s Stone Cove Catering!) were two films: a very short, touching film – “Go, Go, Go!” – by filmmaker Jose Macerola about a beloved pack of sled dogs, and “Sea Change,” a feature-length movie filmed on eight GoPro cameras chronicling the arduous 6,689-mile rowboat journey of South Africans Riaan Manser and Vasti Geldenhuys from Morocco to New York City. The extensive editing alone just to produce the final result is utterly impressive – 8,000 hours of footage edited by 15 editors to come up with a film that runs an hour and 15 minutes.

And what a fantastic film! Its title, “Sea Change,” alludes to both the changing conditions of the Atlantic Ocean they were traversing and the changes that Manser and Geldenhuys went through as a couple. And the intimate conditions of filming two people on a rather small boat makes for some intense viewing. There were times when I felt as close as one might feel to actually being on that boat in what were sometimes rough seas.

The July 26 showing of “Sea Change,” by the way, was its Maine premiere.

The July 28 shorts program – which came in between the screening of what looked like an interesting film called “Dear Walmart,” in which Walmart workers share their stories, and two animal-themed films later in the day, “Flying Fur” and “Apex Survival” – was excellent. The short films ranged from “The Grey Zone,” which documents the land dispute between the U.S. and Canada over Machias Seal Island, to “The Maker,” an intriguing film about hardworking ceramic artist Dan Weaver, to the closing short, the entertaining “Jack,” written by and starring Damariscotta native Ryan Gaul, who appeared at a Q&A following the shorts program.

“We started the festival because we are always looking for new things to add to our programming which will not only keep the theater alive and vibrant, but will intrigue people who already enjoy Lincoln Theater and entice new folks to come,” said Fenniman post-festival. “We also wanted to find a way to contribute and augment the film scene here in Maine.” 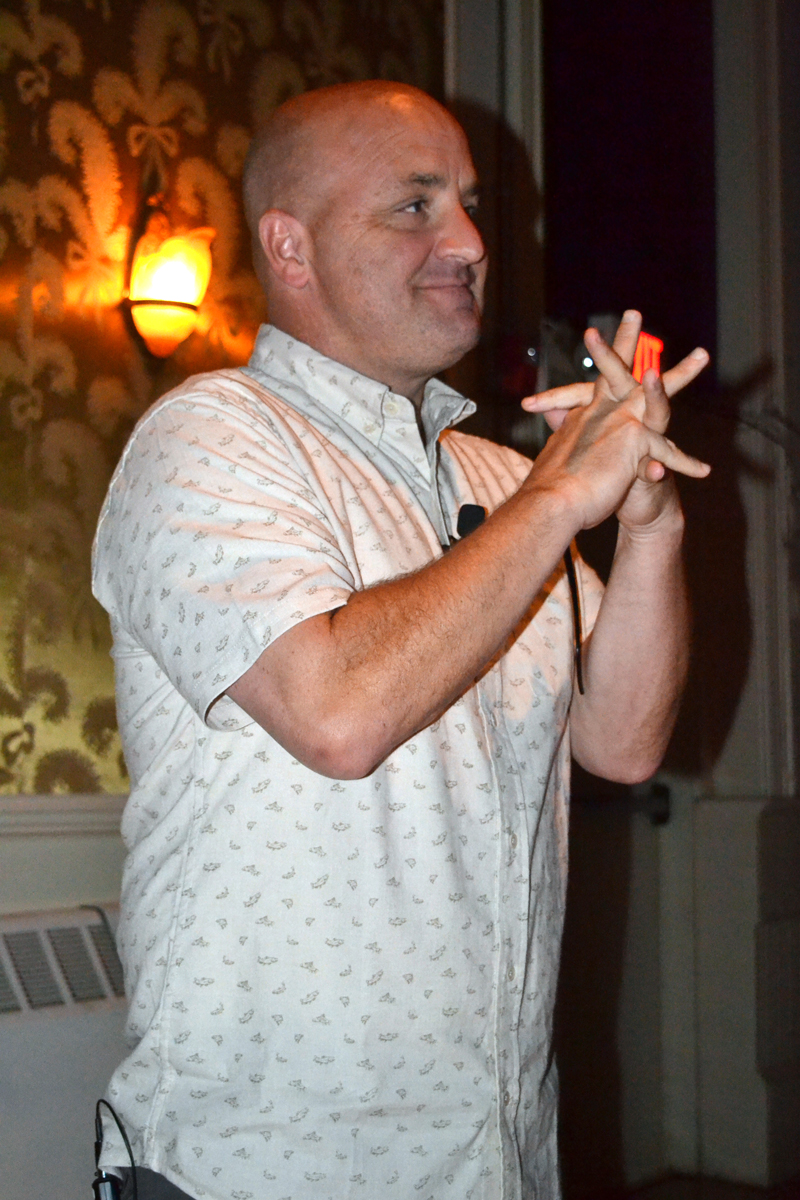 Fenniman said he and Smollon “chose a focus of ‘based on a true story,’ which opens up documentaries, biographies, historical fiction narratives, etc., because there is a keen interest in these areas across the Midcoast, having had a number of discussions with our local librarians. It also gives us a focus that no other film festival in the state has – which hopefully will enable us to build and grow an audience for a program that has a specific thread running through it.”

As for the future of the festival, Fenniman said, “I love the idea of keeping it small and manageable. We had a number of filmmakers join us this year and it would be nice to expand our conversations with them. All in all, I think the possibilities of growing the festival are endless. I also think we will rebrand as ‘Lincoln Theater’s MidCoast Film Fest’ as a way of clarifying and building both brands simultaneously.”

Fenniman shared a comment he received from two of the festival’s attendees: “Friday evening – the turnout was impressive, really impressive. I also want to say how much we appreciated participating in the inaugural film fest; between (us) we attended five films. The films we saw were compelling – all for different reasons – but intellectually rich nevertheless … Stay the course!”

Fenniman reflected upon the success of the festival. “I am very pleased with how the weekend went. The fact that four of the filmmakers joined in to talk about their films made it all the more interesting,” he said. “I don’t think I’ll forget the first full day when we showed ‘The Silent Soldier and the Portrait,’ the director’s loving take on her father who survived a torpedo hitting his ship toward the end of World War II. It turned out one of our audience members was stunned to see the film listed in the program, as her father survived the same tragedy. It turns out the two soldiers were in the same regiment and may actually have known each other! What a pleasure to introduce her to the filmmaker. The two of them are now corresponding.

“We had a number of young people, in particular, show up to enjoy the short comedy ‘Jack,’ starring Ryan Gaul, who graduated from Lincoln Academy in 1992 and based his film on a routine he developed for The Groundlings, a comedy club in LA. He turned to me after our Q&A and said he was just thrilled to see his film on the screen at the theater where he grew up and had so many great memories.

“For an event happening for the first time, after 14 months of planning, it was a thrill. Makes me even more excited as we develop the program for next year and Lincoln Theater’s second annual MidCoast Film Fest.”

As Fenniman put it, “This is Lincoln Theater’s baby.” And one that he should indeed be proud of.

Lincoln Theater is online at lcct.org.