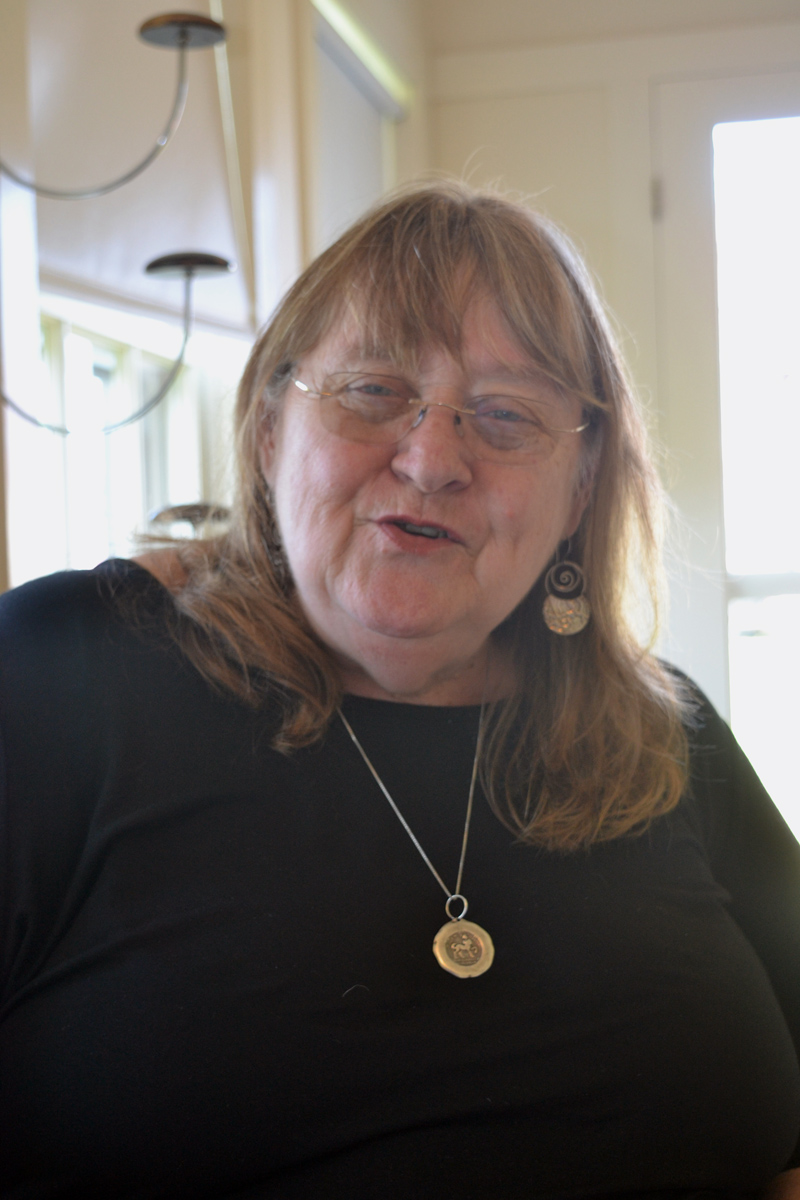 Monhegan artist Corlis Carroll, who specializes in the art of the painted photograph. (Christine LaPado-Breglia photo)

The revived art of the painted photograph: In early August, as readers know, I visited Monhegan to take in the wealth of art offerings on that lovely little island. I happily focused much of my time on the current exhibit at the Monhegan Museum of Art & History, “A Life Made in Art: Maud Briggs Knowlton,” which I reviewed for the LCN.

While at the museum, I had the pleasure of meeting and talking with Monhegan artist Corlis Carroll, who was the on-duty docent at the museum on the day I was there.

In addition to learning a lot about the exhibit and (amazingly) finding out that Carroll and I have a mutual friend in California, I found out from Carroll that she is also a painter of the black-and-white photograph – a seemingly lost art that Carroll is (thankfully) helping to revive.

A little history on the painted photograph from Carroll: “When (French inventor) Nicephore Niepce produced the first photograph in 1826, it was black-and-white. Early attempts at color photography began shortly after Niepce’s first photo, but it wasn’t until 1942 that Eastman Kodak, of Rochester, N.Y., invented Kodachrome film and color photography was achieved in the laboratory. In the years between 1826 and 1942, colored photographic images were achieved by applying oil and watercolor paints, tints, dyes, pastels, and crayons by hand. The process was practiced in every country where film cameras existed.”

Intrigued, I made an appointment to meet Carroll at her studio after her shift at the museum for a short chat and to see her work before I had to get back on the Hardy Boat for the mainland.

Carroll’s collection of painted versions of modern-day scenes is as nice as I had hoped. Her painted photo of one of the Monhegan Museum of Art & History buildings has a wonderful painting-like quality. Looking at it from a slight distance, one has a hard time deciding if it is a photograph or a painting. “John Sterling House – Monhegan” is another wonderful piece. In it, Carroll has chosen to subtly highlight the yellow of the large sunflower in the foreground and the pale-blue front door of the building. There is a satisfyingly strange quality to the light in the photograph, which Carroll plays upon with her paint choices.

I have kept in touch with Carroll since I met her, and recently asked her a lot of questions about her occupation:

Me: How did you get into painting photos?

CC: Eight years uninstructed with a camera, returned to school to study photography. (My) second class at the University at Albany was Alternative Methods for Making Photographs. This is where I met the painted photograph. 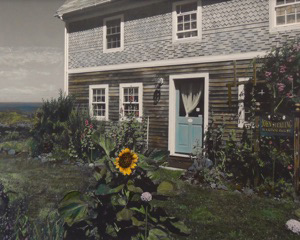 Me: How many people in Maine do this?

CC: I have no idea. I know this: Bridget Henisch, Penn State professor, wife of Heinz Henisch, photo professor at Penn State, told me that in 40 years of research, she had never met anyone who said, “I do the painted photograph.” I asked! Bridget and Heinz wrote the only body of academic work that was ever done on this medium that spanned the globe for over 100 years. 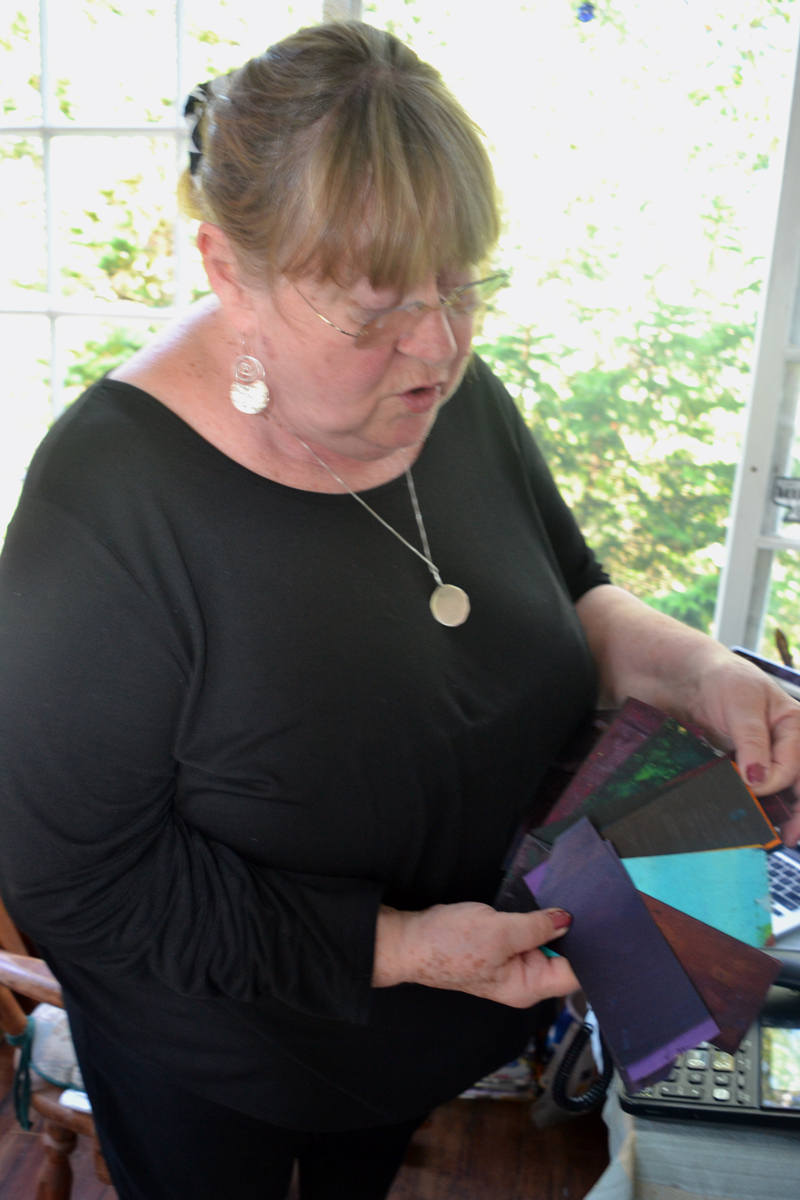 Corlis Carroll displays some of the pigments she uses to paint black-and-white photographs. (Christine LaPado-Breglia photo)

CC: Clearly, it isn’t lost anymore! I’m doing it! I found it in 1990 and never let go. … Essentially (though), it is a lost art. I know there are people out there doing it, but I have yet to meet anyone. I hear, “My grandmother used to do that” or “I have a wedding picture of my parents that was a painted photograph.”

Some portrait studios were still doing this in the ’60s, because my high school graduation photo was hand-tinted. Photoshop has a feature that allows one to produce a painted photo. However, that process is just not the same as dipping into pigment that was ground in the 1800s and applying it to a photograph.

I believe it was seen as “crafty,” and not “art” enough for the art world.

Wallace Nutting flooded the market with over 11 million images produced in 40 years and I believe that contributed to the devaluation of the medium. It was frequently done at kitchen tables by women. Frankly, it is unforgiving and very challenging.

Me: Do you have any role models?

CC: As regards role models, I am aware of a handful of individuals who did the painted photograph:

Me: What attracts you to the painted photograph?

CC: My attraction to the painted photograph is the palette. Of course, I love photography, but it is the soft palette that results from applying color by hand that is most exciting to me.

Learn more about Carroll’s art of the painted photograph at corliscarroll.com.