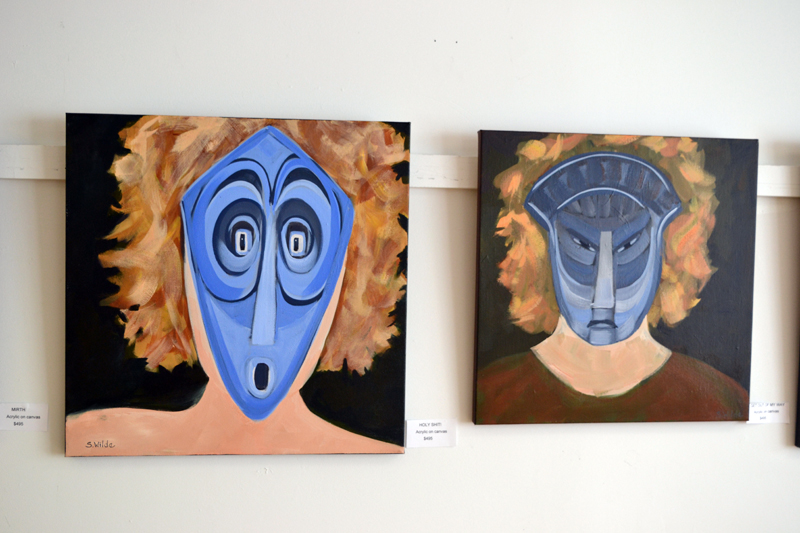 Two of the six paintings in Sarah Wilde’s masks series in the West Gallery of River Arts. (Christine LaPado-Breglia photo)

Wilde and scenic: There are two things that I find crucial to a good art-viewing experience (in addition to, of course, the presence of good art): adequate lighting and a quiet room. The current exhibit of paintings by Walpole artist Sarah Wilde in the West Gallery of River Arts in Damariscotta, “On the Wilde Side,” hits it on both counts – well, all three, if one counts the fact that Wilde’s art is very good.

I love the little West Gallery. It is well-lit, thanks in part to beautiful natural light streaming in the window, and it is always peaceful, a great place to spend time pondering works of art. There are even a couple of chairs handy in case one wants to sit for a bit and just gaze and think.

And the art exhibits that have been housed there recently, such as Wilde’s and Michael Blaze Petan’s fantastic “My Neck of the Woods” show earlier this summer, are notably top-notch and thought-provoking. 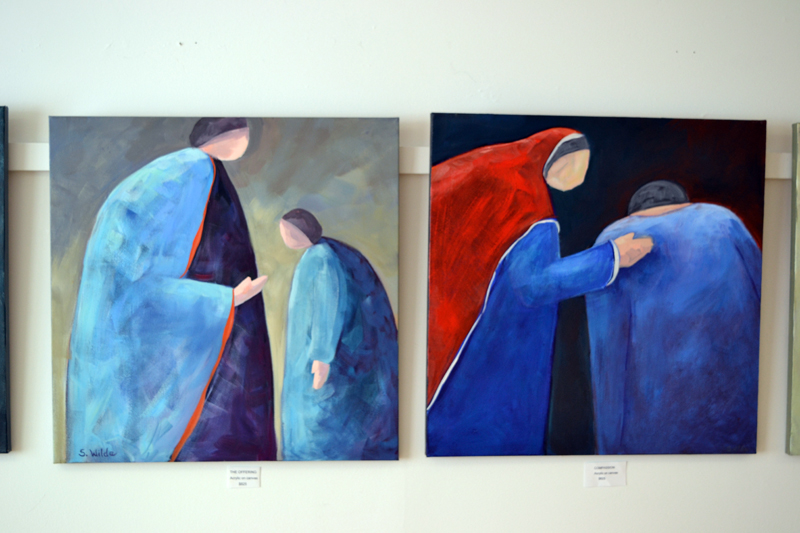 Wilde’s show is populated with a range of pieces – from paintings of people wearing expressive masks to intriguing pieces featuring only stacked boulders to paintings depicting pairs of faceless people interacting with one another. Wilde’s abstract landscape paintings – and this show offers quite a few – are notable for their majestic, jagged rocky vistas that evoke a feeling of quiet awe.

In Wilde’s accompanying artist statement, she writes, “Giving myself permission this fall and winter to paint abstractly and more from my ‘gut,’ I found forms emerging that had to be painted. At first, I concentrated on nonrepresentational (abstract) work and boulders kept emerging out of abstract shapes. Then, out of boulders, figures started to form, putting themselves into ‘being.’ I began to see the figurative work representing aspects of the human dilemma and the mysterious ways life affects us.” 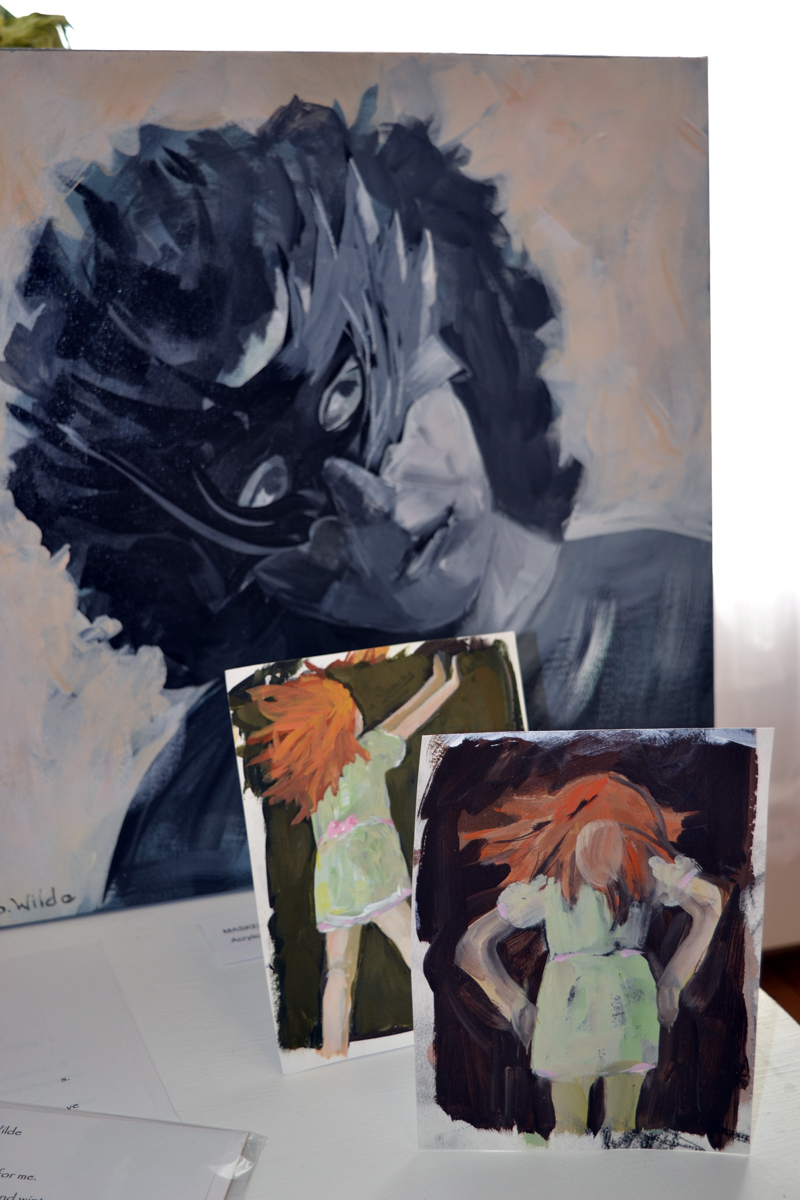 Wilde has a particular talent for portraying emotion and motion in featureless figures and inanimate objects such as boulders and moons. Her piece called “Compassion,” a large acrylic painting on canvas, features two human figures, both without facial features. The figure on the left, a nun-like person robed in red and blue, has a comforting hand on the back of the other figure, whose head is bowed seemingly in disappointment or depression. The viewer can feel the depth of emotion in this piece from both figures despite there being no facial features to convey emotions.

A grouping of six paintings on one wall features people viewed from behind their heads as they look up into the night sky, most of them at a curiously egg-shaped moon. These paintings have the magical quality of children’s book illustrations, inviting the viewer to ponder the mysterious scene with childlike curiosity and imagination. A seventh similar painting is featured on a corner table. It, like the mask painting next to it, is untitled, and both are part of an ongoing contest for exhibit-goers to choose a title and win some Wilde swag, such as a mask-series T-shirt and a landscape mug.

Another table featuring two gray-tone paintings of masked women also offers four small paintings backed with makeshift paper stands depicting a carefree young redheaded girl in a pale green dress in various unself-conscious poses. These little paintings, while appearing to be almost afterthoughts based on their presentation, actually offer a wealth of depth and joy to the viewer. I would love to see greeting cards made of them. I, for one, would buy them.