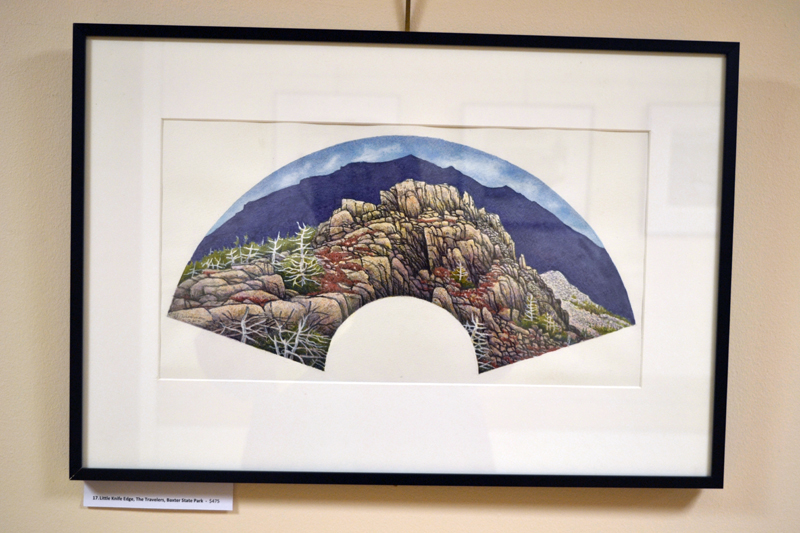 Luoma landscapes: I braved the latest round of snow to head over to the Hall Gallery at LincolnHealth’s Miles Campus in Damariscotta to see Alna artist Jon Luoma’s new exhibit “Landscape Watercolors of Maine, Newfoundland, the Galapagos, and Beyond.”

Luoma fans will likely recall his show at Savory Maine Dining & Provisions in fall 2016, “Landscapes of Maine, Newfoundland, and Nepal.”

As his exhibit titles suggest, Luoma paints landscapes, more often than not of beautiful, wild areas in Maine, such as Baxter State Park in the north-central part of the state. 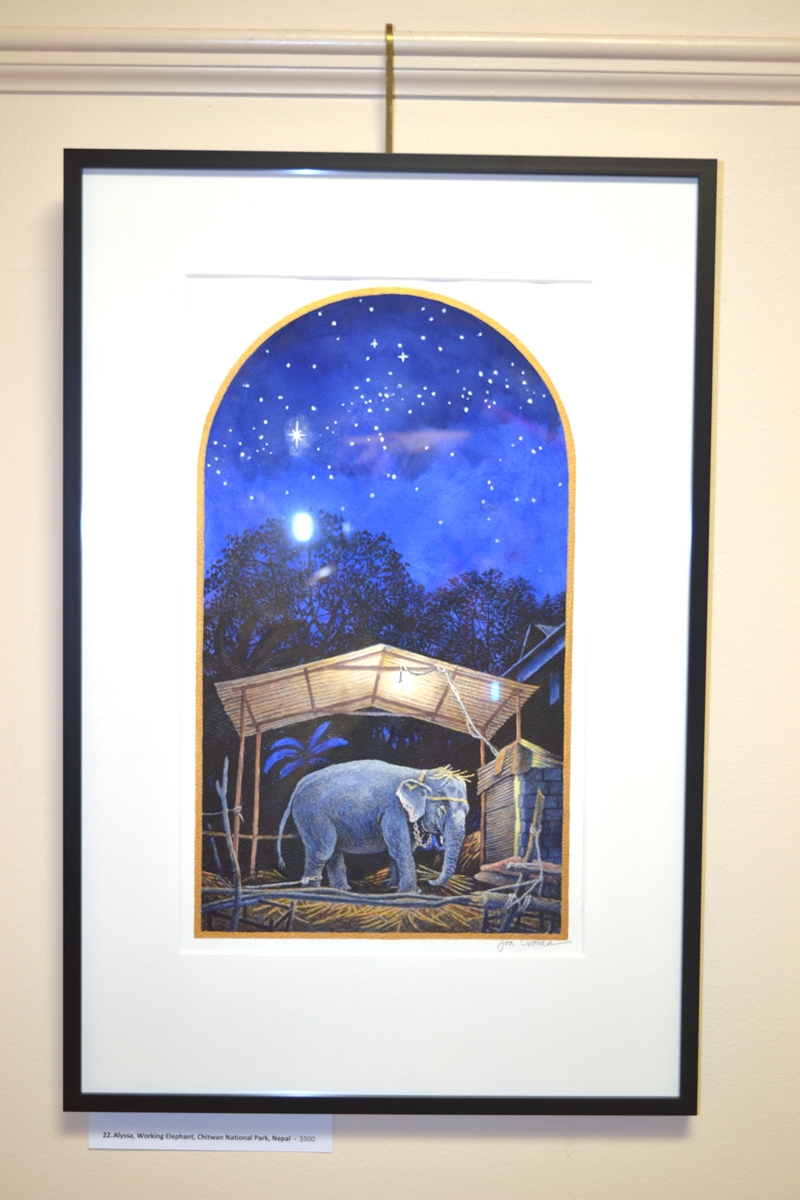 What the titles leave out, however, is that the impressive nature of Luoma’s watercolors are reliant in part on his use of Chinese inks to boldly delineate such things as outlines of and crevices in rocks. As his artist statement points out, Luoma studied traditional Chinese ink painting in Sichuan, China in 2006.

In the Miles show, Luoma offers numerous pieces – such as “Pine and Rock, Debsconeag Lakes” and “Little Knife Edge, The Travelers, Baxter State Park” – that nicely showcase his Asian-influenced technique. Some, like “Downeast Granite Shore,” are signed with Luoma’s “chop” – his stamped signature in Chinese – in addition to his usual signature.

Luoma’s skill with painting wildlife is refreshing. “Boreal Goshawk” is particularly beautiful, with the delicate snow pictured falling in this piece giving it a decidedly Asian feel.

There are a few paintings in the show that depart from a theme largely focused on rocky wilderness areas. One of these is “Alyssa, Working Elephant, Chitwan National Park, Nepal,” which pictures a chained elephant standing inside a small wooden shelter that conjures up, along with the blue starry-night sky pictured, images of the birth of Jesus. Framed with an arch, “Alyssa” reminds one of a Christmas card, but the plight of the elephant stands out as being something to feel sad about, unlike the birth of Jesus. It’s a thought-provoking piece.

And it’s fair to say that Luoma’s colorful “Common Ground” looks unlike any other painting in the show, so much so that, except for the obvious skill in drawing animals – in this case, sheep – one might not guess it’s a Luoma piece. Check it out.

Busting out of winter: “Had enough of winter? Want to break out of the cold and snow? Here are four opportunities to let loose.” Those were the enticing, all-too-relatable words with which South Bristol artist Joy Vaughan started out a recent email to me about upcoming workshops she is facilitating. 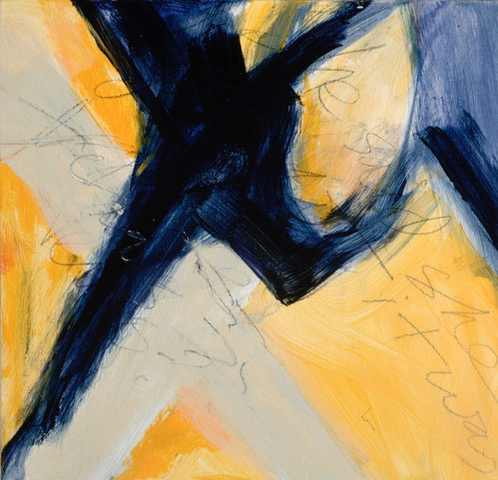 One can participate in one or more sessions of “Off the Edges and Outside the Lines,” a workshop “for people who want time to explore imagery using art materials, increase their intuitive faculties, and try out ideas on paper without facing criticism or judgment,” as Vaughan put it.

Workshops will take place at Vaughan’s Starfire Studio in South Bristol from 10 a.m. to 2 p.m. on Friday, March 30; Saturday, March 31; Friday, April 6; and Saturday, April 7. The cost is $65 per session and one should bring a lunch.

“Art-phobic individuals are encouraged to attend,” Vaughan said. Email her at joy@tidewater.net to sign up.

Vaughan’s studio is online at joyvaughan.com.