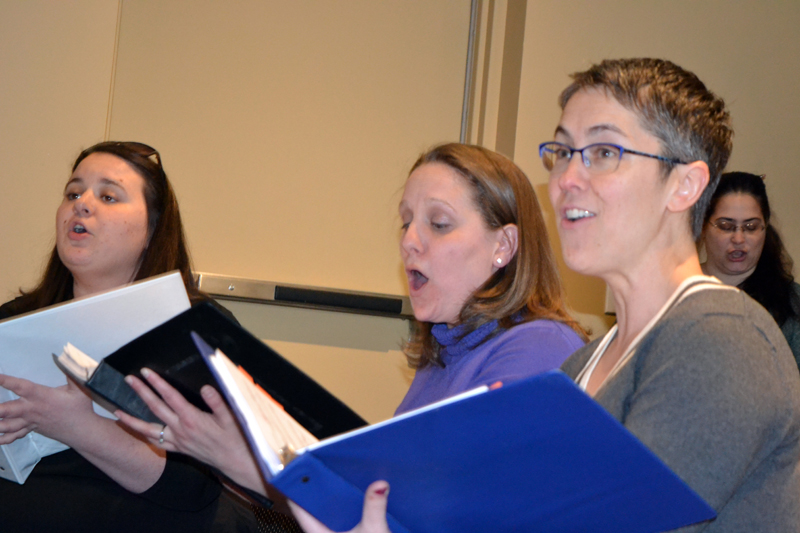 From left: Emily Mirabile, Kristen Robinson, and Victoria Hamilton, who play Judy Bernley, Doralee Rhodes, and Violet Newstead, respectively, in the Lincoln County Community Theater production of “9 to 5: The Musical,” sing at a rehearsal Sunday, March 25. Chorus member Barbara Belknap is in the background at right. (Christine LaPado-Breglia photo)

Just about everyone can relate to the lyrics of the anthemic theme song from the popular 1980 movie “9 to 5”: “Workin’ 9 to 5, what a way to make a livin’/ Barely gettin’ by, it’s all takin’ and no givin’/ They just use your mind and they never give you credit/It’s enough to drive you crazy if you let it.”

Belted out with just the right amount of punchy twang by seasoned local actor Kristen Robinson, who plays secretary Doralee Rhodes in the upcoming Lincoln County Community Theater production of “9 to 5: The Musical,” the lyrics take on a vibrant, infectious life, especially when backed up by the lively 27-piece chorus dubbed The Double-D Singers.

Robinson, who plays the feisty character so famously portrayed by country music star Dolly Parton in the 1980 comedy film of the same name, was rehearsing with the “9 to 5” cast on the afternoon of Sunday, March 25. Emily Mirabile and Victoria Hamilton, who played the title role in LCCT’s 2017 production of “Mary Poppins,” were there as well, rounding out the trio of female leads as Judy Bernly and Violet Newstead, respectively.

Other local theater staples in the sizable cast include John Henry Eddyblouin as Josh, Joe Lugosch in the dual role of Duane and Joe, and Zora Margolis as Margaret. 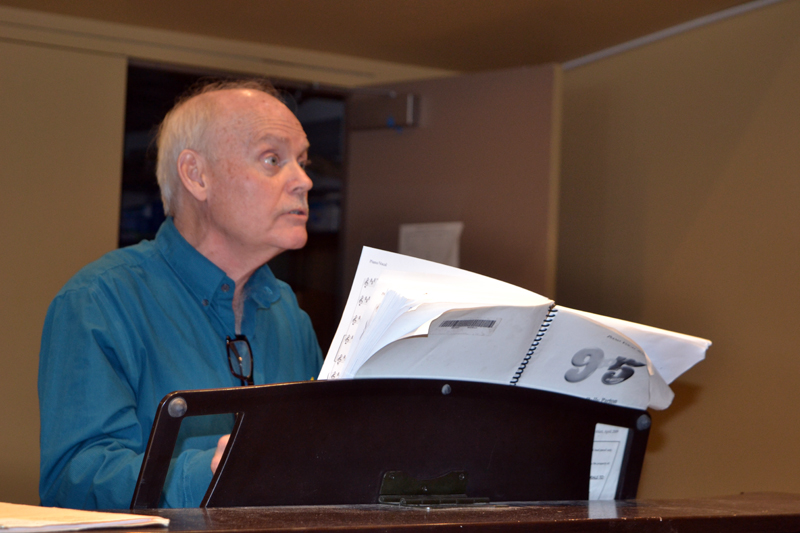 “This is your Emmylou Harris moment!” said “9 to 5” music director John Mulcahy encouragingly from behind the piano in the Porter Meeting Hall at Skidompha Library to Robinson at one point as she was preparing to launch into the catchy song “Backwoods Barbie,” one of the first-act gems.

Notably, all of the music and lyrics in the play were written by Parton. The original musical debuted on Broadway in April 2009.

Mulcahy had the chorus go over the backup parts in “Here for You,” a bluesy number in the first act. “Good! That’s coming,” he said, adding that he would like to hear “a little more Sammy Davis” in the singers’ delivery, which prompted sustained laughter from everyone in the room.

Coaching singers on the song “Shine Like the Sun,” Mulcahy commented that his favorite part of the piece is “the a cappella part.” Robinson’s voice cut through beautifully toward the end of the song – without being miked, it should be noted – as the ensemble sang the words “shine like the sun.” The harmony on the last word, “sun,” was goosebump-inducing. 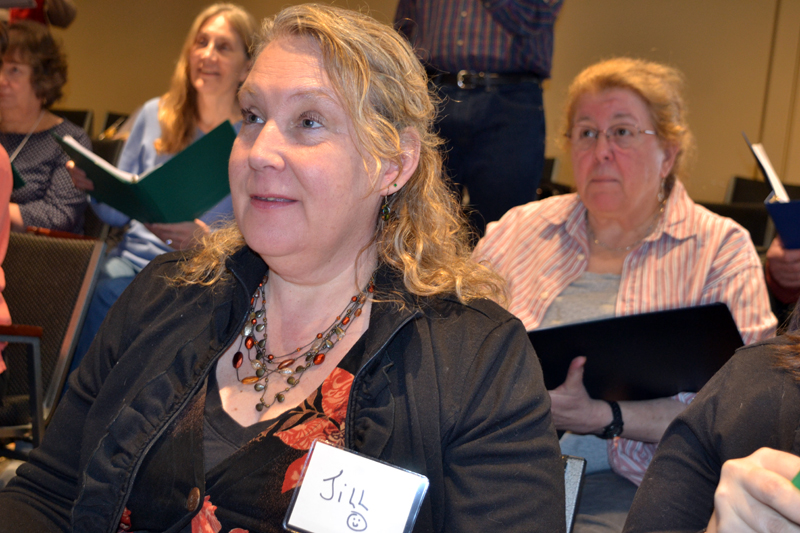 “The original movie came out in 1980 — quite the different time from now. But it has staying power,” said Lincoln Theater Executive Director and Double-D chorus member Andrew Fenniman after the rehearsal. “It was just announced that the original cast is getting together to make a sequel – almost 30 years later. So the story obviously resonates …

“A few of the songs still give me chills,” Fenniman said, “even after having heard them so many times. But maybe that’s also about the incredible talent that’s come together from across the Midcoast.”

Fenniman said that he had “debated long and hard if, in this age of #MeToo, if we really could do this musical, which takes place in 1979, when office behavior was more like that seen in ‘Mad Men.’ As we thought about it, though, the musical really is about the women – and how they take control of the business, their relationships, and their lives. And how they turn things upside down with their boss. So while some of the innuendos are of another era, their stories still ring true.” 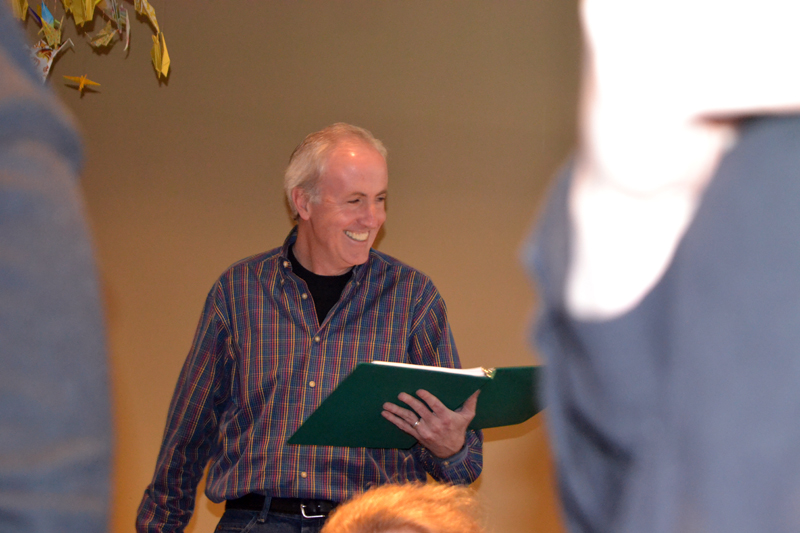 Lincoln Theater Executive Director and “9 to 5” chorus member Andrew Fenniman has a light-hearted moment at the March 25 rehearsal for the upcoming show. (Christine LaPado-Bgrelia photo)

Fenniman heaped praise on the production as “such a huge community endeavor, from all the folks working backstage building and painting to all the members of the company learning their music and lines while bringing them to life. Everyone is working so hard.”

The show is not recommended for children under age 15.