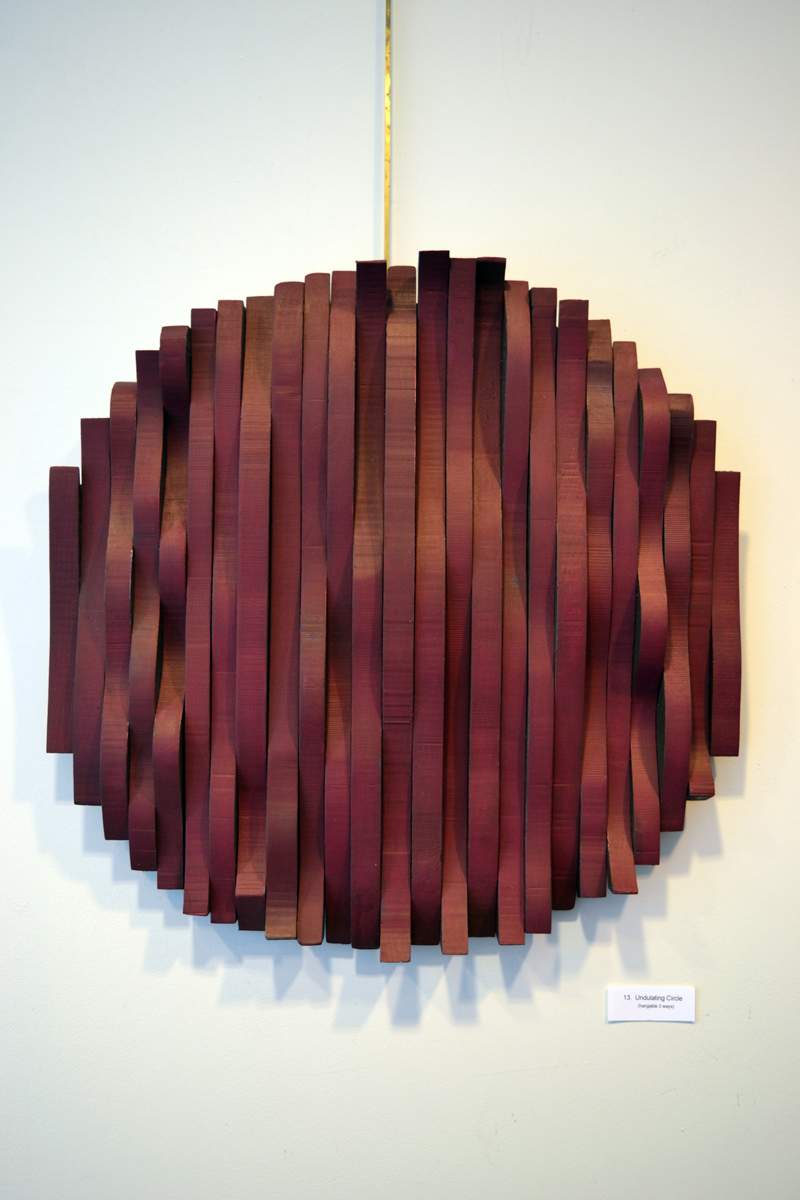 Damariscotta artist Bernice Masse Rosenthal is a “seasoned recycler,” as she puts it in her artist’s statement accompanying her new exhibit in The Carey Gallery at Skidompha Library. As such, she has amassed a wealth of discarded wooden items and wood scraps, some of them from her days working as a volunteer “friend” at The Carpenter’s Boat Shop in Pemaquid. “I can never resist any interestingly shaped piece of wood, big or small,” she writes. Rosenthal recycled a number of these interesting pieces of scrap wood, turning them into the 20 wood-assemblage pieces currently hanging on the walls of the cozy library gallery.

Rosenthal, as anyone who saw her wood assemblage and collage show in Pemaquid Watershed Association’s office-gallery in Damariscotta late last year knows, is good at what she does. Viewers of the Carey Gallery show will recognize some pieces from the PWA show, including “Pablo’s Guitar,” “Purple Mirror,” “Metropolis,” and “Fiesta,” a playful assemblage piece in red and gray featuring a sort of “robot bird” motif.

Carey Gallery show-goers will also find a number of new Rosenthal pieces, notable for their creativity and colorfulness. Rosenthal studied oil painting in her earlier years at the School of the Museum of Fine Arts in Boston. Her painting background is evident in several of her new pieces, like “Split Frame #1” and “Split Frame #3,” each consisting of “2 parts, each hangable 4 ways,” as the accompanying cards point out.

“Split Frame #1” is a happy mix of blue, purple, fuchsia, and a color like that of ground turmeric. These deep, satisfying colors – along with black – are painted artfully onto both sections of the piece, making each resemble a Cubist painting. Equally reminiscent of Cubism is “Split Frame #3,” which sticks to warm, spicy colors – orange, turmeric – with only a hint of blue.

Another piece, an untitled rectangular one near the entrance to the children’s library section, is even more colorful – with green, purple, pink, orange, and more on a field of black. This abstract piece could be hung four different ways, it seems, though there is no accompanying card that says so.

Rosenthal’s “Undulating Circle” is a real eye-catcher. The moon-shaped hanging disc – “hangable 3 ways” – is made of numerous thin lengths of wave-cut pieces of maroon-painted wood. The crest of each piece of wood catches the light while the troughs are in shadow, creating the pleasing illusion that the piece is painted in different shades of maroon and even brown, depending on the light in the room. 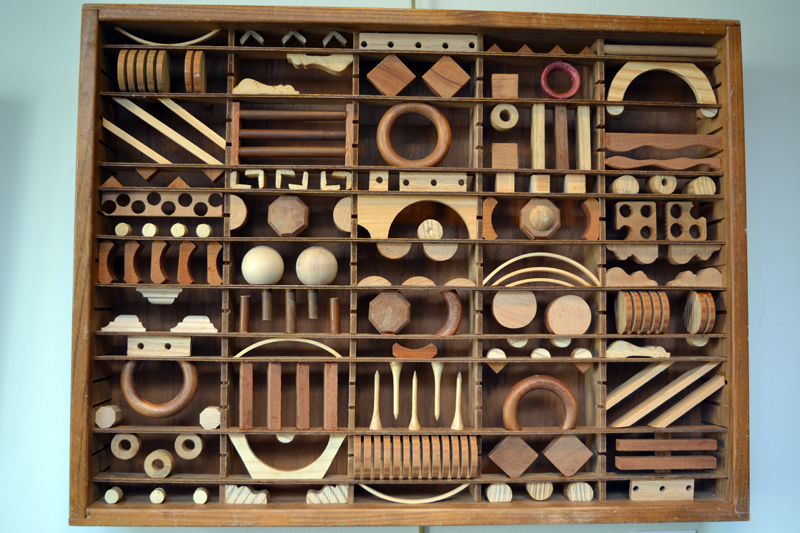 Two large wall hangings made from cast-aside cassette tape boxes are similarly striking. For “Cuneiform Calendar,” Rosenthal inserted numerous colorfully painted little pieces of wood cut to resemble cuneiform script along the narrow shelving of the wooden box. The effect is that of writing along designated lines, like some sort of handwriting practice book for ancient Sumerians. Brown-hued “Cuneiform Diary” is similar, though Rosenthal has removed some of the shelves of the tape box so as to include golf tees and other interestingly shaped larger wood pieces in the mix. 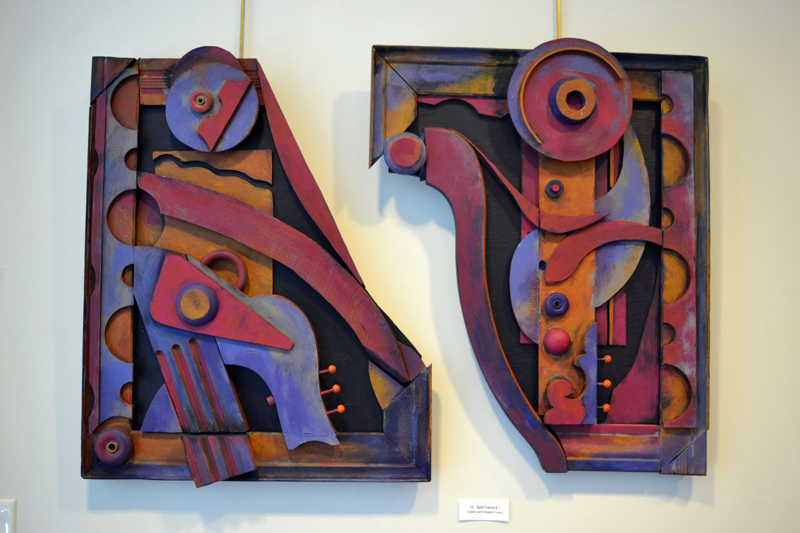 “My goal as an artist is to share my ideas, vision, and joy with others,” Rosenthal writes. “Let yourself really see what is possible – look around you – nearly everything has the potential for a new life.” In her current show, Rosenthal has achieved her stated goal. Her Carey Gallery exhibit is visually interesting and inspirational. One can leave it with fresh ideas and a newly opened mind for the possibilities that await at every turn.

Rosenthal’s exhibit will remain on the walls of The Carey Gallery through Tuesday, Oct. 31. The gallery is located at the rear of Skidompha Library, 184 Main St., Damariscotta.