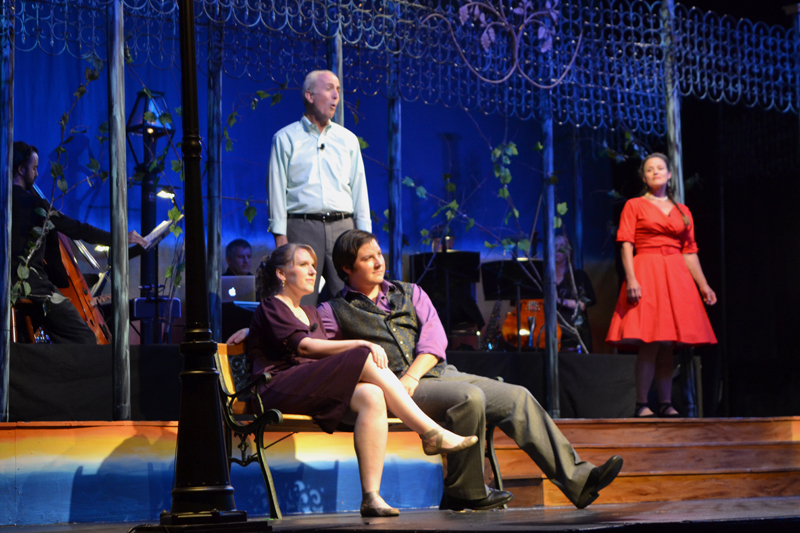 Andrew Fenniman (standing) sings “That’s the Way it Happens,” from the 1945 Rodgers and Hammerstein musical “State Fair,” in a scene from “A Grand Night for Singing” with Emily Sue Barker and Roosevelt “Robo” Bishop (seated) as Laurie Brown looks on. (Christine LaPado-Breglia photo)

When someone emphatically describes a performance as “the best show ever,” as one individual did to this reviewer on the night of Thursday, Aug. 15, referring to LCCT’s production of “A Grand Night for Singing: The Songs of Rodgers and Hammerstein” at Lincoln Theater in Damariscotta, one pauses and asks oneself, “Really?”

In the case of “A Grand Night for Singing,” which closed Aug. 17 and featured more than 20 talented local performers plus a live orchestra (not to mention an artistically designed set courtesy of the expertise of Lincoln Theater Technical Director Damon Leibert and set designer John Mulcahy), one can easily understand this individual’s point.

“A Grand Night for Singing” made for a grand night at the theater.

The musical revue was described accurately in a press release advertising the LCCT show as “an emotional journey through the various stages of love, with musical numbers selected from the Rodgers and Hammerstein canon by the original developers, Walter Bobbie and Fred Wells, who pored over scores for all 11 Rodgers and Hammerstein musicals, searched for trunk songs and rarities, and waded through the archives for several months.”

Directed and choreographed by Emily Mirabile, known for her work with the area’s Y-Arts program for youth, among other things, LCCT’s “Grand Night” was a seamless presentation of familiar, catchy tunes delivered enthusiastically and capably by a host of well-known local singer-actors, such as Victoria Hamilton (of LCCT “Mary Poppins” fame), the entertaining Roosevelt “Robo” Bishop, and Boothbay actor and playwright Soren Barker. 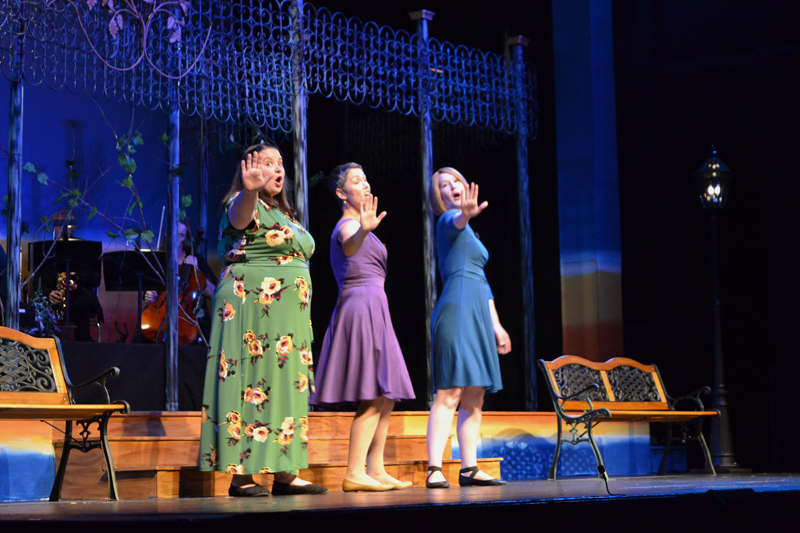 From left: Emily Mirabile, Victoria Hamilton, and Carissa McCurdy perform the song “I’m Gonna Wash That Man Right Outta My Hair,” from the 1949 Broadway musical “South Pacific,” during the LCCT production of “A Grand Night for Singing” on the evening of Thursday, Aug. 15. (Christine LaPado-Breglia photo)

From the opening medley foreshadowing the popular songs to come – such as “The Surrey with the Fringe On Top,” from Richard Rodgers and Oscar Hammerstein II’s very first musical “Oklahoma!” and the lovely “If I Loved You,” from “Carousel” – to the full-company closer consisting of “Impossible,” from “Cinderella,” and “I Have Dreamed,” from “The King and I,” “Grand Night” offered the audience that “best show ever” experience because it was refreshing, infectious, and well-presented, and it appealed to the most satisfying of nostalgias – the live rehearing of fabulous songs from the fabulous team of Rodgers and Hammerstein.

Local theater staple Joe Lugosch offered his smooth voice and gentle vibrato in his take on “The Surrey with the Fringe On Top,” which also featured Taylor Fish, Jane Bertelsen, Natalie Wright, and Laurie Brown. He also performed on several songs in the opening of the second act, including “The Man I Used to Be,” from “Pipe Dream,” which premiered on Broadway in 1955. Lugosch, as his fans know, brings much to the table in his performances.

The company’s performance of the infectious tune “Honey Bun,” from “South Pacific,” was a standout (“A hundred and one pounds of fun, / That’s my little honey bun!”). It was immediately followed by “The Gentleman is a Dope,” from “Allegro,” performed admirably by Hamilton.

Another standout piece was Andrew Fenniman’s rendition beneath an onstage street lamp of “Love Look Away,” from “Flower Drum Song” (“Wanting you so, / I try too much. / After you go, / I cry too much”). Reed-Cox’s sensitive cello lines gave just the right support to Fenniman’s fine singing of this poignant song.

One left the theater that night with the satisfying feeling that one gets from total immersion in a night of song that pushes all the right buttons and leaves one happily reprising the lyrics “It’s a grand night for singing!” out loud as one descends the theater’s steps to go to one’s car.

Lincoln Theater’s calendar of events is online at lcct.org/calendar.