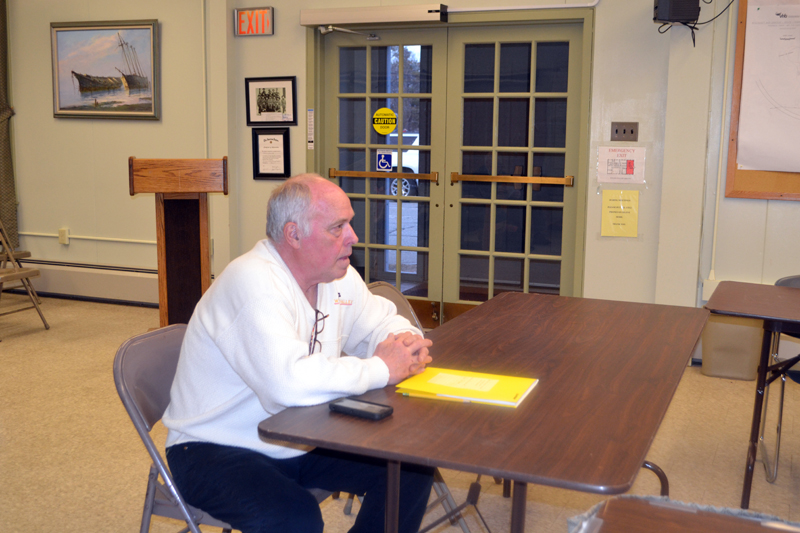 Michael Hilgendorf presents a plan to convert the former NAPA Auto Parts building into a child care facility during a meeting of the Wiscasset Planning Board on Monday, April 10. (Charlotte Boynton photo)

The Wiscasset Planning Board is considering a proposal for a preschool, after-school program, and toy store at the 179 Bath Road property formerly home to NAPA Auto Parts.

The planning board did not take action on a site plan review application from Kimberly and Michael Hilgendorf at its meeting Monday, April 10, saying it would not take action until the applicants provide more information and receive the state’s OK for the project.

Michael Hilgendorf presented the application to the Wiscasset Planning Board on Monday, April 10. The Hilgendorfs plan to add another building for a play area in the future.

Hilgendorf told the planning board he plans to apply for a license to serve 21-49 children at the facility.

Planning board member Al Cohen said the town could approve his application after the state approves the use of the site, or approve the application pending state approval.

Planning board member Debra Poller suggested that Hilgendorf talk with the Wiscasset School Department about his plans.

“We haven’t done that yet, but we will,” Hilgendorf said.

Planning board member Lester Morse expressed concern about the location on Route 1 and suggested a sign to alert drivers of the facility.

Kimberly Hilgendorf said they have been looking to open another child care facility, and think the NAPA building would be a good location.

“We are really excited about it,” she said. “Things are moving along fast. We are hopeful we will be up and running for the beginning of the 2017-2018 school year.”

After Michael Hilgendorf outlined his plans to the board, it was determined that the site plan needs additional work.

Town Planner Ben Averill suggested that he could work with Hilgendorf to develop the information and documentation the planning board will need.