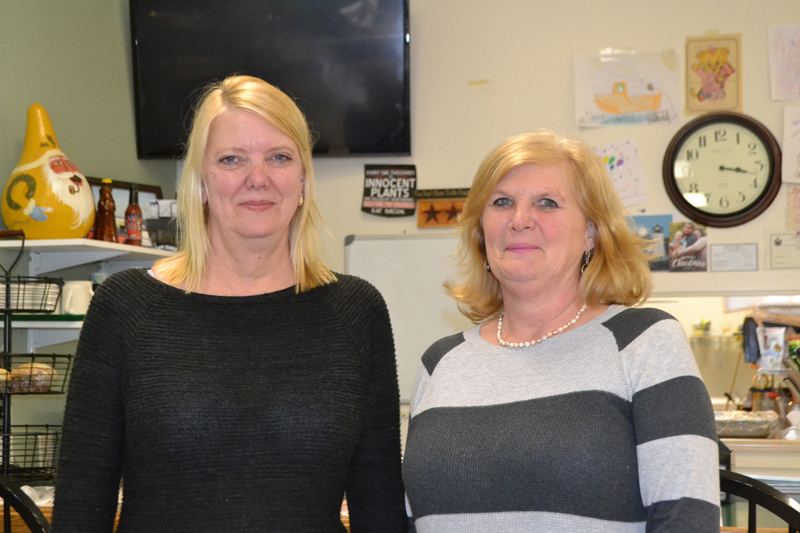 The Marketplace Cafe, on Route 1 in Wiscasset, will have a change of ownership May 1. Few customers will likely notice the change, as the restaurant will have the same cooks, the same servers, and the same menu with a few additions.

Cindy Bradford, owner of the restaurant since 2013, will turn the reins over to her friend and co-worker of many years, Kelley Churchill.

When Cindy took over the restaurant in the Wiscasset Marketplace, across from Shaw’s, her goal was to run it for five years. Now those five years are up, and she wants to be able to travel with her husband, Dan Bradford. Dan Bradford works for the Federal Emergency Management Agency, and his work often sends him to warmer climates.

Cindy Bradford and Kelley Churchill have worked together in local restaurants since 1995. Each always wanted to own a restaurant of her own. In 2013, Cindy reached her goal. Now Kelley is about to accomplish hers. Each gives credit to the other for their success.

“I could never have done this without Kelley,” Cindy said. “We work very well together and have fun doing it. We have worked together for so long, people get confused as to which one is Cindy and which one is Kelley.”

“I wouldn’t take over the restaurant without Cindy,” Kelley said.

The two women went to work at the South Gate Restaurant in Bath in 1999, and had three different bosses while they were there. Their last boss, Steve Leask, worked at Bath Iron Works and was a regular at South Gate.

When he found out the restaurant was for sale, he bought it, with no restaurant experience, and continued to work at Bath Iron Works. He asked Cindy and Kelley for a five-year commitment to stay on the job, which they honored. When Cindy took over the Marketplace, Kelley came with her.

They worked their last day at South Gate on Sunday, May 19, 2013, and opened the Marketplace Cafe the following Tuesday. Cindy took over the restaurant from her cousin, Diane Chapman.

Cindy said Diane told her she was going to sell the restaurant and offered to sell it to her. “I said, ‘OK, let’s do it.’ We quit on Sunday and opened on Tuesday,” Cindy said. 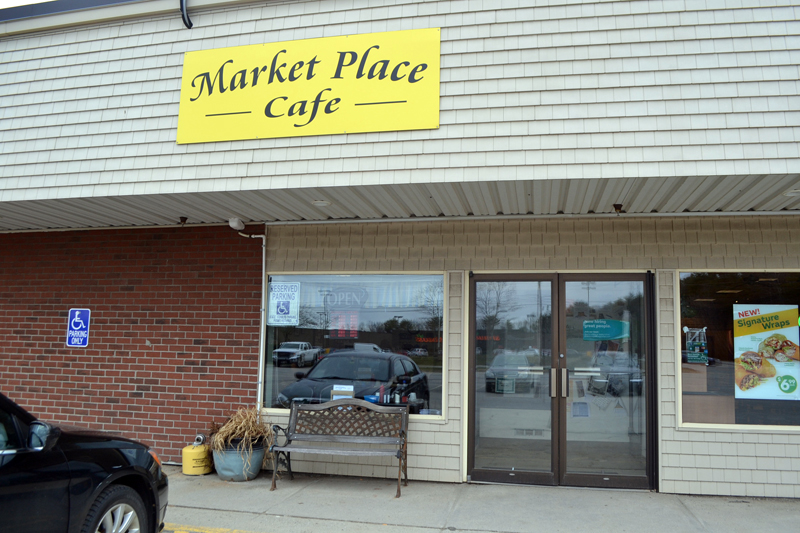 The Marketplace Cafe, in Wiscasset, will have a new owner May 1. The business will have the same name, the same crew, and the same good food, according to soon-to-be owner Kelley Churchill. (Charlotte Boynton photo)

Beginning May 1, Cindy will become an employee of Kelley’s. She will work in the kitchen or in the dining room, wherever she is needed, when she is not traveling with her husband. “I am very thankful that I will be able to help her,” Cindy said.

Cindy said she has been fortunate over the past five years to have a good crew. She has been able to take vacations knowing the business was in good hands and well-supported by loyal customers.

“Our customers are our friends,” Cindy said. “That is what has established this business, along with serving them good food cooked the way they like it.”

Kelley said she plans to make few changes to what has worked well for five years. She plans to add a few items to the menu and, later on, give the restaurant a face-lift with new paint and other work in the dining room to give the space a nautical theme.

Like Cindy, Kelley will have help from her husband, Victor, who will work in the restaurant on Saturdays and take over the bookkeeping for the business.

Dan Bradford would often help in the dining room by clearing tables when the waitresses were busy. Cindy often said she missed her husband’s help in the restaurant when he was away.

Although Cindy and Kelley are close friends and have worked well together for many years, they have different personalities. Cindy is easygoing and stays calm during upsets in business, while Kelley becomes excitable.

“That is just the way I am. I am going to work on it,” Kelley said with a smile. “I know I have some big shoes to fill. I am sure if it wasn’t for Cindy I wouldn’t be doing this.”

The Marketplace Cafe is open seven days a week. It is a family restaurant, where a customer is never rushed regardless of how busy they get, a place  to meet friends and make new friends.

The hours will remain the same: 6 a.m. to 2 p.m. Monday-Friday and 6 a.m. to noon Saturday and Sunday. Although the cafe does not officially open until 6 a.m., it does not turn away coffee customers who come in at 5:30.