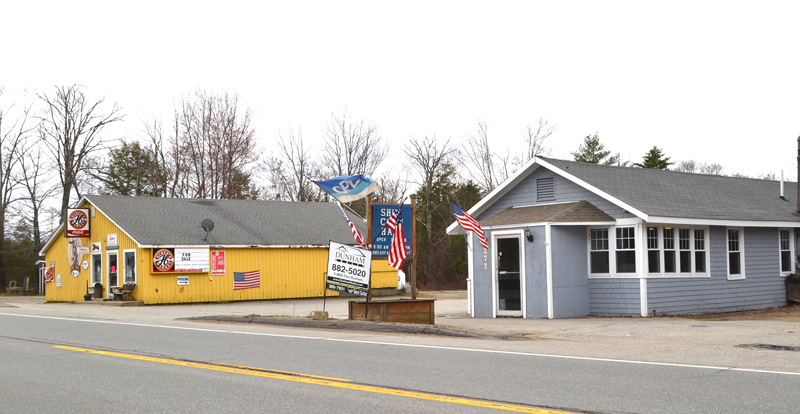 Huber’s Market and Ship’s Chow Hall, on Route 1 in Wiscasset, are for sale due to the owner’s illness. The restaurant remains open, but the market has closed. (Charlotte Boynton photo)

Huber’s Market and Ship’s Chow Hall, on Route 1 in Wiscasset, are for sale. The market closed the week of April 16, but the restaurant remains open.

The businesses are for sale due to the illness of owner Tina Fitzsimmons, who has owned and operated Ship’s Chow Hall since 2004 and Huber’s Market since 2015.

Huber’s Market was once a legend in Wiscasset for its Italian sandwiches and pizza. The late Gordon Huber owned and operated Huber’s Market for more than 40 years.

Fitzsimmons initially rented the Ship’s Chow Hall building from Huber and has credited him for giving her a chance to establish a business in Wiscasset.

Huber sold the property in January 2007 to Kyle Yacaben. Fitzsimmons continued to rent the restaurant building from the new owner for six years.

Yacaben operated Huber’s Market until a fire in December 2010, which closed the store for a year. Yacaben reopened the market in December 2011 and closed it again in June 2012.

Fitzsimmons purchased both buildings at auction in 2013. She leased the store to John Smigielski and Mark McGuy, who ran it for two years.

In 2015, Fitzsimmons and her partner, Lenny Santos, took over the operation of the store. Due to circumstances beyond their control, they had to close it again the week of April 16.

The restaurant will remain open with its regular hours, 5 a.m. to 2 p.m. seven days a week.

Sherri Dunbar, of Tim Dunham Realty, is the listing agent. If the businesses sell separately with the 1-acre lots, the agency will sell the remaining 6.45 acres separately, according to Dunbar.

Fitzsimmons and Santos also own Ship’s Chow Hall in Dresden. The restaurant closed in December 2017, but neither the property nor the restaurant are for sale.