Lobsterman’s Wharf in East Boothbay will reopen Thursday, Aug. 6, with a new open-air bar and dining area that makes the long-standing restaurant unlike any other in Lincoln County.

Curiosity about construction at the site has run high in the village and beyond. The deterioration of the pilings that held up the old wharf led to a complete rebuild of the wharf, which measures 150 feet long by 50 feet wide. Workers dismantled the old restaurant – originally the pilothouse on a minesweeper – plank by plank.

Thursday’s reopening will satisfy the curiosity of locals and visitors to the historic shipbuilding village.

For the first few years, they continued to operate the business as it had been done for decades, by Bill Murphy, and by Hilary and Kathleen Heaton before that. 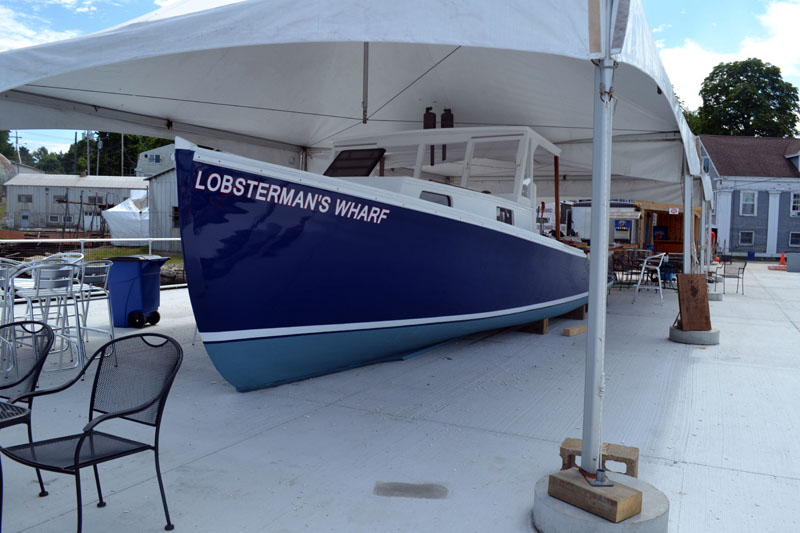 A lobster boat serves as a bar at Lobsterman’s Wharf in East Boothbay. (Charlotte Boynton photo)

But the condition of the pilings forced them to make some changes this year, taking down the restaurant and replacing the pilings and the wharf.

The all-outdoor dining and service area meshes well with the current need for physical distancing, but the Millers had settled on the concept before the COVID-19 pandemic.

“Our plans for the outdoor eating and drinking area came before the pandemic and certainly conform to the Maine (Department of Economic and Community Development) guidelines,” Eileen Miller said. “We were ahead of the game with our outdoor service planning.”

Lobsterman’s Wharf can seat about 125 guests, all within state guidelines for physical distancing.

The pandemic did make it more difficult to complete some of the work, and the project took longer than the Millers had expected.

In keeping with the couple’s positive outlook, Dan Miller said, “If we had not taken down the restaurant, we would not have been able to open early in the season anyway with the guidelines required.”

“The timing for the change is good for our guests. They are the important ones,” he said. “We wanted to make it a safe place for our guests to visit and enjoy.” 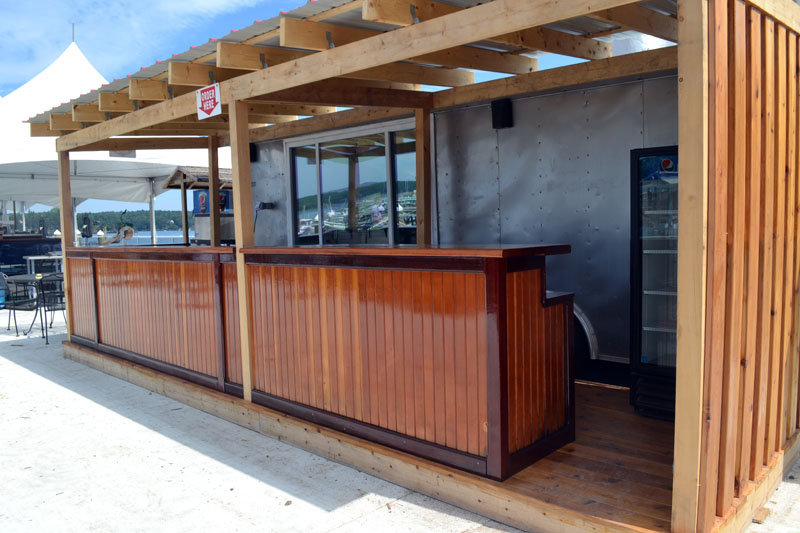 The counter outside the new food truck at Lobsterman’s Wharf incorporates materials from the bar of the old restaurant. (Charlotte Boynton photo)

Workers dismantled the old restaurant by hand and saved some of the materials to incorporate the history of the restaurant into the new version.

Since the first restaurant started out with a pilothouse from a minesweeper on the old wharf, the Millers decided to use something from the sea as the centerpiece of their new look.

They placed a lobster boat on the new wharf to serve as the bar. The bar from the old building now functions as the service counter outside a food truck on the wharf.

Other materials from the old restaurant went into picnic tables that provide seating for guests on the wharf. The railings from the old minesweeper are also being preserved.

The Millers spend half the year at their home in Bremen and the other half in East Boothbay. Both their businesses, Lobsterman’s Wharf and Ocean Point Marina, are family operations. 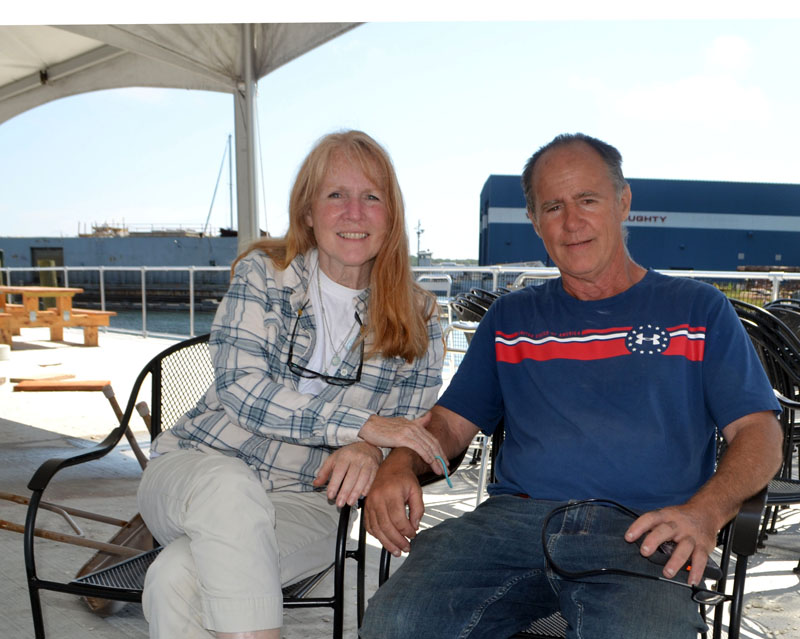 Eileen and Dan Miller own Lobsterman’s Wharf in East Boothbay. The Millers have replaced the wharf and swapped the restaurant building for an open-air concept. (Charlotte Boynton photo)

The couple has six children: sons Zack, Killian, Cormac, and Danny, and daughters Kelsea and Sinead. The children have worked in the family businesses over the years, with three of their sons now there full time.

This year, Killian is the bartender, Cormac a cook, and Danny a greeter. The other children remain involved and come down on the weekends to help out.

Dan and Eileen Miller graduated from the Merchant Marine Academy in Kings Point, N.Y., where they met.

Lobsterman’s Wharf will open at noon Thursday-Sunday. The business has not set a closing time. “We will wait to see how it goes,” Dan Miller said.

Lobsterman’s Wharf is at 224 Ocean Point Road, overlooking the Damariscotta River in the heart of East Boothbay.