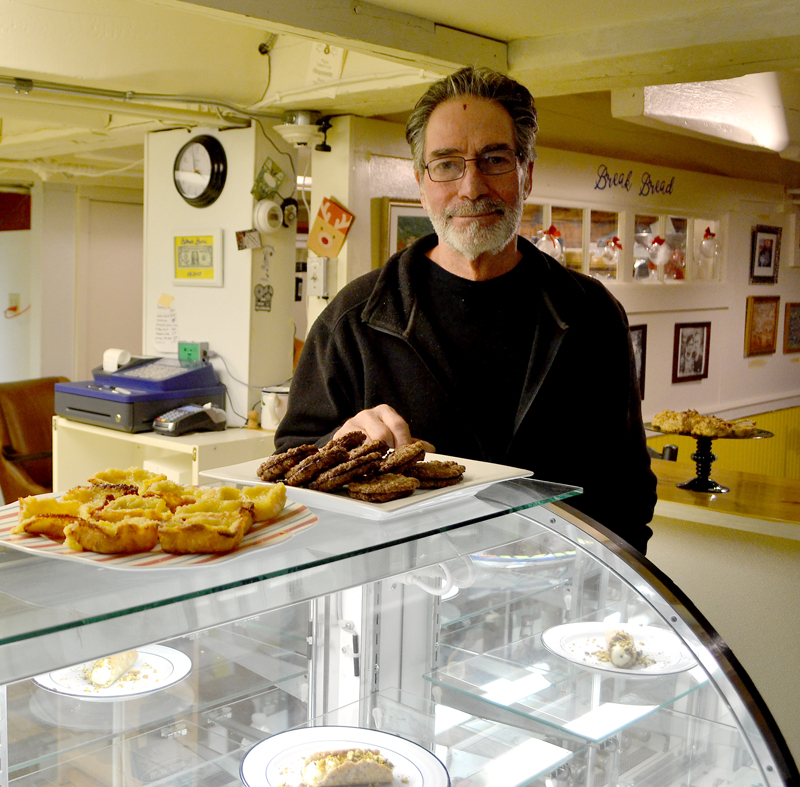 For the past few months, Bernie DeLisle has quietly operated a tiny Italian eatery in Damariscotta’s Taco Alley, relying solely on word-of-mouth and regular customers.

DeLisle, who has more than four decades of experience as a cook, opened Osteria Bucci on Sept. 21. The restaurant offers homemade spinach pies, pastries, and an assortment of Italian dishes.

This is not DeLisle’s first foray into the local business scene. He has owned and operated various ventures in downtown Damariscotta over the years, from the hat-and-accessory shop Darling and DeLisle to Aboca Beads, the latter of which is still open at 157 Main St.

More recently, DeLisle, along with his son and daughter-in-law, August and Torie DeLisle, opened Van Lloyd’s Bistro in June 2014. The restaurant offers an ever-changing menu of appetizers, main dishes, and desserts, alongside craft cocktails.

After August and Torie DeLisle departed the restaurant, DeLisle sold Van Lloyd’s to employee Meredith King in December 2016. It was then that he started to contemplate retirement.

“I really thought that was going to be it, that I’d still do things here and there, but that was sort of the end of that part of my life,” DeLisle said.

After leaving the bistro, DeLisle enjoyed his apparent retirement by spending time on his boat and helping his daughter, Olivia DeLisle, and Zacharias Rankin prepare to open Reel to Reel Music in Elm Street Plaza.

However, DeLisle could tell he was growing restless.

“It wasn’t until about June when I said, ‘I have to go out and do something. I can’t just sit out on the bench and watch the world go by,’” DeLisle said.

Around the same time, he learned the space on Taco Alley was available for rent. The location was previously home to Paco’s Tacos and Cocinas Underground, but hadn’t had a tenant in “quite some time,” DeLisle said.

When DeLisle reached an agreement with the landlord to rent the space, he pictured opening an eatery that would serve only homemade spinach pies and debated naming the venture something along the lines of Nana Bucci’s Spinach Pie Factory. 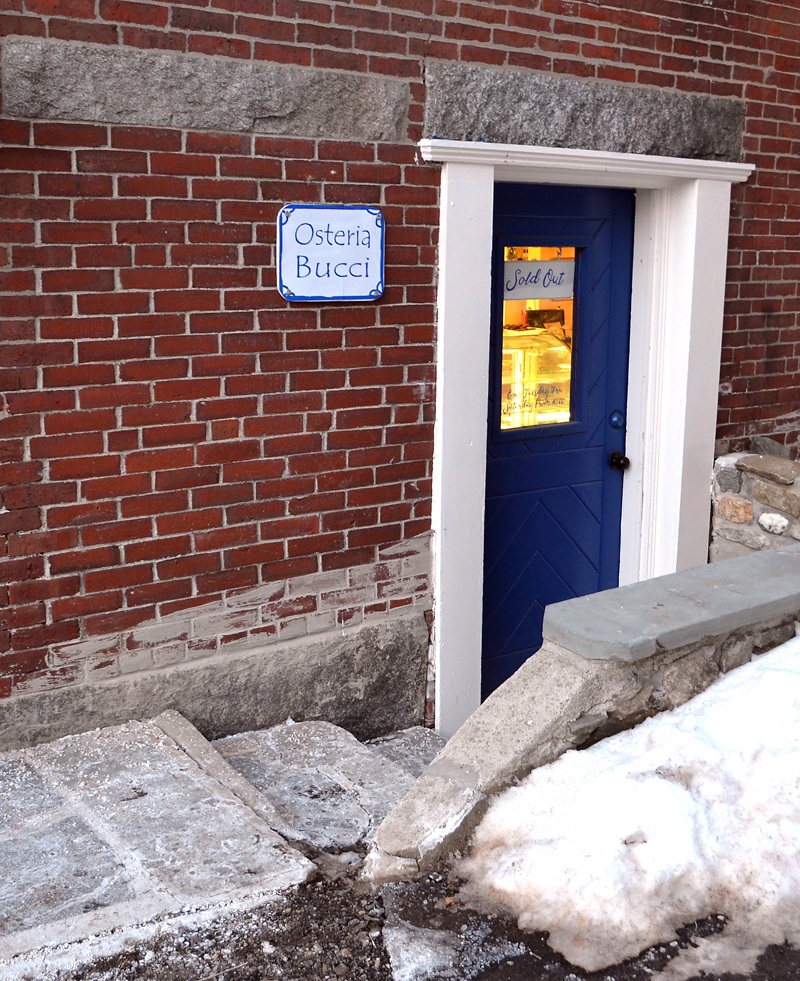 “I pictured something close to what you would see in Portland and the food scene there,” DeLisle said. “There are more of these niche shops popping up where you can just run in and grab something that’s inexpensive and good for you, like a spinach pie, and then head out and go about your life.”

The plan changed over time and DeLisle decided to name the business Osteria Bucci. An osteria is an Italian restaurant that is typically simple or inexpensive. Bucci pays tribute to DeLisle’s Italian grandparents, whose photos are among those hanging on the eatery’s walls.

DeLisle opened Osteria Bucci with three spinach pies – one with black olives, another with meat, and a third with Gorgonzola cheese – and a variety of desserts and pastries.

“What surprised me was that people really started to respond to the pastries,” DeLisle said. “At the bistro and other places I worked, I always hired that out or had someone else work on it. I stayed away from it, but thought I might try it here and people responded, so I kept making them.”

One of the most popular pastries is a cannoli with a unique twist. While the cream filling is a traditional recipe, the shell of the cannoli is baked, not fried.

Although he was originally conflicted about making the “non-authentic” cannolis, DeLisle said the modified treat has received rave reviews from customers.

DeLisle later branched into offering hot meals, including the “very popular” eggplant parmesan and lasagna made with homemade pasta and sauce. “I figured if I’m going to do pasta, it’s going to be homemade,” DeLisle said.

A majority of the recipes come from the Italian side of DeLisle’s family, for whom the restaurant is named. Growing up in Providence, R.I., it wasn’t uncommon to have a large gathering of family members sit down for meals, he said.

“I spent a lot of time in the kitchen watching my mother and my grandmother cook,” DeLisle said. “So doing this is really about going back to the very beginning and making what works.”

DeLisle describes Osteria Bucci as “cooking on a home scale.” He makes portions for the eatery as he would make the recipe in his own home when inviting friends and family for dinner. He arrives early each morning the business is open to prepare the day’s food. Typically, the coffee and some of the pastries are ready for customers by 8:30 a.m.

DeLisle likes to have the cooking for the day finished by around 10 a.m. so he can be free to chat with customers as they come in. In the beginning, many customers were friends or family members, but DeLisle also received visits from people “just stumbling across” the restaurant while walking around town.

“That’s really my favorite part, seeing people’s reactions when they first find it,” DeLisle said. “They come in a little wide-eyed and you can just see they’re thinking, you know, ‘what is this place?’ And so as I’m explaining it to them, you can see them understand it a little bit more, but that first wonder is the best.”

The eatery typically closes around 2 p.m., but the time is subject to change depending on when DeLisle runs out of food. 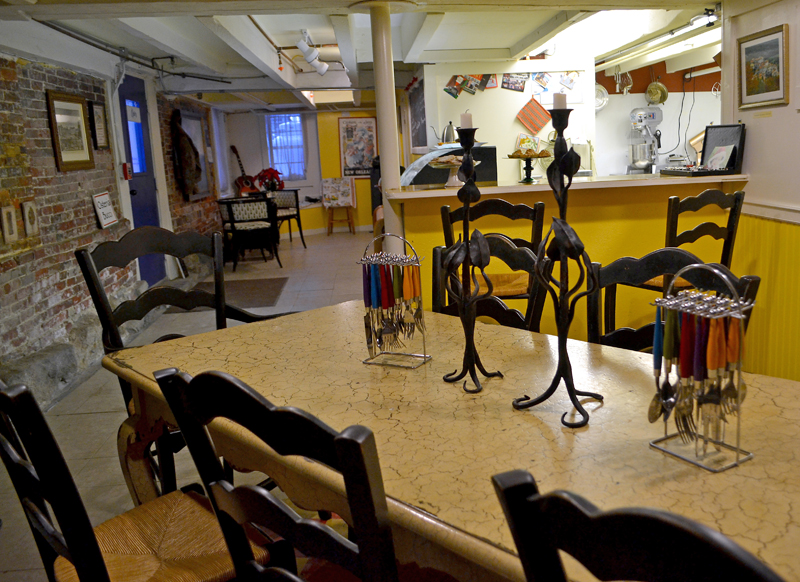 Osteria Bucci seats a total of 12 people, with two spaces at the counter looking into the kitchen, a large table that seats eight, and a two-person table on the other side of the restaurant. (Maia Zewert photo)

Osteria Bucci is a one-man operation. “It’s just me here, and so I kind of stayed away from advertising for a while because I didn’t want it to be too much at the beginning,” DeLisle said. “I just wanted to do a basic thing, keep it as simple as possible.”

DeLisle also wants the restaurant to have a home-like feeling. To accomplish this, he completed a full renovation so the kitchen would take up a majority of the space.

The renovation seems to have had the desired effect, DeLisle said, as it’s not uncommon for customers to bring their own dishes to the sink after they finish eating.

The physical space of the restaurant, at below ground level, helps diners detach from the outside world, DeLisle said.

“When people are down here, we don’t really have a sense of what’s going on everywhere else. You can’t even really hear the traffic or anything up there,” DeLisle said. “Everything fades away and time just stops.”

The atmosphere helps customers connect with one another as well, DeLisle said. More than once in his more than 35 years of restaurant experience, he witnessed two people sit down to dinner together only to spend most of the meal on their phones. 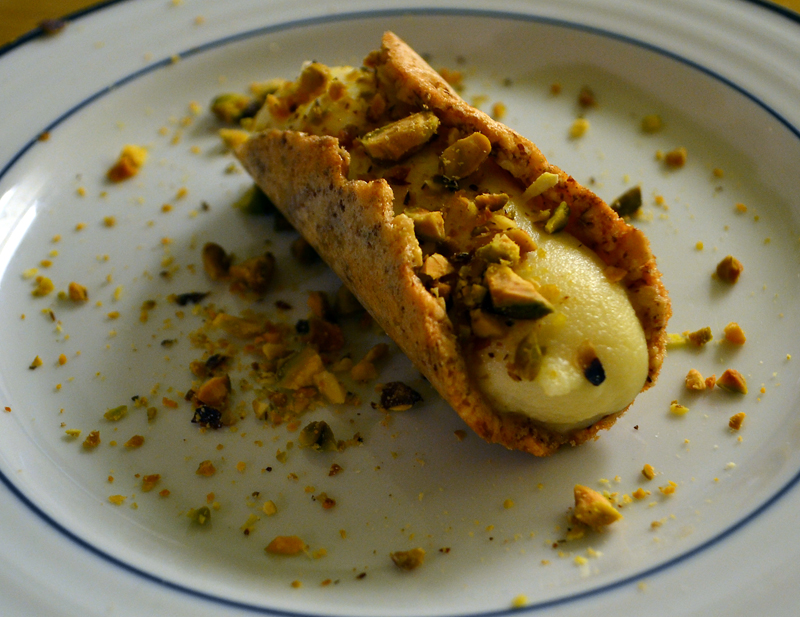 A cannoli made by Bernie DeLisle at Osteria Bucci. (Maia Zewert photo)

The seating at Osteria Bucci facilitates conversation between customers. There are two seats at the counter facing into the kitchen – the favorite spot for DeLisle’s close friends and family – and another two chairs on the opposite side of the restaurant offer a more private dining experience, DeLisle said.

However, many customers will likely take a seat at the large table, which seats eight people. DeLisle said he has witnessed conversations take place between people who had arrived separately and just happened to sit down at the table.

“That’s the thing: people come down to eat, and they never know who they might end up talking to,” DeLisle said. “Food just brings people together like that.”

In addition to the eatery’s regular hours, DeLisle has started catering get-togethers and private parties in the space, an offering that “grew organically out of some requests,” DeLisle said. Guests can bring their own wine and enjoy a four- to five-course meal prepared by DeLisle.

Looking ahead, DeLisle said he isn’t sure how he might modify the restaurant in preparation for seasonal visitors.

“Right now this is something fun to do, so we’ll have to wait and see what that means for summer,” DeLisle said. “I may need to simplify it even more so that I can handle it, but at the same time, I really don’t want to miss summer either.”

For now, however, Osteria Bucci is open Tuesday-Saturday. The eatery’s website, osteriabucci.com, simply displays whether the restaurant is open or counts down the minutes until it does.