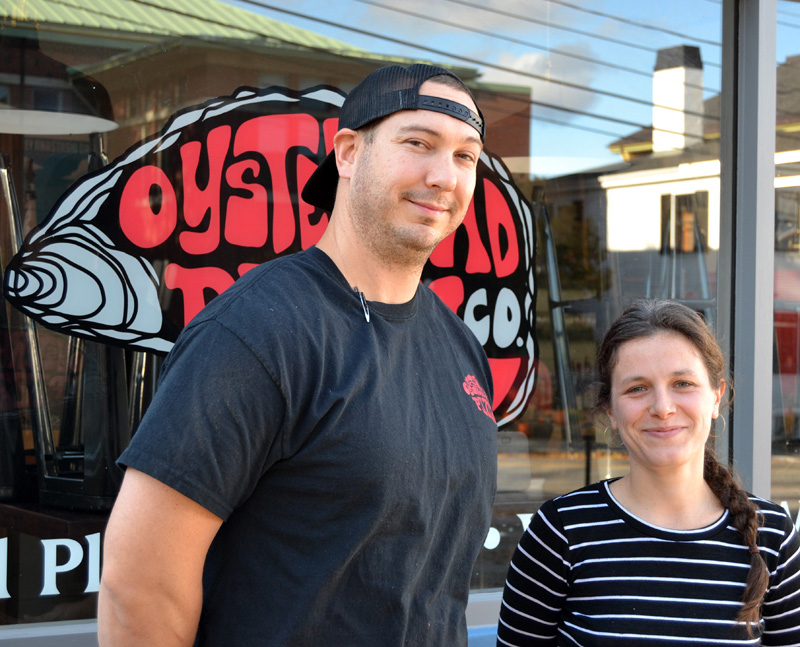 Nick Krunkkala is the head chef and Caroline Zeller the baker at the new Oysterhead Pizza Co. in downtown Damariscotta. (Maia Zewert photo)

After serving more than 500 pizzas during a soft opening over Damariscotta Pumpkinfest weekend, Oysterhead Pizza Co. celebrated its grand opening at 189 Main St. in Damariscotta on Thursday, Oct. 17.

Pumpkinfest “was a good, eye-opening run for us,” said head chef Nick Krunkkala. “It was super busy the entire time, and it showed us some things we needed to work on, and that’s what we’re doing now.”

The opening follows six months of planning and renovation by owners Alex and Rachel Nevens, who also own the Newcastle Publick House in Newcastle. Since 2011, they have operated Coveside Restaurant and Marina in South Bristol. After a successful summer, they decided not to renew the Coveside lease and to instead focus their efforts on the Publick House and their new venture.

Gifted with a “beautiful remodeled shell” of a building to lease, the couple set out to make the space their own. They wanted a clean, modern aesthetic and plenty of room for people to gather, Rachel Nevens said. One of the linchpins in the design of the restaurant is a large, L-shaped bar handcrafted by Jonathan Kelsey, of JK Custom Woodworking in South Bristol. 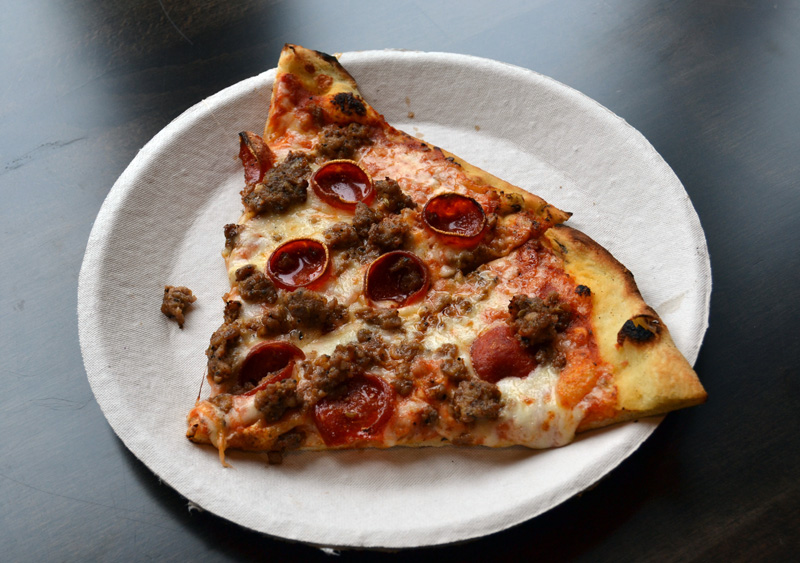 Another unique feature of the eatery is the New York Brick Oven, which stands in full view of diners. The oven, which took close to 20 hours to install, uses a combination of wood fire and gas heat and runs at about 700 degrees on an average day, Krunkkala said.

“It’s very energy efficient, it’s easy for us to control the temp and flame, and the rotating stone makes for an easy cook time,” Krunkkala said.

Krunkkala worked for Alex and Rachel Nevens at Coveside over the summer, which allowed him to get to know the staff he would be working with at Oysterhead Pizza once it opened. 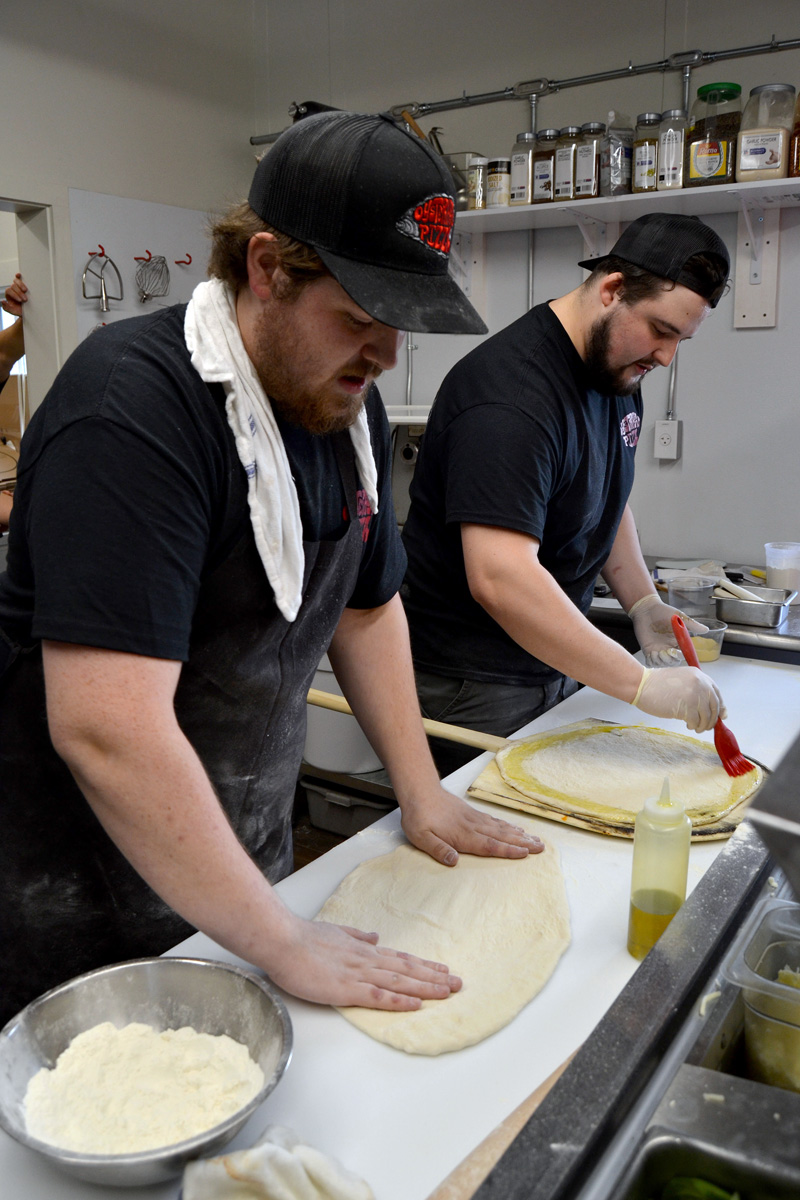 “For the most part, we were able to keep the kitchen crew from Coveside and just move them over here,” Alex Nevens said.

The pizzeria’s proximity to the Publick House “makes staffing easier, and we can move people between the two places if needed,” Rachel Nevens said.

Joining Krunkkala at Oysterhead Pizza is full-time baker Caroline Zeller, from Nobleboro. Zeller said she has always liked working in the restaurant business and was looking forward to adding some savory skills to her experience with sweet baked goods.

Zeller is the mastermind behind the pizza dough at Oysterhead Pizza. Due to the hot temperature of the oven, the dough needed to be high in moisture to keep it from drying out, she said.

“It was all about finding the right balance,” she said.

In addition to the dough and desserts at Oysterhead Pizza, Zeller will bake the bread and buns for the Newcastle Publick House.

“Having a baker in-house is really just going to up our game,” Alex Nevens said.

As head chef, Krunkkala tries to make as much from scratch as possible. The tomato sauce is made from Italian tomatoes that are roasted in the pizza oven every morning and the sausage and meatballs are made in-house. Much of the produce comes from Morning Dew Farm, in Damariscotta, and the goat cheese used on some pizzas is also locally sourced.

“The more work you do upfront by trying to make as much as you can from scratch, the better the experience is going to be for the customer, and that’s really a focus,” Krunkkala said.

While classics like cheese and pepperoni will be menu mainstays, Krunkkala looks forward to creating specialty pizzas based on what is seasonally available. Currently on the menu is the harvest pizza, which is topped with a goat cheese bechamel white sauce, Brussels sprouts, bacon lardons, and a cider reduction.

Vegan and gluten-free pizzas are in the works, and raw oysters and salads will be introduced soon. Krunkkala also plans to add more small-plate offerings and homemade pasta to the menu.

“I’m looking forward to getting really creative, and I really want to show the town what I can do besides just pizza,” Krunkkala said.

Alex and Rachel Nevens described Oysterhead Pizza as a “fast casual” eatery. Customers order at the counter and their food is brought out to them. Soft drinks and a selection of craft beer and wines are available.

Oysterhead Pizza is a “green restaurant,” with no plastic, no straws, and compostable pizza boxes and takeout containers, they said. 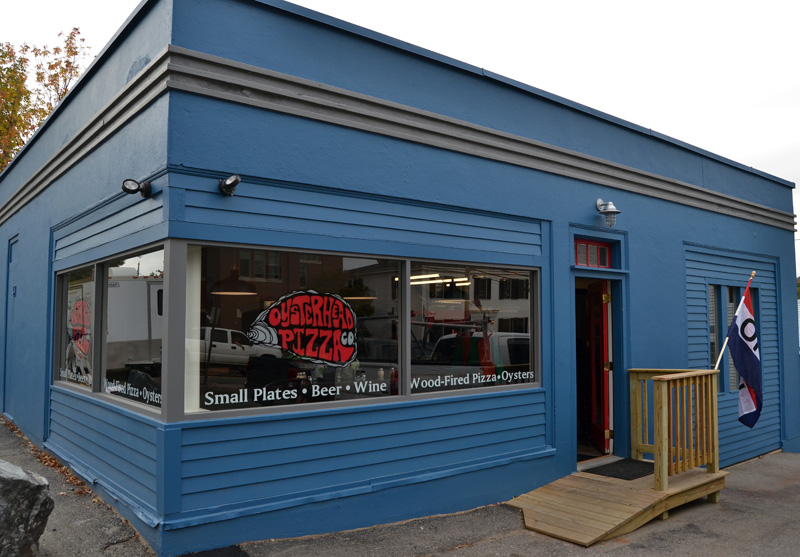 “We’re very environmentally conscious, and this is something we’re continuing to work toward at the Publick House, but it’s a harder genie to put back in the bottle,” Alex Nevens said. “We’re opening this place up as green as we can. It’s an easy decision, and it’s the right decision.”

With Oysterhead Pizza up and running, the Publick House will no longer serve pizza. Alex Nevens said pizza was added to the Publick House menu “almost as an afterthought,” but the menu item proved more popular than expected while also taking up valuable oven space.

“Now we’ve given it a place to grow and be appreciated,” he said. 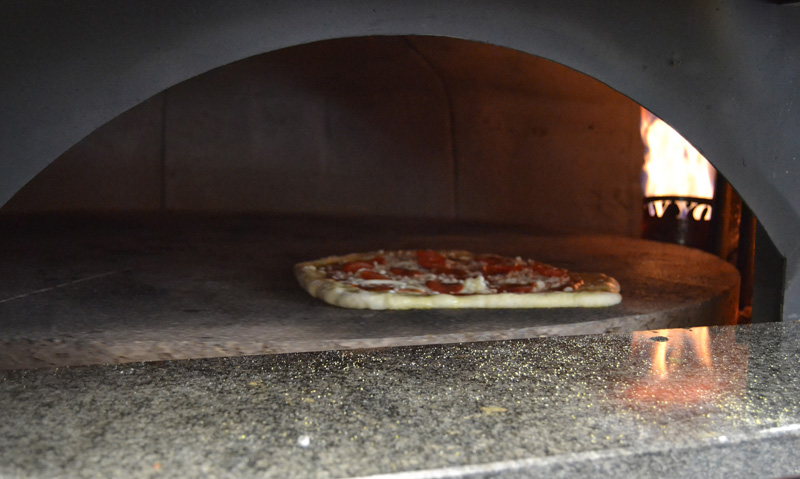 A pepperoni pizza bakes in the oven at Oysterhead Pizza Co. in downtown Damariscotta the afternoon of Friday, Oct. 11. (Maia Zewert photo)

Oysterhead Pizza will not have live music or entertainment, which is what the Oysterhead Lounge at the Newcastle Publick House is known for. On nights the lounge is open, late-night pizzas will be brought over after the Publick House kitchen closes.

“It’s two separate businesses, but we’re really focused on having them work together and support one another,” Alex Nevens said.

Pizza by the slice is available at Oysterhead Pizza during the day, while the full dinner menu is offered beginning at 5 p.m. Whole pizzas are available as 12- or 16-inch pies, with prices ranging from $11 to $24 based on size and toppings.

Takeout is available, and the business is exploring a delivery option. 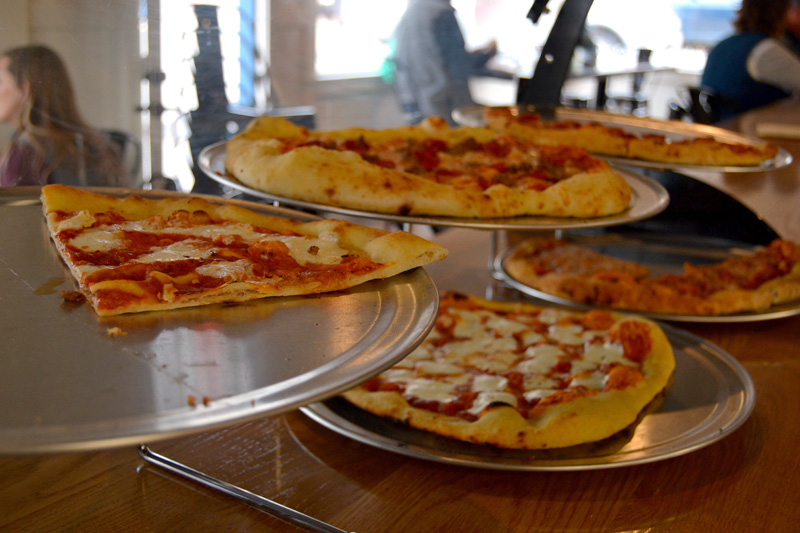 Oysterhead Pizza Co. offered a limited menu during its soft opening over Damariscotta Pumpkinfest weekend, including meat pie, cheese, and margherita slices during the day. The whole menu was available after 5 p.m. (Maia Zewert photo)

So far, Oysterhead Pizza has received positive reactions from customers.

“I really love the openness of the kitchen and the opportunity to do some of the front of the house, because you get to interact with the community more,” Zeller said. “And the responses from the community have been great.”

“Everybody’s been really excited, and I think it’s because there’s been this reemergence of the town,” Krunkkala said. “I really like the young, fresh food faces and all of this creativity across town really just pushes us all to up our game a little bit and makes us all better.”