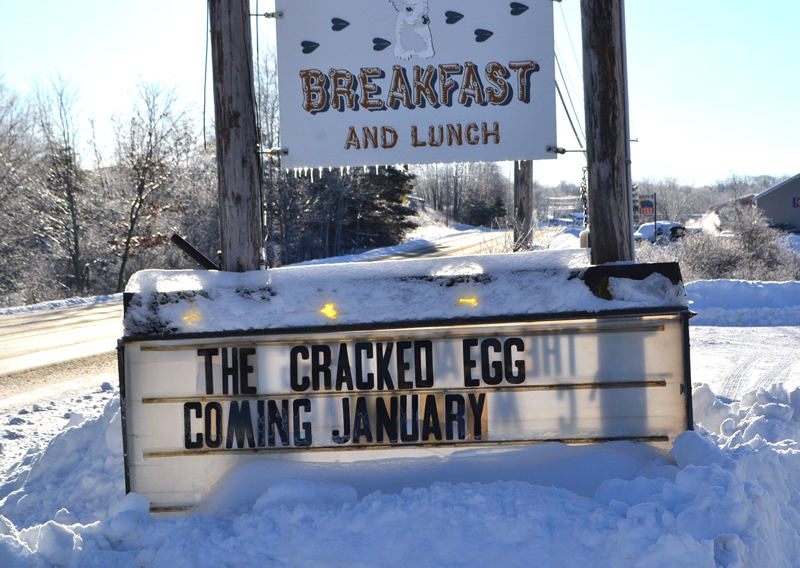 A sign along Gardiner Road in Wiscasset announces the impending arrival of The Cracked Egg. The Hunters Breakfast sign will soon come down and a permanent sign for The Cracked Egg will go up in its place. (Charlotte Boynton photo)

The former Hunters Breakfast restaurant on Gardiner Road in Wiscasset will reopen under new management as The Cracked Egg on New Year’s Day.

The building recently had a facelift. The Hunters Breakfast sign will soon come down and a new sign will go up for the new restaurant. John and Tammy Chapman are the proprietors.

The Chapmans are not new to the restaurant business. John, a wormdigger by trade, once owned what is now the Alna General Store, and Tammy’s reputation as a cook spans many years in many local restaurants.

Most recently, she was a cook at The Marketplace Cafe on Route 1 in Wiscasset. She worked there until this past week, when she got done to prepare for the opening of The Cracked Egg. Prior to that, she was the cook at The Alna Store for 11 years.

After working for other people for many years, the Chapmans decided it was time to have their own restaurant. The Cracked Egg will employ about six people.

The new restaurant will be open from 5 a.m. to 2 p.m. seven days a week, serving breakfast and lunch with homemade muffins and other baked goods. The business will offer discounts for senior citizens every Tuesday and Thursday.

“I want to recognize our senior citizens. They are often forgotten. I want them to know they are not forgotten,” Tammy said. 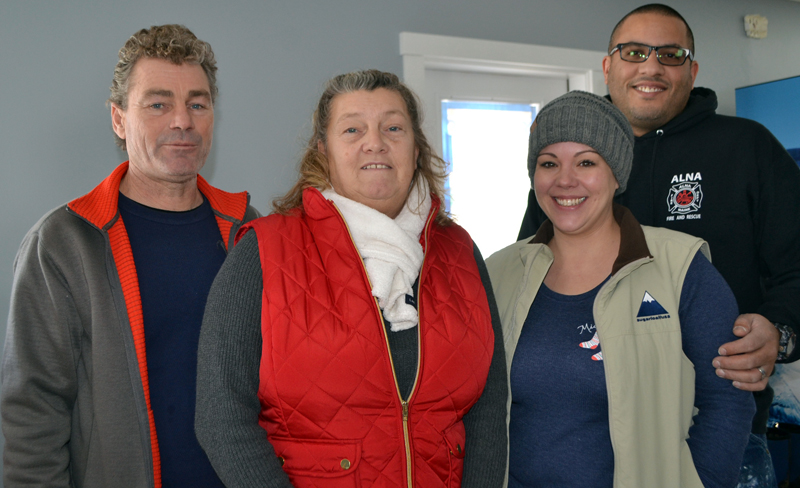 From left: the owners of The Cracked Egg restaurant in Wiscasset, John and Tammy Chapman, take a break from preparations from the opening, along with their helpers, Jenny and David Jordan, on Tuesday, Dec. 26. (Charlotte Boynton photo)

The breakfast menu will include, in addition to the traditional bacon and eggs, hot chipped beef and sausage gravy on biscuits. Tammy plans to bring back the Hunters Breakfast loaded hash and her own country fried steak. The former cook at Hunters Breakfast, Cindy Allen, will join the staff of The Cracked Egg.

The lunch menu will include homemade soups, sandwiches, and chowders. Daily specials will include pot roast, boiled dinner, turkey dinner, spaghetti, homemade baked beans, and much more, all at a reasonable price, with coffee included in the price of the daily specials.

Although John will not be doing any cooking, Tammy said he will be her right-hand man in managing the business. “There is no doubt she will keep me busy,” John said.

Other staff members for the opening will include Sherri Faulkingham, Kim Chapman, Jean Sherman, and Candice Chapman.

The Chapmans said they are thankful for the help of David and Jenny Jordan in painting the interior of the restaurant and preparing it for opening day.

Customers will definitely see a difference in the interior of the restaurant. Gone is the Hunters Breakfast theme of hunting, while new colors include “Uncertain Grey” walls and “Stolen Kiss Red” booths.

“We are looking forward to beginning our new business, the beginning of a new year,” Tammy said.