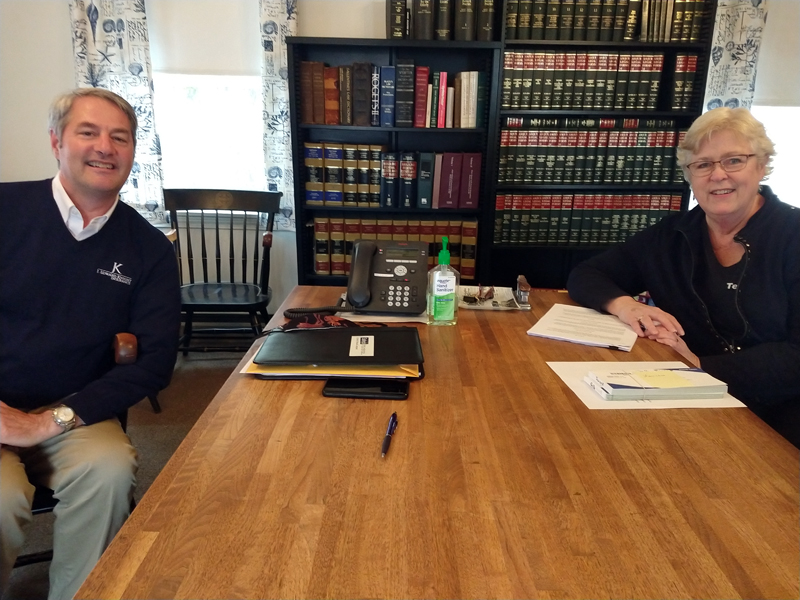 J. Edward Knight has offices in Bath, Boothbay Harbor, New Harbor, Rockland, and Vinalhaven, as well as the new office in Wiscasset. The firm’s history goes back to 1898, according to its website.

Sheila Sawyer owned the Larrabee Agency at the time of the sale. Former owners include some of Wiscasset’s most well-known residents of the past: Carl M.P. Larrabee, David B. Soule, and Roy Farmer.

Both the agency and its home, the Day House at 152 Main St., are part of the town’s heritage.

According to a 1991 profile in the industry publication Maine Viewpoint, Larrabee, an attorney, founded the Larrabee Agency in 1915. Soule, also an attorney, joined Larrabee’s law practice in 1954 and bought the insurance agency in 1961.

In 1953, Farmer, owner of a local real estate agency, bought the long-established Hawes Agency. The predecessors of the Hawes Agency dated back to 1857.

The Hawes Agency and Larrabee Agency merged Jan. 1, 1963, and Farmer and Soule bought the Day House from the Day family the same year.

Built by Manasseh Smith in 1797, the Day House was the first brick house in Wiscasset. It takes its name from a former owner, Dr. D.P.S. Day.

Sawyer, a native of Wiscasset, started working at the Larrabee Agency as a bookkeeper and officer manager in 1976. She didn’t know anything about insurance and credits then-owners Farmer and Soule for giving her an opportunity to learn the business.

When Soule retired in 1997, Farmer and Sawyer bought his share of the business. They were partners until Farmer’s death last year, at the age of 91.

Years ago, Farmer, Sawyer, and J. Edward Knight & Co. President Rob Wheeler, a native of Boothbay Harbor, decided that if the Larrabee Agency was to be sold, it would be sold to J. Edward Knight.

They made the decision to ensure the transition would work for their clients and employees. “Without either, we simply would not have been in business all these years,” Sawyer said.

Sawyer said that after more than 44 years in the business, she felt the “perfect time” had arrived for that transition.

“The Larrabee Agency purchase is a great fit for J. Edward Knight because our existing footprint fits in well with the Larrabee footprint,” Wheeler said in an email. “Sheila and I both have a similar philosophy concerning the importance of taking care of our clients and our team members. Knowing that was important to both of us makes the transition a win for both parties.”

The Wiscasset office will retain its name, Carl M.P. Larrabee Agency, but is now a division of J. Edward Knight.

The agency’s staff, Joan Barnes, Renee Bernier, and Trish Emmons, will stay on. Sawyer will work through the end of the year to ensure a smooth transition.

Wheeler said that although Sawyer will only work until the end of the year, she will always be an advocate for her clients and her staff.

Sawyer and her husband of 45 years, David, have three children: Jon, Jillian, and Robert, as well as four grandchildren, whom she adores.

She does not plan to retire anytime soon. The Sawyers own a mobile home park in Damariscotta and enjoy renovating homes together. Her husband is a plumber.

“I still have ownership in the office building and my partner and I are hoping to possibly do a project in the near future on the property,” she said. She owns the Day House with attorney William Logan.

She serves as treasurer of the Wiscasset Area Chamber of Commerce and secretary of the Wiscasset Academy High School Alumni Association – she will celebrate her 50th class reunion in 2021. Other involvements include the Cooper-DiPerri Scholarship Fund and the Wiscasset Female Charity Society.

She loves to spend time with her children and grandchildren, all of whom live in the area.

“David and I love to play golf and go camping. We hope to be able to take a little more time to travel, visit friends and relatives, and check out places on our bucket list,” she said.