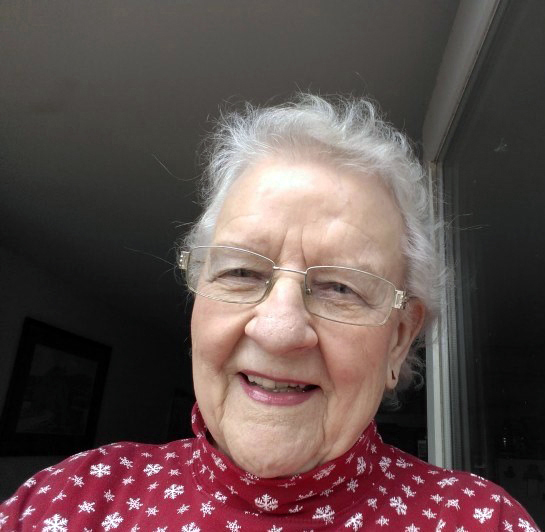 Janice Metcalf Fogg, a member of the Wiscasset Academy Class of 1950, made a New Year’s resolution to call her 10 surviving classmates twice a month to keep in touch during the isolation of the COVID-19 pandemic. (Photo courtesy Sheila Miller)

A member of the Wiscasset Academy Class of 1950 made a New Year’s resolution to call her classmates twice a month this year, after a year when the COVID-19 pandemic forced many into isolation and kept them from family and friends.

Janice Metcalf Fogg aims to see how each classmate is doing and update them on how their classmates are doing. She wants to make sure her classmates know they are all important to her and to each other.

The class had 25 graduates, 11 of whom are living. Fogg is the youngest member of the class and has kept in touch with her classmates for 70 years.

“We take pride in being the last and the largest class to graduate from Wiscasset Academy,” Fogg said. “We were a very close class, like brothers and sisters. We worked together for our school and our community. We were a class that was civic-minded, with most of the class staying in the area, making a difference in their community, and to their country.”

There were 13 boys and 12 girls in the class. Of the 13 boys, 12 served in the U.S. military after graduation. The 13th, Edward Grant, did not only because the military would not accept him.

His brother, Francis Grant, had died on the USS Turner when it exploded Jan. 3, 1944 while docked in New York Harbor. A 1948 law exempted from military service the sole surviving son of a family with another son or daughter who had died as a result of military service.

Although Edward Grant could not serve because of this law, his sister Shirley Grant (Hill), a member of the same class, followed in her older brother’s footsteps and joined the U.S. Navy.

During a 2013 interview, Hill discussed her time in the military. Her company appeared in the movie “Shirts Ahoy” in 1952. The star, Esther Williams, came to the base, where she marched and swam with the sailors while filming the movie.

Two members of the class, Robert Fairfield and Kenneth Sherman, returned to Wiscasset after their military service to start businesses.

The class offers a $250 scholarship each year to a graduating senior who is a descendant of the class.

Earl “Bud” Colby, class president all four years, called Fogg just before the class’s 50th anniversary in 2000 and suggested the idea. Colby, a U.S. Marine Corps veteran, was active in the American Legion and served as state commander in 1987. At the time of his death in 2002, he worked at The Lincoln County News. 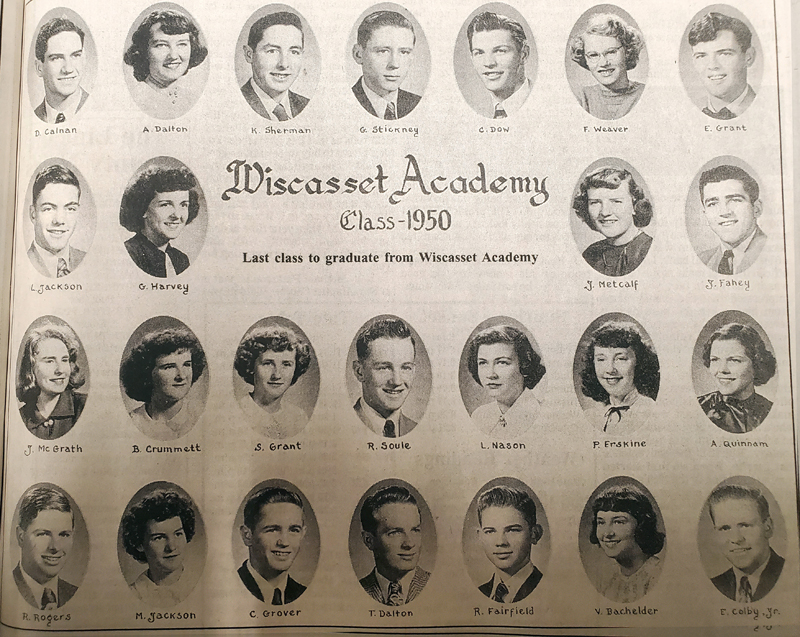 An advertisement in the June 1, 2020 edition of The Lincoln County News commemorates the 50th anniversary of the Wiscasset Academy Class of 1950.

Fogg holds the honor of being the first female reserve officer at the Freeport Police Department and one of four founding mothers of Freeport Community Services, which provides emergency relief services to community members in need.

Fogg remembers the generosity of her classmate Roland Rogers’ father and the late Frances Sortwell during the planning of the class trip to New York City. It was up to the class to raise money for the trip. In addition, each senior had to pay $25.

Frances Sortwell asked Principal I. Joseph Roy to have any student who could not pay the $25 come see her. According to Fogg, one student went to see Sortwell, who paid the student’s $25. In return, the student mowed the lawn at the Sortwell house all summer.

Roland Rogers’ father gave the class 100 live chickens for a chicken pie supper to raise funds for the class trip.

“It sounds like a lot of work, and it was, but we had a lot of fun working together,” Fogg said. “It is something the class will never forget.”

Classmates who have received Fogg’s calls have been pleased to hear from her.

When Richard Soule heard her voice, he said, “That is a voice from the past.”

When Fairfield got the first call, he was pleased to hear from Fogg and said he looked forward to the second call of the month.

Fogg, who is in quarantine until Friday, Jan. 29 because her husband, Merrill, is recovering from COVID-19, hopes an article about her resolution will inspire other people to do the same thing.

“In some cases we have shared 12 years of our lives with our classmates,” Fogg said. “I am sure other classmates in other classes would like to hear from one another, especially during this pandemic, when many are restricted from visiting family and friends.”