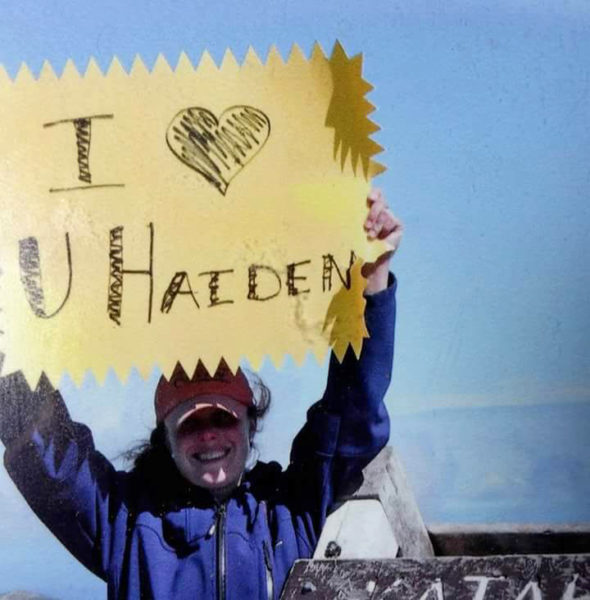 Joanne “Jojo” Russell lived a life of giving. In death, she continues to give life to others. Although her life ended at the age of 37, she lived her life to its fullest, making every minute of every day count for something, according to family members and her many friends.

Her life ended quickly and unexpectedly. She had a brain aneurysm during a 15-minute break from her job at Shaw’s Supermarket in Wiscasset. She passed away at Maine Medical Center in Portland on Dec. 6, 2016.

After her passing, family members, knowing she gave to people all her life, assumed she would want to continue giving. Their assumptions proved correct when they checked her driver’s license, which indicated that she was an organ donor.

A letter to the family from New England Donor Services shared the outcome of Jojo’s generosity to other people. Her right kidney and liver were successfully transplanted into a woman in her 30s who is now back home with her family.

The recipient of her left kidney, a man in his 70s, experienced complications and the kidney had to be removed. Although that was not the outcome hoped for, he was grateful for the second chance offered to him by the donor, according to the letter.

Tissue is needed to replace bone, tendons, and ligaments lost to trauma, cancer, and other diseases. The gift of skin is used for reconstructive surgery after a mastectomy, to promote healing and to improve mobility of the shoulder and arm, according to New England Donor Services.

In addition, Jojo’s heart valves and corneas were recovered. In many cases, cardiac tissue is used to benefit children with complex heart defects, as well as adults with heart disease. Surgical procedures using donated cardiac tissue enable many patients to enjoy an improved quality of life. Donated corneas can be used to enhance vision or restore sight for the visually impaired.

Margie Hodgdon, of Westport Island, who is also an organ donor, was her sister’s co-worker at Shaw’s and was there the day her sister had an aneurysm.

“It all happened so fast,” Hodgdon said. “Our lives changed in a 15-minute break, but there is a comfort to know that something good came out of our pain.”

Hodgdon said she will never forget the last words Jojo said to her before she left for her break. “She said, ‘Sissy, will you buy me a pack of cigarettes? It is the last thing I will ask you for.’”

Hodgdon said there is no doubt her sister would have wanted to help others.

“She was giving all her life. She was a collector of people,” Hodgdon said. “She was always so energized. She would go out of her way to help anyone, to visit people when they were sick. She just never stopped caring for others.”

Jojo was the youngest of six children. She had three brothers, Edward, Samuel, and Peter; and two sisters, Dorothy and Margie. At the time of her death, she was living with her brother Edward and his family in Alna.

According to Hodgdon, before Jojo left for work the morning before she had an aneurysm, she told her brother’s grandsons that when she came home from work, she would build a snowman with them.

Because she was not there to help make the snowman, the boys decided to make the snowman for her. “She left an lasting impression on everyone she met, regardless of age,” Hodgdon said.

According to Hodgdon, Jojo was very creative. She loved to make crafts and give them away. She would make bowls by melting old records, and coat hangers from driftwood.

She was always willing to tackle anything. “She was full of energy. She never stopped,” her sister said.

One of Jojo’s brothers, after her death, said perhaps people are given so many steps in life, and Jojo used her steps up in 37 years.

“People loved her. She sold hot dogs in Bath at Roger’s Hardware, and people would give her $10 for a hot dog,” Hodgdon said. “Whatever she was doing, whether it was digging potatoes, cleaning house, waitressing, and especially (working) at the deli at Shaw’s, she was happy, and made everyone else happy. She treated everyone like they were her best friend.”

Wiscasset resident George Green, of North of the Border on Route 1 in Wiscasset, said she was a ray of sunshine when you walked into Shaw’s. “You could come in the store a little down, and her smile and ‘good morning’ would brighten your day,” he said.

Her creativity was recognized at a young age. According to Hodgdon, when she was very young, Jojo would put on clothes that might not ordinarily go together. Their mother would call Jojo “Gypsy Rose.” However, as she became older, it was clear she had a knack for fashion. Their mother passed away in 2008. After her death, when Jojo would assemble an outfit, she would ask, “What do you think Mom would say about this?”

Hodgdon said Jojo loved spending time with her son, Haiden. He was the great joy in her life. She once climbed to the top of Mount Katahdin with a friend, and when she got to the top, she held up a sign telling Haiden that she loved him.

Erin Macomber, aftercare coordinator for New England Donor Services, wrote in a letter to Jojo’s family, “You and your family reached beyond your pain in a moment of tragedy to consider the needs of others. I cannot think of a more loving tribute to your sister.”

According to the New England Donor Services website, there are about 120,000 men, women, and children in the United States waiting for a lifesaving transplant. More than 5,000 live in New England. Every 12 minutes, a name is added to the national waiting list. An average of 22 people die each day waiting for a transplant.

One healthy organ donor can affect the lives of 75 people over a period of up to 10 years, according to New England Donor Service.

“We know this is what Jojo would want: to give the gift of life,” Hodgdon said.