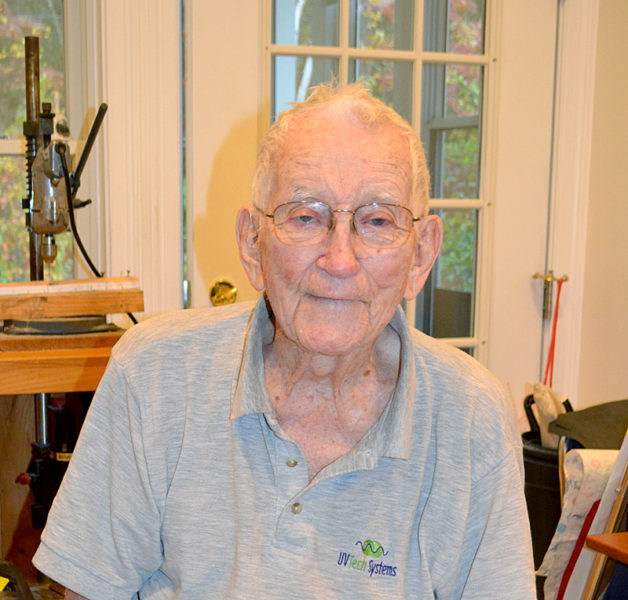 World War II veteran George Whitten, of Boothbay Harbor, built bridges during the war, built houses when he returned home from the war, and is still keeping busy, at the age of 93, making things that are useful to society.

“I gave up my construction business in the 1980s, but I am never going to retire,” Whitten said in a recent interview. He and his wife, Naomi, about six months younger than he is, said they live life to the fullest, enjoying every hour of every day. They are both early risers but enjoy staying up late if there is a good ball game on, such as game seven of the World Series, which went into extra innings and had a rain delay.

Whitten received the Bronze Star for meritorious achievement during the Battle of the Bulge. He is proud of his service to his country, and thankful for a long life that allows him to continue giving.

Whitten was born Oct. 16, 1923 in Foxborough, Mass. He was a Boy Scout, and credits the organization for the survival training that helped him during his military career. When he was a senior in high school, his family moved to Winchester. Shortly after graduating from high school, he was drafted. 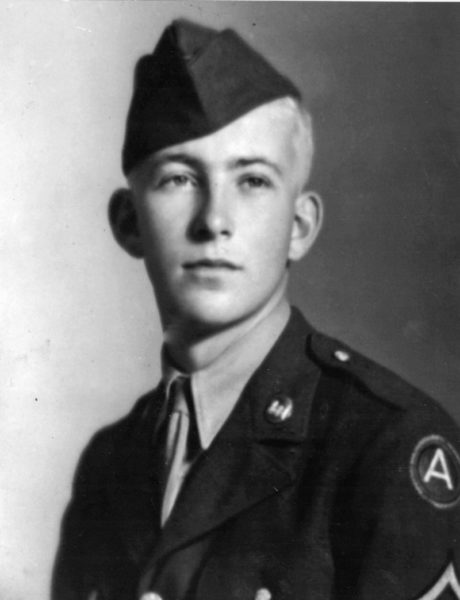 A 19-year-old George D. Whitten in 1943, the year he was drafted into the U.S. Army. (Photo courtesy George Whitten)

On June 12, 1943, he became a member of the U.S. Army and found himself on his way to Camp McCain in Mississippi for basic training. As part of his basic training, he went on maneuvers in the swamplands of Louisiana.

During the maneuvers, Whitten said he used his Boy Scout training to build a bed of tree branches to keep himself off the cold, wet ground. His lieutenant, who Whitten served with throughout most of his military career, took the bed for his own use.

“The lieutenant and I never saw eye to eye. I don’t think he liked me, maybe because I had a higher IQ than he did,” Whitten said with a chuckle.

In November, while still in training at Camp McCain, one of his officers, from Winchester, Mass., asked Whitten to drive him home. Whitten said the officer was going overseas, and wanted to take his car home. After driving his officer to Winchester, Whitten took a train back to Mississippi. Because of that trip, Whitten’s combat career was delayed, because his troop was sent to participate in the D-Day invasion while he was gone.

In August, two months after D-Day, Whitten landed on Utah Beach in France and his combat career began. Whitten said his unit fought its way across France on its way to Germany.

Whitten said he will never forget one experience from this time. He and about five other soldiers were in a boat paddling up the Sure River. A mortar shell hit the boat and every man except Whitten was either killed or wounded. “I didn’t even get a scratch,” he said.

Whitten was assigned to a combat engineering group as a explosives expert, though while in combat a soldier does what has to be done, he said. “I manned a machine gun when we arrived at Heiderscheidergrund, Luxembourg,” he said. His company dug a foxhole in the front yard of farmer’s house, looking down on a bridge over the Sure.

Whitten said the farmer came out and offered he and his two buddies a drink of schnapps. “We took a shot – just a sip because we were on duty,” Whitten said. “I asked him how many children he had. He told me three. I gave him three peppermint patties that had been sent to me from home, and three oranges I collected from my buddies, for his children.”

A few minutes later, the farmer came out and invited Whitten and his buddies to his home for Christmas dinner. Whitten said they asked the lieutenant for permission to accept the invitation and he said it was OK.

“It was the best Christmas dinner I ever had, or will ever have,” Whitten said. The menu included rabbit and vegetables that had been canned earlier in the year.

The Battle of the Bulge began Dec. 16, 1944. It was the last major campaign of the Germans during World War II, and Luxembourg was on the western front of that campaign, which ended Jan. 25, 1945.

The Germans had bombed the bridge over the Sure at Heiderscheidergrund, which is on the road to Bastogne. Whitten’s company (Company A 166th Combat Engineers) was chosen to erect the bridge. Because of heavy fire from the Germans, it was decided to build a bridge made of treads, or movable sections. According to Whitten, the Canadian army was trapped on the other side of the river unable to get across.

The lieutenant said he was gong to wait for lumber to come from the depot before going forward to build the bridge.

Whitten told his lieutenant he could build the bridge without the lumber, but according to Whitten, the lieutenant told him to shut up and said he was sick and tired of him.

“We had known each other for a year and a half. He was my original platoon leader, and it was known around the outfit that I had the brains and he the stars,” Whitten said.

Whitten held the rank of technician fifth grade. Those who held this rank during World War II were often called tech corporals.

“I asked a truck driver from another outfit to help me, who could not be court-martialed for disobeying orders, instead of waiting for hours for the lumber blocking,” Whitten said. The truck driver said, “Gladly, soldier.”

The two men placed the first treat and were ready to place the second when Whitten told the truck driver they had better awaken the Canadian infantry, which was waiting on the other side to come across. According to Whitten, they came across on foot, playing bagpipes, and protected them from the Germans so they couldn’t get to them when they put the second tread in place that completed the bridge for the waiting tanks to cross.

When they put the last section down, the truck driver did not hear Whitten and put it down on Whitten’s foot. They had to get a crowbar to lift the tread so he could get his foot out.

The lieutenant came out and said, “I’m going to court-martial you for disobeying orders,” but according to Whitten, the captain said, “The hell you will.”

Whitten was awarded the Bronze Star for his work on the bridge. According to the citation, heavy and accurate enemy artillery fire was endangering Whitten and 12 other men. Through Whitten’s leadership, the construction time for the bridge was greatly reduced. Despite being pinned between a tread and the road at one point, he kept his cool.

“Whitten’s voluntary acceptance and utter disregard for personal danger are in the highest tradition of the military service,” according to the citation.

Whitten remembers one day when he was about 7 years old he was playing on the floor with a toy truck and heard his father say, “You don’t have to worry about George; someday he will build bridges.”

While still in or around Luxembourg, Whitten, still a technician fifth grade, was at a crossroads directing traffic when he suddenly heard the sound of German storm trooper boots coming. He looked and saw about 50 SS soldiers approaching over a hill. He said to himself, “This is it for me.”

Instead, the commander of the German soldiers said, “We are here to surrender to you. We do not want to be taken by the Russians.” Whitten said the German colonel spoke very good English. He was a graduate of the University of Oxford in England.

Whitten said he told the colonel his men should remove their weapons and place them in a pile so the American forces would know they were surrendering.

The colonel instructed his men to do so. Whitten said that about that time the military police came along and took the German soldiers into custody.

“I was some relieved,” Whitten said, “because when I saw them coming over the hill, I thought my life was going to end.”

Whitten said he remembers playing craps while coming home on a ship. He won $750 to buy his girlfriend an emerald ring.

After being discharged from the Army, he attended Tufts University in Medford, Mass., and later started a successful construction company in Winchester called Whitten Bros., where he employed about 150 people. He built about 7,000 houses during his professional career.

He said he had been coming to Boothbay Harbor with his family since he was 9 months old,  and after closing his construction business in 1989, he decided to settle there.

He and Naomi now spend their days making crafts. They make custom notepads and notebooks, and from the scraps they make small gift boxes. This past Halloween they made small boxes filled with candy for the trick-or-treaters.

Whitten said they are not making the crafts for money, but because they like to keep busy. They have donated about 500 notepads to Togus, the U.S. Department of Veterans Affairs facility in Augusta, and their work is sometimes available at local craft shows.

Whitten said he is very thankful for his long life and intends to continue putting it to good use, enjoying every minute of it with his wife and his three children, three grandchildren, one great-grandchild, and many friends.