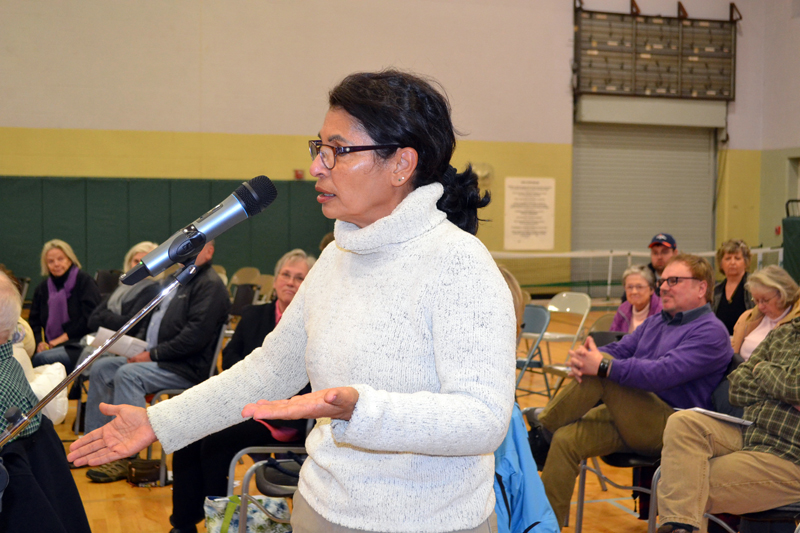 Wiscasset resident Claudia Sortwell speaks during a public hearing about the town’s upcoming referendum to determine if it will continue a lawsuit against the Maine Department of Transportation. (Charlotte Boynton photo)

About 100 people attended a public hearing at the Wiscasset Community Center on Tuesday, April 3 regarding Wiscasset’s upcoming referendum vote on whether to continue a lawsuit against the Maine Department of Transportation.

On April 17, voters will decide whether the town should continue the lawsuit in an effort to force the DOT to comply with town ordinances and reconsider the removal of on-street parking.

For nearly two hours, Wiscasset residents and business owners spoke on the issue, some in favor of going forward with the lawsuit and some in support of the DOT project.

Several speakers asked questions of the selectmen and their legal counsel present at the meeting, attorneys Peter Murray and Sage Friedman.

Wiscasset resident and business owner Brad Sevaldson said Wiscasset Thinks Forward, a group of businesspeople and residents, has retained the law firm of Moncure & Barnicle P.A., which will file a motion to intervene as defendants in support of the DOT.

Sevaldson said the group believes the town’s legal action will result in permanent damage to the town, the residents, and businesses.

Those in favor of the lawsuit criticized the DOT for making changes to the Option 2 project selected by voters. The DOT turned away from federal funding for the project, which would have required it to comply with federal standards and local ordinances.

The removal of 54 on-street parking spaces downtown would destroy Wiscasset businesses, thus causing Wiscasset to become a ghost town, according to those in favor of the lawsuit.

Advocates of the lawsuit also said the cost of the lawsuit would be paid by a group of business owners and residents, and would not come from taxes, though the town has not indicated whether it would accept such an arrangement.

Other concerns focused on the potential damage from the project to the town’s historic landscape. 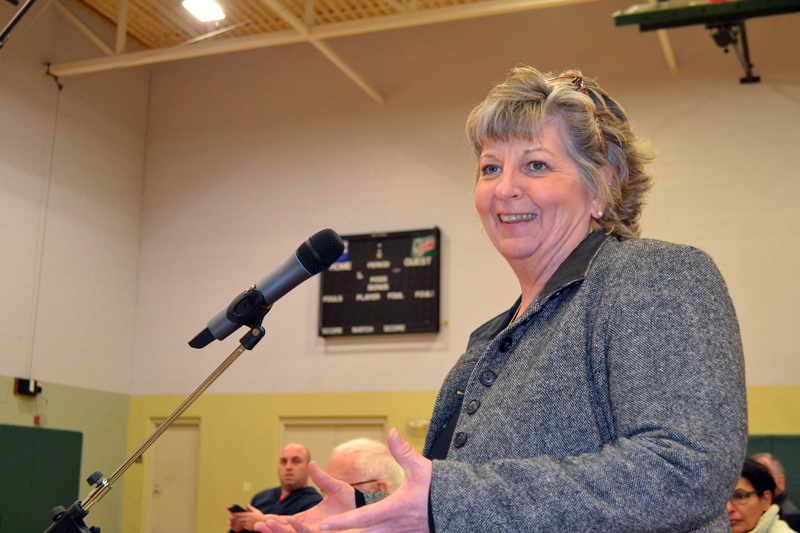 Wiscasset business owner Patty Averill tells attendees of the public hearing to be happy, as the town will get through the issue. (Charlotte Boynton photo)

Ralph H. Doering III, a downtown building owner who has offered to fund the lawsuit himself, addressed the matter in a March 19 letter to town officials.

“We see Wiscasset as a quintessential Maine coastal town,” Doering said in the letter. “Its history is worth protecting and its laws are worth protecting. These are the motives of the Doering family. Therefore, we make this decision as a family. We are planning on paying for the town’s litigation cost in the (DOT) matter. I cannot state this any more plainly.”

The selectmen were asked if the town or its legal counsel have signed any document to accept funds to finance the lawsuit.

The selectmen were also asked for their thoughts regarding the offer of funds to pay for the lawsuit. The selectmen agreed the question would be put before the voters before the town would accept any funds.

The selectmen were asked a couple of times if they have set a cap on the cost of the lawsuit. Colby said the selectmen have not discussed a limit on the cost.

A representative from the Maine Historic Preservation Commission requested to speak, but was denied. The selectmen had voted at the beginning of the meeting to only allow Wiscasset business owners to join Wiscasset residents in speaking during the public hearing.

Some of those who oppose the lawsuit said even the town’s attorneys do not believe they would be successful, and it would be like throwing money down the drain regardless of where it comes from. 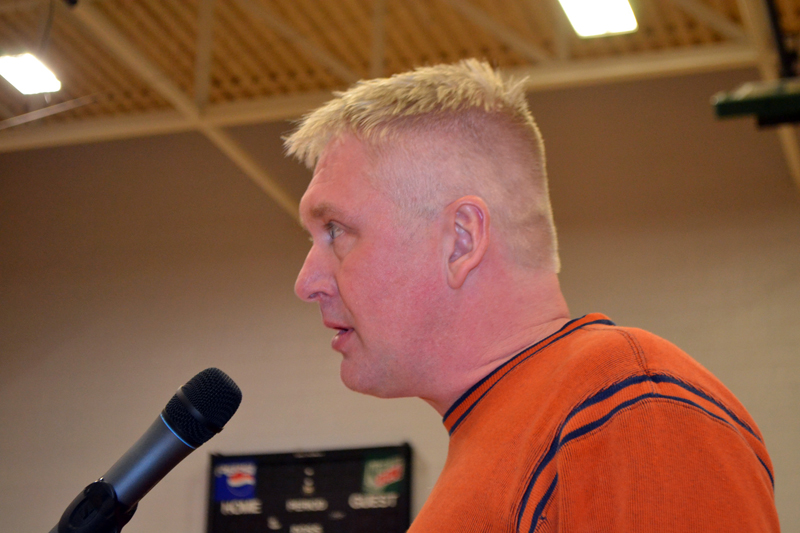 Wiscasset resident Mikael Andersson suggests that the town take the money it would spend on a lawsuit and spend it on beautification instead. (Charlotte Boynton photo)

Murray asked to address the comment. He said he believes the town has a strong case, although he cannot guarantee the town would win.

Residents in support of the DOT project said the department is working to make Main Street safe for pedestrians and vehicles. The sidewalks would be handicapped-accessible and safer to walk.

The work the DOT is planning would otherwise cost the town hundreds of thousands of dollars. Some said the work on Main Street would enhance the historic character of the town.

Wiscasset resident Sherri Dunbar, a local real-estate agent, said she is concerned for the town. She has shown a piece of commercial property in Wiscasset several times, and no one has made an offer yet because of the uncertainty surrounding the DOT issue. “Change is not always a bad thing,” she said.

Wiscasset resident Mikael Andersson made his first comment on the DOT issue at the public hearing, suggesting that the town take the money it would spend on a lawsuit and spend it to make Wiscasset even more beautiful than it already is.

Claudia Sortwell, speaking in favor of the project, brought laughter from both sides when she told the group it was good to walk, and men should sit in the car and let the women do the shopping. She said she has observed the shopping behavior in Freeport and Portland and discovered that women are the shoppers, they like to walk, and it is good for them.

Patty Averill, owner of Pat’s Barber Shop in Wiscasset, told the group, “We are going to get through this one way or the other, and either way I am still going to be here.”

Another resident asked why they were even voting on a lawsuit, when the voters already approved the project. “Didn’t my vote count?” he said.

Former Selectman Judy Flanagan asked Murray what the DOT would do if the town wins the case. Murray said he believes the DOT would come back and work with the town.

Colby did not close the meeting until everyone had an opportunity to speak, some more than once.

Before adjournment, Selectman Katharine Martin-Savage encouraged everyone to vote regardless of whether they are in favor of the lawsuit or not. Everyone’s vote counts, she said.