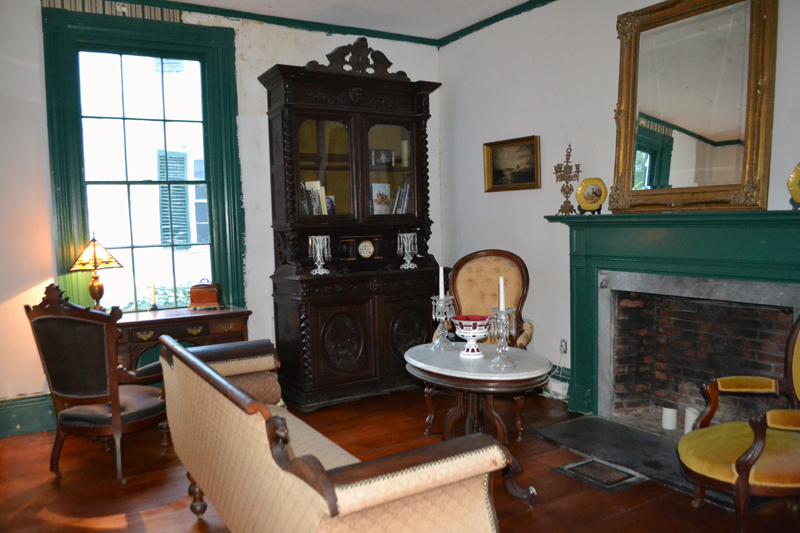 The new owners of the former Musical Wonder House in Wiscasset plan to use satin-finished wallpaper on the walls of the library. (Charlotte Boynton photo)

Three business partners are restoring the former Musical Wonder House, on High Street in Wiscasset village, to its past grandeur.

Michael Collins and Dana Long, from South Carolina, and Dan Dyer, from Waterville, bought the property in January.

During an interview, they expressed a strong interest in historic preservation and their love for the town of Wiscasset.

“Wiscasset is a treasure for its history and its tranquility, a picture-perfect town,” Collins said.

During a visit to Wiscasset in early 2017, the trio saw the Musical Wonder House was for sale. They learned the history of the house and made an offer, but withdrew it the next day, intimidated by the amount of work the old home would need.

Collins recently had surgery for cancer. After the surgery, he asked his doctor if he was cancer-free and the doctor said he was. The next thing he did, after hearing he had another chance at life, was consult his partners about buying the house.

The rest is history: they purchased the house in January and began working to replace the plumbing, the electrical wiring, and the roof, and to renovate and remodel the interior of the home, which had fallen into disarray.

Before beginning the repairs, the new owners invited their friends to see their new home.

Half of their friends asked them if they had taken leave of their senses. The other half, who shared their enthusiasm for historic homes, congratulated them on their foresight in the purchase.

Although they purchased the home in January, it was not ready for occupancy until June. The first two weeks after they moved in, they had no running water.

When a friend from South Carolina called and asked how things were going in their new home, Collins told her it was a great feeling to know they were living like Abraham Lincoln lived.

When he told her they had been living without running water for the past two weeks, she asked, “How do you take your baths?” Collins said, “Just like Lincoln did, with a large basin of cold water, soap, a face cloth, and a towel.”

Collins, Dyer, and Long owned a home in Portland, where they lived before moving to Wiscasset. Their Portland home sold shortly after it was put on the market. They began moving their antique furniture to their new home when repairs and renovations permitted.

Over the past few months, they have installed new hardwood floors to replace those with water damage from a leaky roof, sanded floors that could be saved, painted walls and ceilings, and decorated the home with mid-19th-century furniture. The house was built in 1852.

“There is no new furniture in this house,” Collins said. “The only things that are new are the appliances.”

“What would be the sense in having this beautiful furniture and not using it?” he said.

The full restoration will take time. “We worked seven of the last 12 years on our home in the Portland area,” Long said. “It will take at least another seven years here.”

They plan improvements to the grounds as well as the building, including an English Colonial garden in their backyard with a cobblestone driveway where they will park a horse carriage, currently in the backyard.

Captain William Clark built the home that would become the Musical Wonder House in 1852. Clark built it as a two-family house with identical sides: one for him and his wife, and one for his daughter.

In 1913, Clark’s son-in-law took down the wall between the sides and united the building into one home. According to Collins, the ownership of the home stayed in the Clark family until 1962, when Danilo Konvalinka bought it.

Konvalinka’s Musical Wonder House, a museum and repair shop for antique music boxes and player pianos, opened in 1963 and operated through 2014, when its collection was liquidated and the house went into foreclosure.

Collins, Dyer, and Long were able to acquire two pieces that were once in the Musical Wonder House collection: a music box they found at Christie’s Auction House in New York, and a piano from the Fairfield Antique Mall.

“It is the piano that came home,” Collins said. When they saw the piano in Fairfield and decided they had to have it for their new home, they didn’t know it had a connection to the home.

The driver who delivered the piano told them he had removed it from the home. When they told the driver where to put the piano, the driver looked at them and said, “This is the room I took the piano from.”

“I got goose bumps when he told us that,” Collins said.

The new owners said they consider themselves fortunate to have the opportunity to restore the home and preserve it for future generations. “It truly is a gem,” Collins said.

Collins said owners of historic homes in Wiscasset should consider offering tours of their homes and gardens to raise money for the preservation of the town’s history. He said he would like to see horse-drawn carriage rides for visitors to shop and see historic sites, with Christmas carolers on the street corner at Christmastime.

The new owners have a nickname for their new home. They call it Miss Scarlett, after the character in the classic film “Gone with the Wind.” The 1939 Civil War drama focuses on a Southern belle, Scarlett O’Hara, played by Vivian Leigh.

Although they say Miss Scarlett is taking up lot of their time, along with Wild Burritos, the trio has more plans for Wiscasset: they aim to open the Village Tavern on Main Street before Christmas.