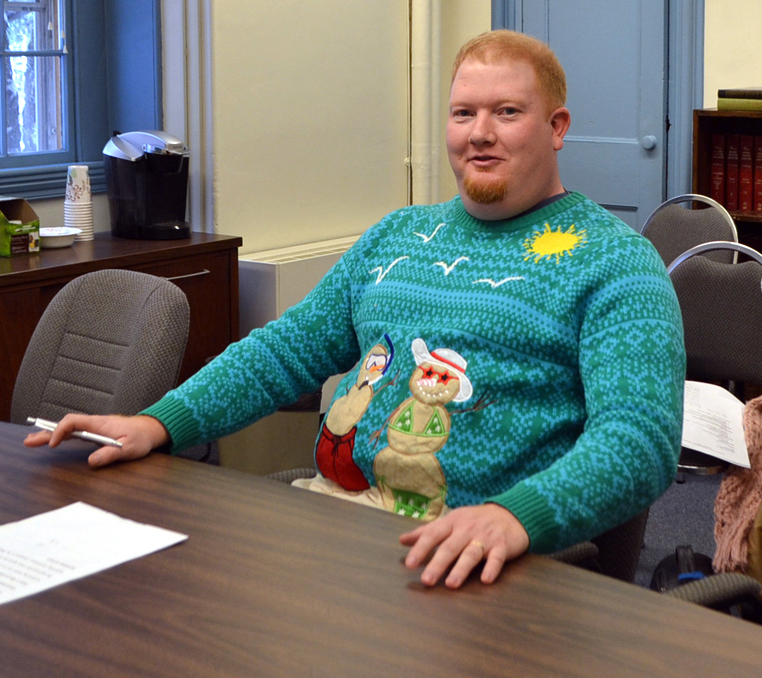 Lincoln County Emergency Management Agency Director Casey Stevens wears a Christmas sweater to a meeting of the Lincoln County Board of Commissioners on Tuesday, Dec. 19. “I have to wear this sweater at least one time during the Christmas season,” he said. (Charlotte Boynton photo)

The budget includes funds for an additional sheriff’s deputy to address traffic issues at a cost of about $70,000.

Lincoln County Sheriff Todd Brackett reported the population at Two Bridges Regional Jail was 157 inmates as of Tuesday, Dec. 19. The figure includes 37 from Lincoln County, 33 from Oxford County, 29 from Penobscot County, 28 from Waldo County, 23 from Sagadahoc County, three from Cumberland County, two federal inmates, and one each from Knox County and Somerset County.

Sheriff’s Deputy John Braley has submitted his resignation effective Dec. 29. According to Brackett, Braley has accepted a position with the Boothbay Harbor Police Department.

The county received and opened bids for new soft and hard body ballistic armor vests for the sheriff’s office. The commissioners did not award a bid, instead tabling the matter until Brackett reviews the bids.

The sheriff’s office is seeking a grant of up to $425,000 from the federal Substance Abuse and Mental Health Services Administration to treat inmates for addiction, both during and after incarceration.

According to Brackett, the grant is very competitive. “It is a long shot. We have as good a chance as anyone,” he said.

According to Stevens, the high school plans to use its cafeteria and gymnasium as a shelter if necessary. Stevens will meet with representatives of the school to help develop its plans.

According to the commission’s website, it monitors and evaluates the state’s fire-protection services and provides recommendations to the appropriate state agencies and to the Legislature regarding necessary changes. 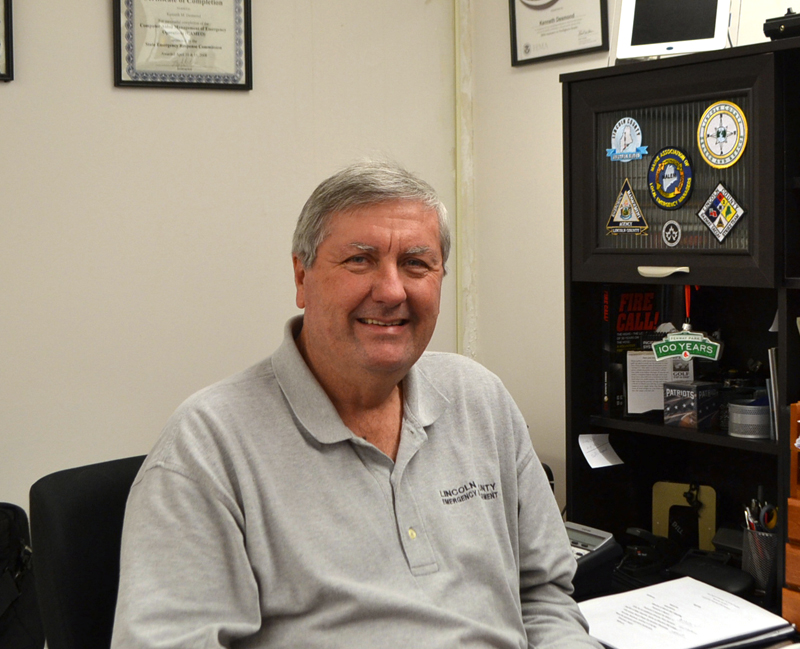 The appointment will not interfere with Desmond’s duties with the county, according to Stevens.

Lincoln County Administrator Carrie Kipfer told the commissioners she, along with Brackett,  attended a meeting with the Maine Department of Corrections in Augusta on Dec. 11. A topic of discussion at the meeting was funding from the state for county jails.

According to Kipfer, the Maine County Commissioners Association and the Maine Sheriffs Association sent a clear message in a prepared statement that the counties need funding.

“Our voices were heard,” Kipfer said.

The county will have a five-year maintenance agreement with Cummins Sales and Services for the generator at the courthouse at a total cost of $5,501.52. Kipfer recommended the five-year contract, which will save the county about 45 percent in comparison to a one-year contract.

Kipfer also updated the commissioners on an employee health reimbursement account, which will become effective Jan. 1.