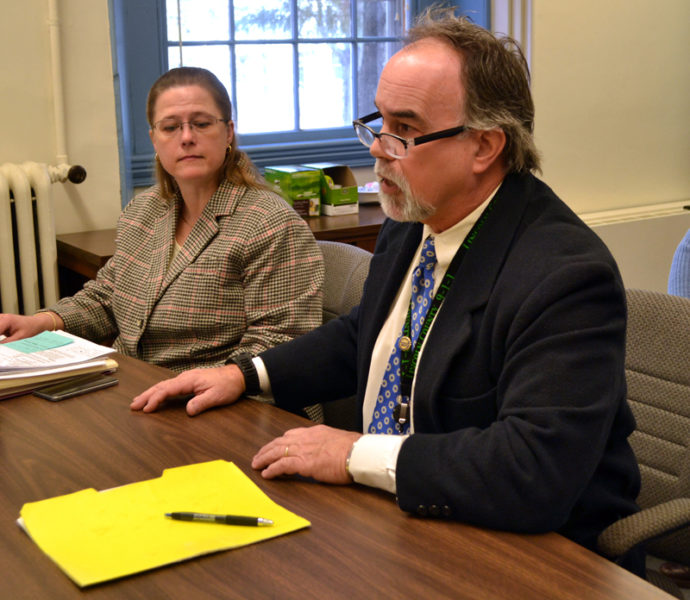 Lincoln County Communications and Emergency Management Agency Director Tod Hartung will step down Jan. 31 after four-plus years in the position.

Hartung’s decision comes as the county advances a plan to split the positions of communications director and emergency management agency director into two full-time positions.

Hartung did not apply for either position. His current job will end Jan. 31.

Hartung told the Lincoln County Board of Commissioners at its meeting Tuesday, Jan. 17, that under the circumstances, he felt it was best for everyone, including himself, to step back from the transition process and move on.

The commissioners thanked Hartung for his service to the county.

“Thank you for serving in that position,” Commissioner William Blodgett said. “You have been a bright and shining face around here.”

Hartung thanked the commissioners and the county administrator for their support and the opportunity to serve the county. He also spoke approvingly of the decision to split his position. “It is something that should have been done a long time ago,” he said.

During the budget process, in October, Hartung presented the draft budgets for each department to the Lincoln County Budget Advisory Committee. The committee and the commissioners later approved the budgets. The commissioners have approved job descriptions for both positions.

The county advertised for both positions internally and externally, according to County Administrator Carrie Kipfer. The county has received many applications and interviews are in process, she said.

According to Brackett, the county sent out seven requests for bids for a van, which it will use to transport inmates. The county received four bids.

Although the bid from Newcastle Chrysler was not the low bid, Brackett recommended it because, in his opinion, it was the best deal.

The commissioners also renewed contracts for shellfish warden services with the towns of Bremen, Bristol, and South Bristol. Contracts with Damariscotta and Newcastle are outstanding, but expected at any time.

In addition to the five shellfish contracts, the county contracts with 11 towns for animal control services.

The population at Two Bridges Regional Jail as of Tuesday, Jan. 17 is 170 inmates: 40 from Waldo County, 37 from Oxford County, 34 from Lincoln County, 31 from Sagadahoc County, 21 from Kennebec County, two from the federal government, one from the state, and one from Cumberland County.

The bid was awarded to Bath Savings. The county will draw money on an “as needed” basis.

After a brief discussion, the commissioners voted to meet with the county’s legislative delegation at Two Bridges at 8 a.m., Tuesday, Jan. 31.

The commissioners asked Kipfer to contact local legislators and ask them to attend.

The commissioners accepted Kipfer’s recommendation to hire Pamela Perry as a bookkeeper for the treasurer’s office. Perry will replace Mary Stacy, who recently retired after more than 37 years with the county.

The county received a letter from The Friends of Colonial Pemaquid thanking the commissioners for their support in the nonprofit’s effort to obtain a lease to manage the Colonial Pemaquid State Historic Site. According to the letter from President Don Loprieno, the group is not discouraged about its pursuit of its goal, though it will take longer to achieve.

The guidelines being set by the governor require much of the proceeds from Colonial Pemaquid to go back to the state. The Friends would have to rely on admissions as the only source of revenue, with 40 percent of admissions being set aside for capital projects and shared with the state, according to Loprieno’s letter.

Loprieno asked the commissioners to share his letter with the legislative delegation at their upcoming meeting.