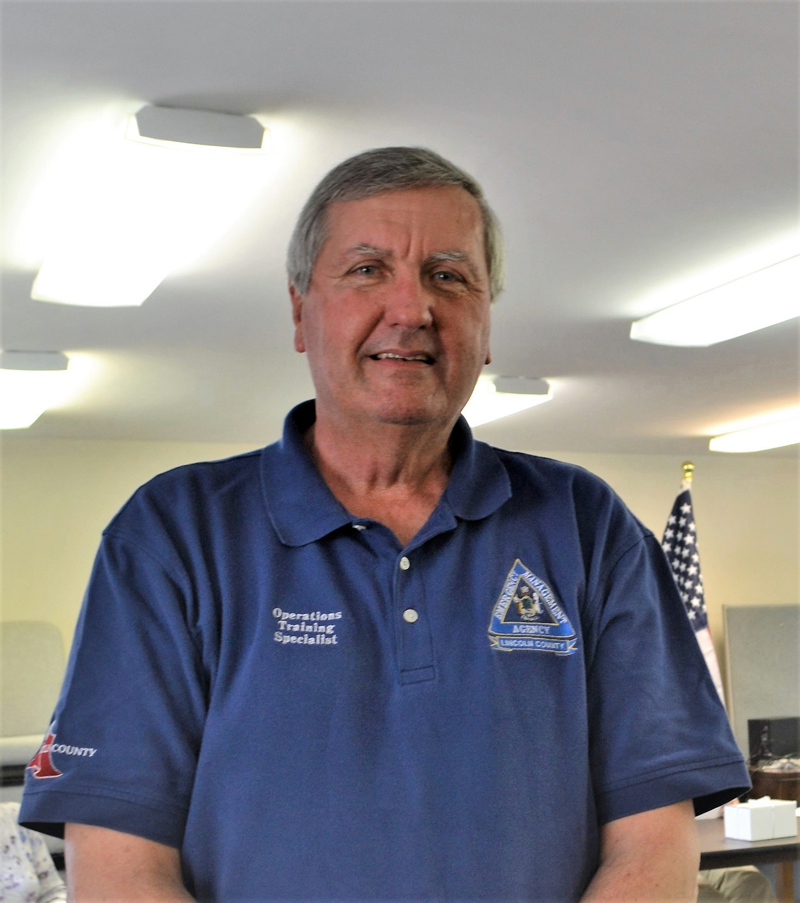 Kenneth Desmond, a training and operations specialist at the Lincoln County Emergency Management Agency since February 2007, retired effective April 29 after more than 50 years in emergency services.

Desmond announced his retirement to the Lincoln County Board of Commissioners on April 20. The commissioners thanked him for his service and accepted his resignation with regret.

Desmond graduated from Winslow High School in 1968 and joined the Winslow Fire Department in 1970. He served with Winslow until 1986, then on the Chambersburg (Pennsylvania) Fire Department until 1988.

Over the years, he has continued his education in fire science, including training in fire department administration and management; fire investigation; and the fundamentals of fire prevention. He also has training as an emergency medical technician.

From 1988-2005, Desmond worked for the Bath Fire Department as a training officer, fire safety education officer, and incident commander. He then served two years as Woolwich’s fire chief, EMA director, and code enforcement officer before coming to Lincoln County in 2007.

Stevens said that Desmond’s duties have far exceeded his job description as training and operations specialist.

“Ken has a lot of experience, is always willing to share his experience, and continues to train to gain additional skills and knowledge of emergency management,” Stevens said.

Desmond responded to the fire at the Washburn & Doughty shipyard in East Boothbay in 2008, a windstorm that wreaked havoc across the county in 2017, and the COVID-19 pandemic in 2020 and 2021.

“He was always willing to do whatever needed to be done,” Stevens said. “He was a team player in any emergency. I could always count on Ken to get a job done.”

Desmond has played a major role in the county’s response to the pandemic, according to Stevens, who called it the largest and longest emergency in 100 years.

In 2020, Desmond delivered more than 10,000 pieces of personal protective equipment and fitted 650 masks for health care workers and first responders in Lincoln County.

Desmond also assisted the county in distributing food to families on Monhegan during the pandemic.

Deputy EMA Director Melissa Temple said that although Desmond has extensive experience in emergency services and a willingness to help however he can, he has somewhat less capacity when it comes to computers.

Temple said she served as his personal “information technology person” at the office. Whenever she helped him with his computer, he would say, “Thank you, and just add it to my bill.”

“I have been adding to his bill for five years,” Temple said with a smile. “I doubt if he plans to pay me. That really doesn’t matter — I will still offer my services when he retires if he needs me to fix his computer.”

The county will advertise the position, but Stevens and Temple said Desmond cannot be replaced personally or professionally.

“We are very thankful for Ken’s contribution to Lincoln County EMA and wish him the best for his retirement. He will be missed by many,” Stevens said.

Jefferson Fire Chief Walter Morris said he will miss Desmond too, calling him a tremendous asset to the county for his knowledge and ability to teach emergency response and hazmat training.

Morris said he wishes Desmond well and hopes he will continue to share his knowledge with the county.

Former Bristol Deputy EMA Director Tony Norman also shared memories of Desmond. Norman has known Desmond since 1978, when they both served on the Winslow Fire Department.

Norman remembers Desmond telling a class they were teaching that between the two of them, they had 100 years of firefighting experience. He said Desmond has been a good advocate for fire departments working together through the mutual-aid system.

Desmond said he is looking forward to retirement and traveling with his wife, Robin, to visit his children and grandchildren in Florida. He has three children and nine grandchildren, including a set of triplets. He also plans to spend some time golfing.

Desmond said he will remain active as volunteer state director of the National Volunteer Fire Council and in volunteer work with the Maine Fire Protection Services Commission, the New England Association of Fire Marshals, and other organizations.