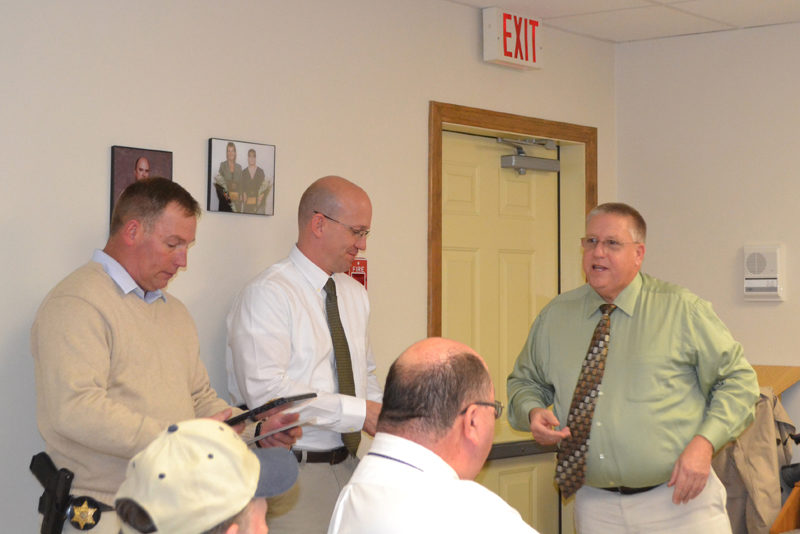 Chief Deputy Ken Mason and Sgt. Jason Nein, of the Lincoln County Sheriff’s Office, are moving on to the next journey in their lives: Mason to become the sheriff of Kennebec County and Nein to become an investigator at the Secretary of State’s Office in Augusta.

Lincoln County officials expressed their appreciation for Mason and Nein’s service during a farewell luncheon in the conference room at the Lincoln County Communications Center in Wiscasset on Wednesday, Nov. 30.

The event was not just a party to wish the two officers well, it was also an opportunity for the county to show its appreciation for both men’s service and dedication during their time at the sheriff’s office. Nein served with the sheriff’s office for 26 years, and Mason as chief deputy for 12 years.

Sheriff Todd Brackett took a trip down memory lane with stories about both men, often bringing some concern from Mason and Nein as to what the sheriff was going to share.

Brackett said he has known both men for many years. He met Mason when both attended the Maine Criminal Justice Academy as young officers and the two have remained friends ever since.

“The rest is history. He accepted the position and has done an outstanding job. He will be very much missed in the department,” Brackett said. “I felt like a proud papa when he decided to run for sheriff of Kennebec County, and even prouder when he was elected.”

Brackett said he has known Nein since he was a high school student, long before Nein became a teller at the First National Bank or a sheriff’s deputy.

“He will be missed as a member of our management team,” Brackett said. “His accident reconstruction skills are recognized throughout the state.”

Brackett said he was happy to report that although Nein will be working in Augusta, he and his family will stay in Lincoln County. 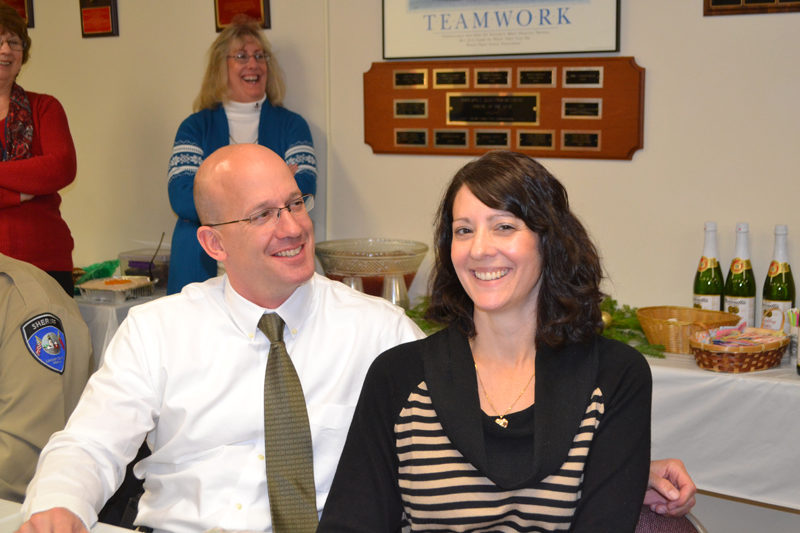 Lincoln County Sheriff’s Office Sgt. Jason Nein and his wife, Michelle Nein, smile as Sheriff Todd Brackett talks about meeting Nein for the first time when Nein was a high school student. Nein has left the sheriff’s office after 26 years to take a position with the Maine Secretary of State’s Office. (Charlotte Boynton photo)

Brackett also recognized Mason and Nein’s wives, Joanne Mason and Michelle Nein, for their support of their husbands.

LCSO Lt. Rand Maker told the group that when Mason became chief deputy, he was an unknown at the sheriff’s office. “No one knew Ken, but working together as a team we did good things for the agency, and no one is tighter with a dollar than he is,” Maker said.

The last day for both men was Friday, Dec. 2.

“Come Monday morning, Dec. 5, we will take a step back and work through their not being with us any longer,” Maker said. “It will not be easy.”

On behalf of the Lincoln County Board of Commissioners, Commissioner Mary Trescot presented Mason and Nein each with a large painting to remind them of Lincoln County as they continue their law enforcement careers in different directions.

Brackett presented them with special citations for their service and dedication to the county, as well as a monetary gift from the county.

After the presentation, Mason said, “I would like to thank Sheriff Brackett for giving me the opportunity to serve as his chief deputy. Although I am excited to begin my new job, leaving Lincoln County is sad. You are all my family, and I am not going to forget you.”

Nein said leaving the sheriff’s office is “bittersweet,” and leaving what he knows is the hardest part of moving on to something new.

“You are all like family to me. It has been an honor to work with Sheriff Brackett, Sheriff Carter, and all of you,” Nein said, referring to the late William C. Carter, sheriff from 1964-2002.

The two officers received a standing ovation at the conclusion of the event from their fellow officers, county department heads, county staff members, family members, and guests.