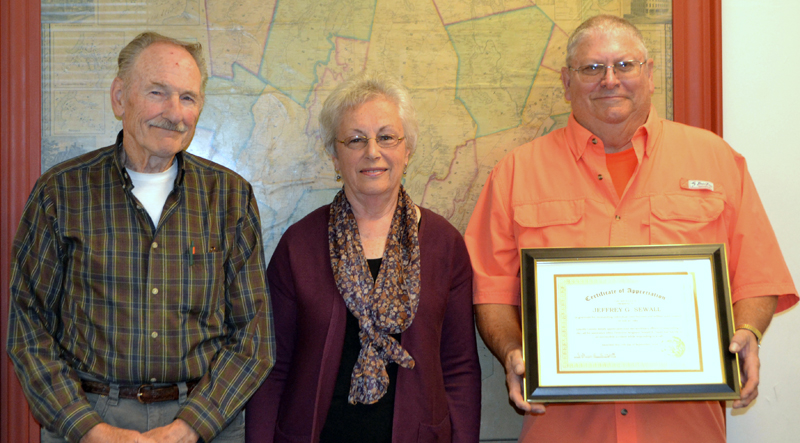 From left: Daniel Davey, Laurinda Cushman, and Jeffrey Sewall at the Lincoln County Board of Commissioners meeting Tuesday, Sept. 17. Daniel Davey and Cushman are the brother and widow of Lincoln County Sheriff’s Office Detective Sgt. Donald Davey, who died in a crash while on duty July 30, 1984. Sewall, a former sheriff’s deputy, responded to the crash. (Charlotte Boynton photo)

Lincoln County will erect a memorial at the courthouse to commemorate the sacrifice of local law enforcement officers who have died in the line of duty.

County Commissioner William Blodgett announced the plan during a meeting of the Lincoln County Board of Commissioners on Tuesday, Sept. 17.

“We hope there will be no more,” Blodgett said.

Blackman, 53, was a part-time deputy and selectman from Whitefield. He and Deputy William Baker responded to a Somerville farm on May 5, 1933 to investigate a stabbing of one brother by another, according to an Associated Press account at the time.

The deputies planned to pick up Gilmore Bowman, 43, and take him to Wiscasset for questioning. Bowman had been convicted of manslaughter 15 years before after shooting a man to death in a dance hall.

Blackman purposely left his revolver in their automobile and told Baker to wait outside. When he told Bowman he wanted to bring him in for questioning, Bowman asked to get his coat from his bedroom.

Bowman came out of the bedroom with a shotgun and killed Blackman as he stood in the kitchen, smoking a cigar, according to the account. Baker confronted Bowman and, when Bowman took aim at him, fired three times and killed him. 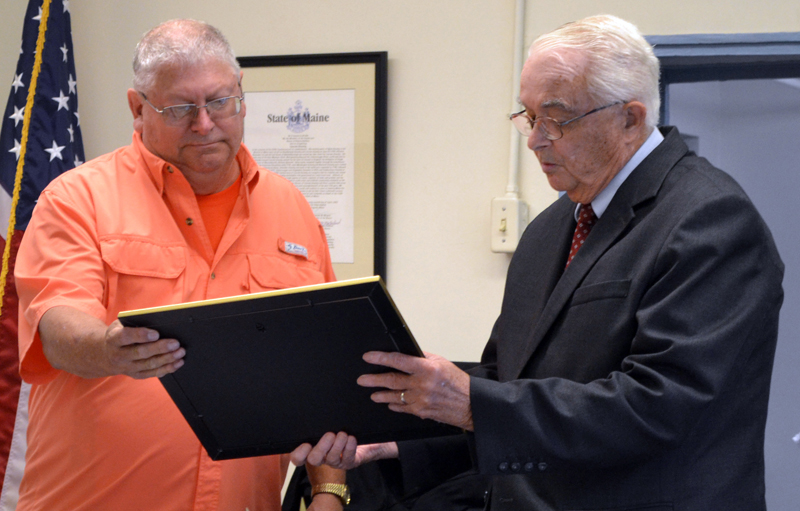 Donald Davey, of Friendship, a 12-year veteran of the sheriff’s office, was responding to a call at about 3 a.m., July 30, 1984. He was driving on Route 1 in Nobleboro, toward Wiscasset, when the tractor-trailer crossed into his lane and ran over his car. The truck driver also died.

The 37-year-old investigator left a wife and two daughters, ages 9 and 5.

The bridge across the Sheepscot River between Wiscasset and Edgecomb is named the Donald E. Davey Bridge in his memory.

The commissioners also presented certificates of appreciation to former Lincoln County Sheriff’s Deputy Jeffrey Sewall, who responded to the Davey crash; and Kathy Blagdon, the dispatcher who received the call.

“These awards are long overdue,” Blodgett said. He presented the certificate to Sewall.

Sewall, who worked for the sheriff’s office for 10 years before retiring in 1989, became emotional as he accepted the certificate.

“There is never a day that goes by I do not think of Don,” Sewall said.

Blagdon, who still works for Lincoln County Communications, was not present for the ceremony and will be presented with the certificate at another time.

Donald Davey’s brother, Daniel Davey, was also a Lincoln County sheriff’s deputy at the time of his brother’s death. He later became sheriff of Knox County and served in the position for 22 years.

Daniel Davey, with Donald Davey’s widow, Laurinda Cushman, and other family members and friends, attended the presentation. Daniel Davey thanked the commissioners for helping to keep his brother’s memory alive.

The memorial will go up within the next few months near the main public entrance to the courthouse, according to Blodgett.