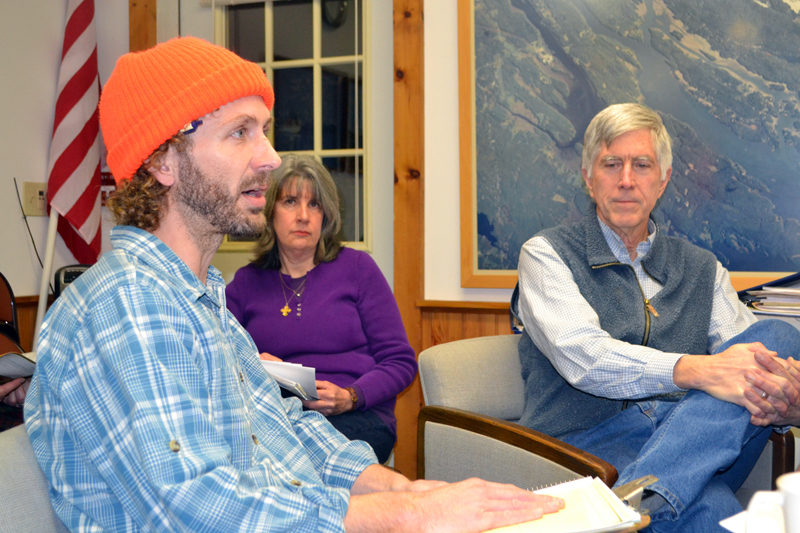 Kyle DePietro and Jeff Tarbox discuss their plans for a craft brewery during a meeting of the Westport Island Board of Selectmen at the town office Monday, Jan. 30. (Charlotte Boynton photo)

The Westport Island Board of Selectmen, at its meeting Monday, Jan. 30, heard about plans for a potential craft brewery on the island, the Sasanoa Brewery.

Kyle DePietro and Jeff Tarbox briefed the board on plans for a craft brewery at the Tarbox Farm, at 62 Tarbox Road. DePietro told the selectmen the brewery would be certified organic and would feature ingredients from the farm and from other Maine sources.

The goal of the process will be to create a superior Belgian farmhouse style of beer, according to Tarbox.

DePietro said his plans are to start small, brewing about 600 gallons a month. During a brief telephone interview, DePietro said there are hurdles to overcome. They must obtain town permits, federal and state licenses, and more before they can start the process. If everything goes OK, he hopes to start brewing in the fall of this year.

The selectmen asked about the brewery’s water and wastewater needs.

DePietro said the farm’s well produces 4 gallons a minute. He plans to have a new septic system designed for the brewery as soon as the ground thaws. He plans to recycle some of the water for irrigation.

Selectman George Richardson suggested that Tarbox and DePietro contact their neighbors to tell them about their plans.

The next step in the process for DePietro and Tarbox will be to meet with the Westport Island Planning Board.

Westport Island Fire Chief Robert Mooney said that within a week of the fire station’s new generator becoming operational, there was a power outage. For the first time in recent years, there were no emergency response issues as a result.

The 50-kilowatt generator was purchased with a Federal Emergency Management Agency grant and a 25 percent match from the town. The cost of the project was $40,698.74.

Mooney thanked the selectmen and the volunteers for their support. Volunteers were Abbott Inc., Dunning Concrete, G&D Cromwell Inc., Roger Higgins, and Mooney.

The selectmen signed a certificate of completion for the project.

The selectmen discussed the new marijuana law that took effect Monday, Jan. 30, and some options the town could consider. The board plans to discuss the issue in further detail at a future meeting.

Selectman Gerald Bodmer suggested sending a survey to residents asking how they would like their town to address the new law. The selectmen discussed a moratorium as one option.

In an effort to raise more funds for the project, the Kennebec Estuary Land Trust initiated a crowdfunding initiative. Dunbar said the goal for the initiative was to raise $15,000, and so far the land trust has raised $7,000.

Westport Island voters, at the annual town meeting in June 2016, voted to donate $50,000 toward the purchase of the 144-acre property on Squam Creek for conservation. According to Dunbar, the land trust has received donations from people from other states.

The total cost of the project is estimated to be $536,000. Dunbar said the land trust has enough money to close in March. Fundraising will continue after the closing, with the money going toward the stewardship of the property.

For Great Maine Outdoor Weekend, the land trust will host a celebration of the property Saturday, Feb. 4, beginning at 9:30 a.m. Activities will include cross-country skiing, snowshoeing, and sledding for children. Hot chocolate and s’mores will be available.

To donate to the Squam Creek project, go to kennebecestuary.org.

Westport Island is developing a new town website, and each committee will have its own page. Town Clerk Gaye Wagner received the OK from the selectmen to send a letter to all town committee chairs inviting them to create a page for their committee.

Information suggested for the committee pages include a description of the committee, a mission statement, and membership information.

The Westport Community Association is working to create a welcome packet for new residents, according to Wagner, and the committee pages will also be helpful to new residents.

The committee pages could also serve as a recruiting tool, encouraging residents to participate in town activities, Wagner said.

The selectmen reviewed a report from the code enforcement officer regarding the need to issue after-the-fact permits for work on the William Miller property on the West Shore Road. The selectmen will meet with the CEO to decide if further action is warranted.

The Wiscasset Public Library sent a request for a $4,720 contribution. Voters will consider the request at the annual town meeting in June.

The selectmen approved a request from the community association to use the historic town hall for the Island Christmas Party on Dec. 2-3, 2017.