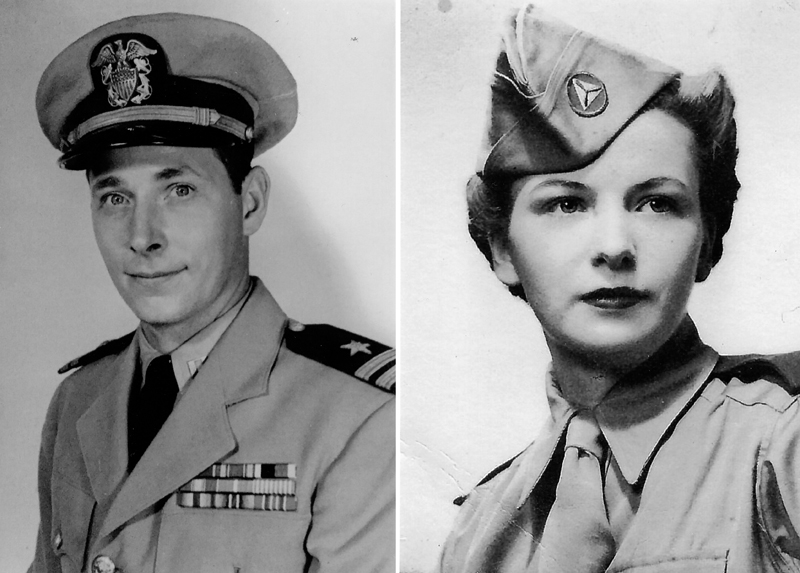 A husband and wife who live in Damariscotta both served their country in World War II: Bill Connell as a merchant mariner and Lyn Connell as a pilot in the Civil Air Patrol and member of the American Women’s Voluntary Services.

Bill would go on to serve in the U.S. Navy Reserve and U.S. Navy, including as an officer and diver during the Korean War. 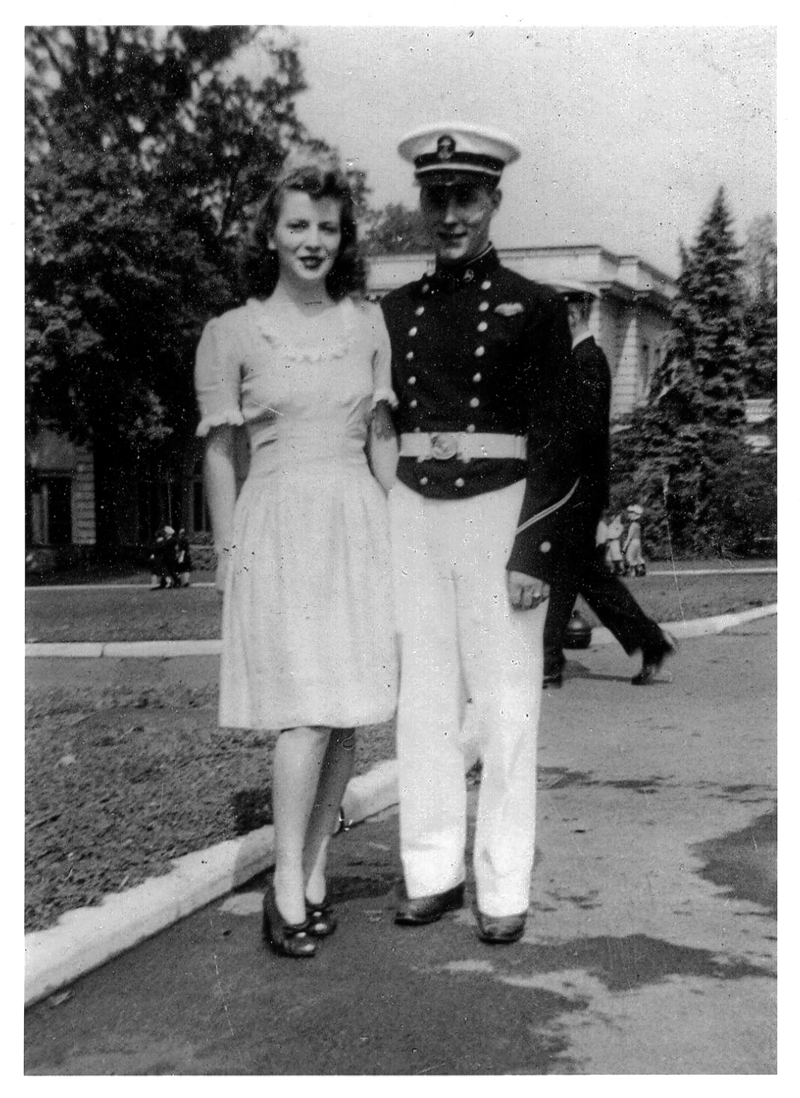 Lyn and Bill Connell at the U.S. Merchant Marine Academy in 1944, shortly after they met. They married in 1945.

The Connells returned from an Honor Flight Maine trip to Washington, D.C. on Oct. 27, their 74th wedding anniversary. They married in 1945, at a Methodist church in Fort Washington, N.Y.

Bill, 94, and Lyn, 92, described the trip as a wonderful opportunity that brought tears to their eyes several times. Visiting the war memorials, watching the changing of the guard at the Tomb of the Unknown Soldier, and seeing the reactions of veterans visiting the memorials for the first time are all experiences they will always remember.

One of the most emotional experiences of the trip was when a group of 5- and 6-year-old children came up to them and asked to shake their hands. “That brought tears to both of us,” Lyn said.

Bill is a 1945 graduate of the U.S. Merchant Marine Academy at Kings Point, N.Y. During World War II, cadets at the academy were required to go to sea. In 1944 and early 1945, Bill made three round trips to France, transporting troops and supplies on a Merchant Marine Victory ship.

Lyn was doing her part in the Civil Air Patrol, the civilian auxiliary of the U.S. Air Force. At the age of 19, she became a pilot. The Civil Air Patrol had three key missions: emergency services, search and rescue by air and ground, and disaster relief. She also joined the American Women’s Voluntary Services, which provided support services during the war, such as message delivery, ambulance driving, and aerial photography.

After returning from a trans-Atlantic trip in 1944, Bill attended a dance at the Merchant Marine Academy on a Saturday evening.

That same evening, Lyn, with her mother, grandmother, and cousin, was taking a train from Long Island to go to a movie. The train stopped near Kings Point. Lyn’s cousin suggested that they go to the dance at the Merchant Marine canteen instead of going to the movies.

Lyn hesitated, thinking it would not be ladylike to go without an invitation. After discussing it with her mother, she decided it would be OK to go, but told her mother: “I will probably be right behind you at the movies; I’m not sure of this.”

After entering the canteen, “I felt a tap on my shoulder,” Lyn said. “Guess who it was?”

“It was Bill. He asked me if I would like to dance. I said yes, and later I asked him if he would like to come to dinner Sunday,” she said.

Sunday was the next day. Lyn knew she wanted to see him again, and she knew her parents would want to meet him right away if she was going to date him.

Bill said that when he saw Lyn come into the canteen, he wanted to ask her to dance before anyone else did.

That first date led to another, and another. One day, while on a ship in the Pacific, Bill radioed Lyn and asked her to marry him. She said yes.

After 74 years of marriage, she still calls him “Lovey” and he calls her “Dear.” That is when they are not using their other nicknames for one another: M.B. (Mama Bear) and P.B. (Papa Bear).

Bill graduated from the Merchant Marine Academy and became an ensign in the Navy Reserve in 1945. After the war he went to Clarkson University, earning a degree in chemical engineering. 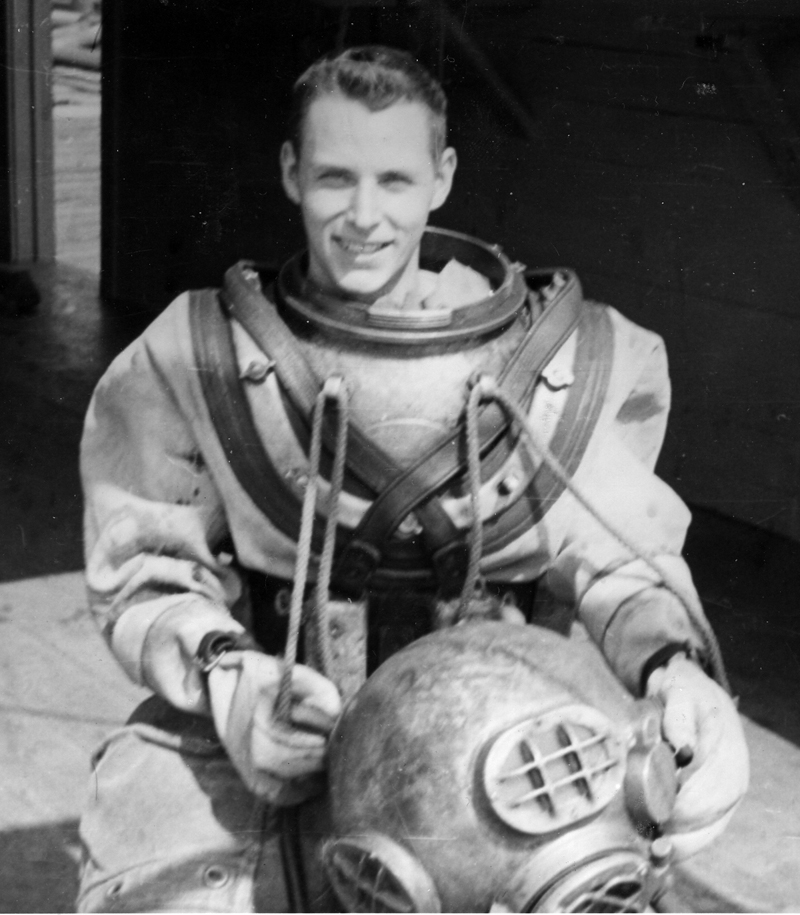 In addition to her service in the American Women’s Voluntary Services and Civil Air Patrol, Lyn worked for Harnett, a division of RCA that made sonobuoys, air-deployed acoustic sensors that detected submarines. The bouys were dropped from an aircraft into the water, where they transmitted signals to the aircraft with the location of submarines in the area.

“During the war, women did everything we could. We learned to fly, we worked in factories, and often did the jobs done previously done by men,” Lyn said.

During the Korean War, Bill went from the reserves into the Navy as a lieutenant. He served on the USS Southerland, a ship built at Bath Iron Works and launched on Oct. 5, 1944. He also attended diving school and became a Navy diver.

After completing their military service, the Connells settled into civilian life. They had three children: Glenn, Laurie, and Scott. Glenn passed away in 2013. 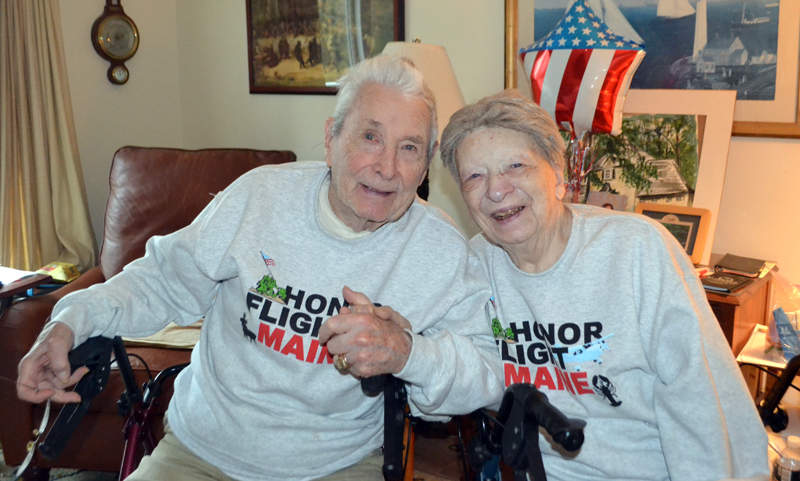 Bill and Lyn Connell relax at home in Damariscotta. The couple returned from an Honor Flight Maine trip to Washington, D.C. on their 74th anniversary, Oct. 27. (Charlotte Boynton photo)

Bill became a chemical engineer with Mobil Oil Co., traveling abroad for many years until taking an early retirement over 30 years ago.

Laurie, their daughter, described her mother as a professional volunteer. “Whenever there was a need, she was always there to volunteer,” Laurie said.

When the children were young, the Connell family would come to Maine to camp at Hermit Island, in Phippsburg, and visit with family members on summer vacations.

A day or so after Bill retired, he flew to Hawaii and navigated a small sailboat back to California with a few friends.

In retirement, the Connells decided to move to Maine. They built two homes, both designed by Lyn, in the South Bristol area, which they later sold.

Bill and Lyn are now settled in an independent retirement home in Damariscotta, enjoying a well-earned retirement.

Even after 74 years, squabbles arise. “Sometimes we argue and I may, at appropriate times, holler at him,” Lyn said. “I have been told that is good for my lungs.”

“She has to holler most of the time anyway, because I am hard of hearing,” Bill said with a chuckle.